Burnshot Bridge closure: alternative route to Kirkliston and beyond

A new bridge is now in place and open to all traffic. It includes a segregated eastbound cycle lane and a shared use path for those heading west. This reinstates the original route from Edinburgh to Kirkliston. The alternative route, via the tunnel under the A90, is still available. 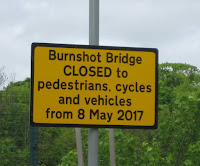 The Burnshot Bridge is currently closed to all traffic – including cyclists and pedestrians. This is the bridge over the main A90 Queensferry Road near Cramond Brig. It lies on the main bike route between Edinburgh and Kirkliston, and its closure is a major nuisance to cyclists travelling between the capital and parts of West Lothian.

Since this article was posted on 17 May, Edinburgh Council have established an alternative route between NCN 1 near Cramond Brig and the Kirkliston Road. This route, which is described below, is easier and safer than the other options, and has the benefit of being signposted - at least in part.

To reach this alternative route, head north on NCN 1 from Cramond Brig (this is the route that goes alongside the dual carriageway, not the longer route through the Dalmeny Estate).

After a short distance, you will see a tunnel on your left that goes under the A90 (see photo below). This is next to the public weighbridge and opposite a bus stop. Go through the tunnel. At the other end, keep on the path as it veers to the left. This takes you onto the dual carriageway - but in a coned-off lane that is reserved for cyclists and pedestrians.

It is advisable to keep well to the left as you cycle in this lane, to keep some distance between yourself and the fast-moving traffic. Also, watch out for cyclists coming towards you. Although it is not obvious, this lane is in fact two-way for cyclists.

After about half a mile, leave the dual carriageway by a slip road. This joins the Kirkliston Road just to the west of the closed bridge. You can now continue on the original route.

If you are cycling in the opposite direction, that is, from the Kirkliston area towards Edinburgh, just reverse the above directions. When you reach the closed bridge, turn right down the slip road onto the dual carriageway, using the coned-off lane mentioned above. Leave the main road at the next exit and go through the tunnel to join NCN 1. Turn right by the bus stop for Cramond Brig and Edinburgh.

Nobody seems to know for how long the Burnshot Bridge will be closed. We'll post more information as it becomes available. In the meantime, feel free to post a comment if you have experience with the route described here.

Edinburgh Council today announced that funding has been found to replace the bridge (which was demolished last November after it was found to be unsafe.) Work on the new bridge is expected to start later this year and will last approximately two years. Meanwhile the cycle route alongside the dual carriageway (mentioned above) is being widened, with better separation from the main traffic flow.

We'll post further information about the replacement bridge as it becomes available.
Posted by Mike Lewis at 09:23