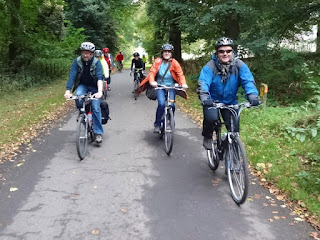 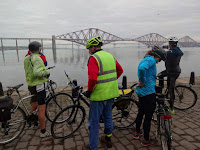 Posted by Glenn Brearley at 22:28 No comments:


For our ride this coming Saturday, Jim will be leading us on a tour of bike paths and quiet roads in the west of the city. We'll be taking in Dalmeny, South Queensferry, Kirkliston, Ratho Station, Gogar and Edinburgh Park. At 25 miles, the ride will be a little longer than usual, but there will be no particular difficulties: just a few hills, and some paths that might be rough in parts.

We'll take our lunch break in South Queensferry. There is no eating place there large enough to hold us all, so we'll spread out among the several cafés and pubs in the town. For those bringing their own food, there is a nice picnic spot overlooking the harbour.

We'll set out from our usual meeting place, at the top of Middle Meadow Walk, at 10.30.
Posted by Mike Lewis at 10:11 No comments:

"Riders down!" in Linlithgow 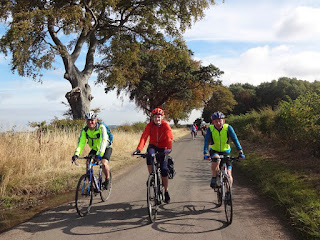 The final 20 Milers Extra ride of the year saw us head to Linlithgow. Good weather, an interesting route taking in some delightful quiet country lanes and a picnic lunch beside Linlithgow Palace made for a lovely day. On the down side, two of the group were involved in a minor accident; which fortunately, involved nothing more than cuts and bruises. As usual when heading out west on one of our longer runs, we met at the Craigleith marker. It was slightly cooler and the skies a little greyer than the last few days as seventeen riders assembled. This made for a managable sized single group and we headed off towards Barnton and Cramond Bridge, where we had our customary pause. We then made our way to Kirkliston where we had a comfort stop at the leisure centre. From there a few short spells on busy roads mixed with some lovely quiet country lanes took us on to Philipstoun. The weather had now warmed up nicely and we had blue skies overhead. At times it felt more like summer than early October. We had a trouble-free run towards Linlithgow. The final run into the town saw us descend a fast steep hill. It was here that disaster struck. At the bottom, the road turned  a corner and the front riders were suddenly faced with a single track bridge crossing the canal with priority to oncoming traffic. With an oncoming car on the bridge, the lead rider braked sharply. The following rider could not stop in time, hit the lead rider a glancing blow and they both went down. The second rider was lucky not to end up under the car. Fortunately, nothing worse than two shaken riders, a shaken car driver and superficial cuts and bruises to one rider was the final outcome. It could easily have been much more serious. Bikes and riders were cleared from the road and the injured rider checked over and patched up. After a short break, the group carried on down a delightful little road that was closed to through traffic which brought us out beside the railway station. From there, a short ride along the busy high street took us to our lunch stop at Linlithgow Palace. Often the group will go into a cafe and rearrange the tables and chairs so we can sit together. Today, two large wooden picnic tables were carried across the grass and placed beside a third. Sitting in the warm sunshine beside the birthplace of Mary Queen of Scots, overlooking the loch, we enjoyed a delightful picnic lunch. Those that remember this year's Pedal for Scotland lunch stop, will be delighted to hear there was no cuss cuss salad in sight! 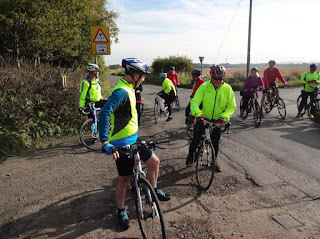 A pleasant ride alongside the canal and then we made our way through the lovely Hopetoun Estate. There was now more cloud and it was a little cooler, but still pleasant. On leaving the estate we passed the new Forth crossing which is progressing well. On through South Queensferry, we made our way onto familiar paths and roads through Dalmeny, Cramond Bridge and Barnton before arriving back at the Craigleith marker.

Thanks to Julia for devising a varied and interesting route to bring to a close the series of 20 Milers Extra rides for 2015. Roll on 2016. A great shame about the accident. But the fact that we were looking at nothing worse than minors cuts and bruises and a couple of shaken up riders, was a great relief.

Posted by Glenn Brearley at 22:00 No comments: