UPDATE: The ride planned for 7 May has now been postponed. I will post further information when a new date for the ride has been decided. This does not affect our normal 20-mile ride for May, which will take place as planned on the 14th.

I am pleased to say that we are about to resume our Extra rides. The first of these rides for 2022 will be on Saturday 7 May. I don't have any details yet of the route, destination or meeting time and place, so for now just note the date. I'll post further information early next week.

These Extra rides are longer than our usual 20-mile runs. We start earlier, finish later and cycle a little faster - although still at a "social" pace (not so fast that you can't keep up a conversation). If you normally finish our rides with energy to spare, you should have no difficulty with these Extras. But if you haven't cycled for a while or feel that you are below average fitness, you may prefer to give them a miss, and to stick with our usual "second Saturday" runs instead.

As the name suggests, the Extra rides are in addition to our standard 20-mile runs, the next of which will take place as usual on 14 May.

Three bridges in the distance

Today's ride saw us head to South Queensferry with a minor detour to visit the Forth bridges viewpoint. After a cool start the temperature rose gradually, such that on the homeward stretch, riders were shedding their jackets. But there was an occurrence at the lunch stop that made us shiver. It's finally beginning to feel as if spring and warmer weather is just around the corner. We also had sunshine for most of the ride and not a drop of rain. 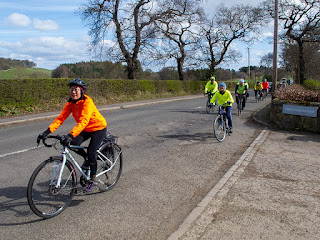 An impressive turnout of 33 riders gathered at the start. There was a good mix of regulars, new faces and riders we hadn't seen in quite a while. Following the leader's route and safety briefing, the large single group headed towards the Leamington Bridge via familiar paths and roads. Pausing at times to regroup, we left the Telfer Subway, Dalry Road and Russell Road behind and headed up the Telford Path. The sunshine had brought out a large number of cyclists, most of who were faster than our long, meandering group. Many didn't have bells which made getting through more difficult. They would get past two or three of our group, little realising that a further 30 would have to be passed before a clear path lie ahead. At Craigleith we took the left fork onto the Blackhall Path. Through Silverknowes, and we were on the quiet roads of leafy Barnton. A solo cyclist caught up with the back of the group on the narrow path that links Barnton Avenue and Barnton Avenue West. Accepting he was going nowhere fast, he took his place at the back of the group and smiled as he said, "it's like the M6 here", before adding, "not that I've ever cycled on a motorway". Emerging onto Barnton Avenue West, he wished us an enjoyable ride and headed off. We took the obligatory pause on the bridge at Cramond Brig before heading up the path beside the A90. We regrouped at the Chapel Gate entrance to the Dalmeny Estate, before crossing the road and heading to Dalmeny village. We didn't take the usual path that leads to the Co-op in South Queensferry. Instead we cut through the new housing estate and rode onwards to arrive at the Forth bridges viewpoint. 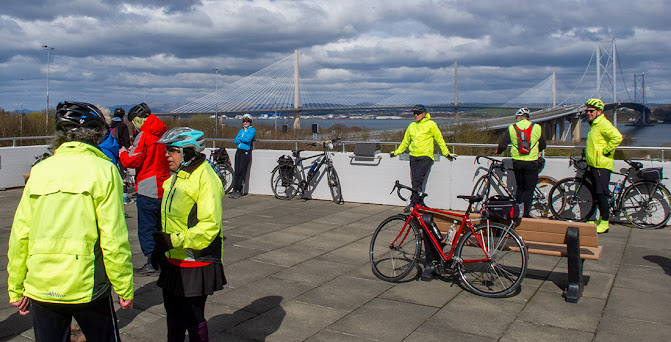 On such a bright clear day, the three bridges looked stunning. After a few minutes to enjoy the view and take photos, the leader rounded everyone up and we rode the short distance into South Queensferry. Just before the high street, the leader turned left down a narrow lane that looked as if it led only to a car park. This wasn't the case. A path took us to the harbour, along another quiet lane and up a short steep hill to emerge in the high street. Another of those unexpected, but delightful discoveries. Whether eating their own picnics or food bought in nearby cafes, most of the group sat at the top of the steps enjoying a great view of the Forth Rail Bridge. It was during lunch that we witnessed something that made us all shiver. A solitary swimmer tip-toed into the cold waters of the Forth for a brief swim, wearing nothing more than swimming trunks. Wrapped in a robe, he climbed the steps and we gave him a well-deserved round of applause which he appreciated. Having finished their lunch quickly, one of our group opted to fill their time with a 4K run! Someone quipped that if they had also gone for a swim, today's ride would have counted as a triathlon for them. 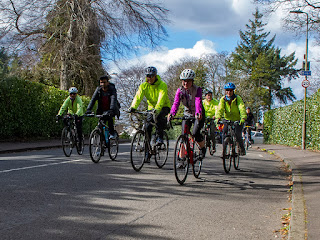 Lunch over, we mounted up and made our way over the bumpy cobbles through the town's one-way system. Just past Hawes Pier, we took the track that led us towards the Dalmeny Estate. It was beginning to feel pleasantly warm as we rode through the estate on a mixture of smooth tarmac, rough paths and a couple of steep hills to emerge at Cramond Brig. There were a few confused faces as we rode across the bridge without stopping. From there, we headed back via the route we had taken out earlier. Once back at the Meadows, the leader declared the ride officially over.

Thanks to Yaz for leading a ride that was enjoyed by all. It was good to have the bonus of visiting the Forth bridges viewpoint, and that little cut-through by the harbour was a delightful discovery. Thanks to Alison for back marking.

Posted by Glenn Brearley at 23:01 No comments:

We've got our April ride coming up on Saturday. Yaz will be our leader and guide. As I write this, the forecast is for a sunny day with only a slight breeze, so we can look forward to a good day out.

Our destination will be South Queensferry. But, as a variation on the normal route, we will head first to the viewing platform at the south end of the road bridge. From here there are stunning views of the three bridges over the Forth (and a good place to take photos). We will then proceed to the old part of the town, where there are picnic spots and cafės for our lunch break (also toilets). The return leg will be via the scenic Dalmeny Estate.

The total distance will be about 22 miles. Most of the route will be on firm surfaces, although there will be a few rough patches in the afternoon, not to mention the notorious Queensferry cobbles. There will be some moderate hills, none of them particularly difficult.

The meeting time and place are as ever: the north end of Middle Meadow Walk at 10.30. Remember, there is no booking system for our rides, and no need to contact us in advance.

With summer on the doorstep, other local cycling groups will be organising rides in the weeks ahead. EasyCycle are running their short rides on the last Sunday of every month; Mellow Velo will be offering their programme of cycling weekends; and the usual evening rides will be starting up again soon. You can find details of all these events on my website: www.cycling-edinburgh.org.uk.

You might also like to know that Pedal on Parliament will take place on 23rd April. This mass bike ride usually attracts several thousand cyclists. It is a light-hearted family-friendly event, not a confrontational demo. More details on the above website.