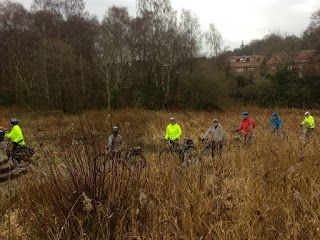 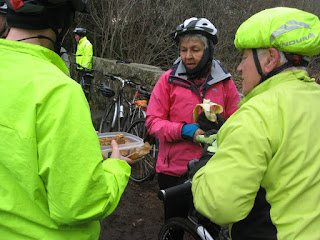 
We've got our monthly run this coming Saturday (13th). I hope you'll be able to join us.

Alan (Orr) will be leading us on a circuit of bike paths and quiet roads to the west of the city, with a lunch stop at Craigie's Farm. The total distance will be just about 20 miles, most of which will be on firm surfaces, although there will be an occasional section that might be rough or muddy. The only serious hill of the day will be the climb up to Craigie's from the Kirkliston Road (just before lunch).

Craigie's Farm has a spacious café serving a good range of soups, salads and sandwiches. There is also a terrace for those who prefer an al fresco lunch. Note that the lunch break will be fairly late - we'll do most of the mileage in the morning - so adjust your appetites accordingly.

Our meeting point is the same as always: the north end of Middle Meadow Walk. Plan to get there in time for a 10:30 departure. The ride should end before dark, but I would advise you to bring lights in case we get delayed.

As always, the meeting point and start time are fixed, but the route and lunch stop are subject to change, depending on conditions on the day.

I'll take this opportunity to remind you to bring a spare inner tube on all our rides if at all possible. Changing an inner tube is a lot faster than repairing a puncture. Don't worry if you don't know how to change a tube; there are usually people willing to help if the need arises. If you don't know what size of inner tube you need, just ask at your favourite bike shop.

That's all for now. Remember, there is no advance booking for our rides. If you are planning to join us, just turn up on the day. 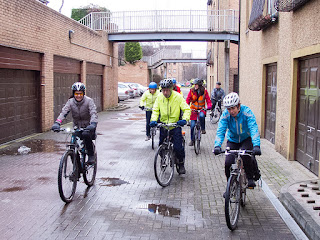 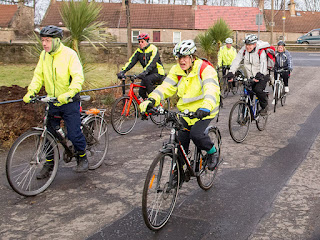 
Posted by Glenn Brearley at 23:17 No comments:


We've got an additional ride this coming Saturday (6th January), which Jim will be leading. This will be a Back-to-Basics ride, similar to the one we did this time last year. It will be a half-day run, taken at an easy pace. If you haven't done much cycling this winter, or if you are feeling below your normal fitness level, this ride is for you.

We'll start from our usual spot on Middle Meadow Walk at 10:30. I don't know the route yet, but the aim is for it to be mostly flat and avoiding busy roads. We'll plan to finish by 13:00. There won't be an official café or pub stop en route, but if anyone wants to find somewhere for lunch after the ride, they will be welcome to do so.

The ride is free and open to all, with no advance booking. Even if you have been cycling all winter, and you are above your normal fitness level, you will still be welcome to join us - provided you are happy with the slower pace.

And don't forget that we've got our normal monthly ride the following Saturday. I'll post a reminder of that next week.