Until we arrived at the start of today's ride, only the leader knew where we were heading. There were a few raised eybrows amongst the regulars when it was announced we would be heading to South Queensferry. We were last there in August; but on that ocassion we took a circuitous route with quite a few unfamiliar sections. All credit to today's leader for managing to do the same without any duplication of August's unfamiliar sections. 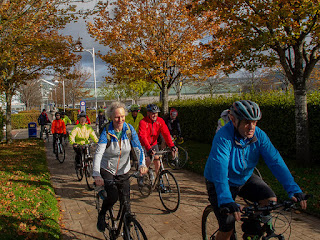 The day dawned bright and sunny with no more than a light breeze and stayed like that for the whole day. It wasn't hot, but was pleasantly comfortable for mid-October. The good weather obviously helped to swell the numbers. The leader gave the customary briefing to the 22 assembled riders. By the time the briefing was over and we were ready to roll away, there were 26 of us. We were soon at the Leamington Bridge. A very short stretch beside the canal, Fountain Park, The Telfer Subway, Russell Road and into Roseburn Park - all very familiar. Through Balgreen and on to the path that took us behind the Forestry Commission HQ on Corstorphine Road. From there the back streets of Carrick Knowe and Broomhouse took us to the Gyle Shopping Centre. It was good to leave the busy car park behind and head through the much quieter Edinburgh Park. We nipped through the subway beneath the City Bypass (often referred to as "the smelly bridge") to be faced with a slightly muddy climb to reach the road; that explains why we usually go down that way. Gogar Station Road then took us to the Royal Bank of Scotland HQ. Up and over the RBS bridge and we were riding alongside the busy A8 where we made better progress than the traffic on the road. Leaving the A8 at the Maybury juction, we rode past the casino and alongside Maybury Road before turning off down the much less busy Cammo Walk. A few twists and turns through back streets, across the busy Queensferry Road and a sweetie stop at Cramond Brig. Under the subway and the path took us to Burnshot Junction. Along the road, a right turn and we climbed up to Dalmeny village. Through some decidedly unfamiliar back streets of South Queensferry and we arrived in the centre of town for our lunch stop. 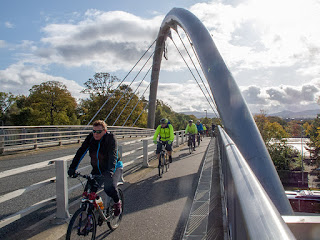 As the riders had spread themselves around various cafes and the picnic spot in the town, the decision was made to meet at the Co-Op. At the agreed departure time, the leader got a call from one of a group of five regulars to say they had taken a long time getting served and were still eating at the far side of town. It was decided the main group should set off and the others would either catch us or make their own way back. Unfortunately, one of the missing group was the back marker, so that mantle was passed to another rider. The new back marker committed the cardinal sin of mentioning the "p" word during a ride. Sure enough, as we entered the Dalmeny estate, up went the shout, "puncture!" There was no shortage of helping hands and equipment in the form of various pumps and gas canisters. The puncture was soon fixed. The delay had allowed the missing five to catch up; so we headed into the estate as a complete group again.
Through the estate which was looking beautiful in the sunshine, up a stiff little climb and down a lovely descent and we were back at Cramond Brig. A brief halt (as is the custom) on the bridge before heading back to town. There were no further delays and the route was the usual one back through Barnton to Craigleith, down the Roseburn Path to the Russell Road zig-zags. Here the leader declared the ride officially over. 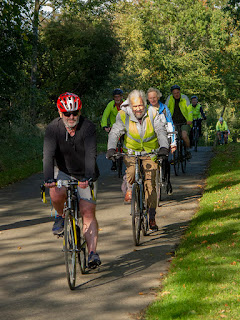 Thanks to Bill for leading us on an interestingly different route to South Queensferry. It just goes to show that with a little forethought and planning, going to a familiar place can still be interesting. As the saying goes, "getting there is half the fun".

Posted by Glenn Brearley at 23:35 No comments:


Our next ride will take place this coming Saturday (12th). I don't yet have any details of the route or destination; all will be revealed at the start. As always we'll meet at 10.30 at the north end of Middle Meadow Walk. The ride is free and open to all, with no advance booking.

I look forward to seeing you on Saturday.