I first got to know Alec Mann back in the early 2000s, when he and I were both regular riders on the Spokes Sunday bike rides. When I helped to set up Edinburgh 20-Milers in 2004, Alec was one of our first members and quickly became a familiar figure in the group. His last ride with us was last month's run to South Queensferry. He died a couple of weeks later at the age of 71.

Alec was very much a stalwart of the local cycling community. He frequently cycled with Mellow Velo and organised and led many of their cycling weekends. He was known for his near-encyclopaedic knowledge of local bike routes, and always took care to recce his rides in great detail. He was a long-standing member of Spokes, and served on their planning committee. He helped with the preparation of Spokes' bike maps, and was meticulous in checking their accuracy. As well as cycling, he enjoyed walking, and often went out with the walking group at St Peter’s Church in Lutton Place, where he was an active member of the congregation.

Alec Mann was born in St. Albans in 1951. Because of his father's work, the family frequently moved around the country, so Alec spent his childhood in various places, including Altrincham, Bristol and Edinburgh, amongst others. To avoid having to constantly change schools, he attended Shrewsbury School as a boarder. He then went to Edinburgh University where he developed a deep interest in computer science. This was to become the basis of his career. He remained at the university, working mainly at the King's Buildings as a software developer in the agricultural sector. He was latterly a consultant with Biomathematics & Statistics Scotland where he provided technical and statistical support for various agricultural research projects. He retired a few years before his death.

Alec is survived by his mother (aged 96 and still independent), a sister, brother, nieces and a great-niece. I know that the 20-Milers membership will wish to join me in passing on our condolences to his family.

Alec's funeral will take place in the Main Chapel at Mortonhall Crematorium, Howdenhall Road, on Thursday 27 October at 14:00. No flowers, please. There will be a collection in aid of Bethany Christian Trust.

I don't know where we are 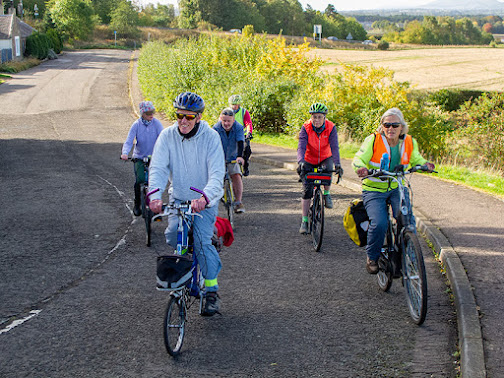 Cockenzie House was today's destination. The Meadows, Musselburgh and Cockenzie House - a quite straight forward ride by a well known route then? Not at all. At the briefing, the leader informed the group that whilst much of the route would be on familiar roads and paths, there would be a couple of stretches that would be completely new to most. So the scene was set for an interesting route, with some nice East Lothian scenery thrown in. The weather forecast suggested sunny intervals, pleasant temperatures and no rain. As it turned out, two out of three ain't bad. Good weather and the promise of an interesting route led to a turnout of 28 riders - second highest of the year. 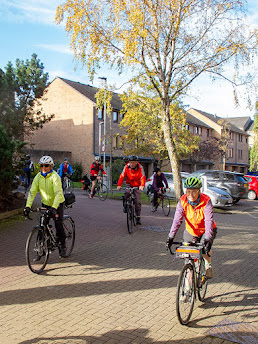 Not long after leaving the Meadows, we came across an obstacle. We couldn't cross St Leaonard's Street at the usual crossing as new tar had been laid a short time before our arrival. A very helpful road worker informed us we would have to go up the pavement and cross further up. This slight detour didn't delay us for long. Safely across, and we were soon through the tunnel and travelling down the Innocent Railway. At Brunstane station, we turned left as if heading for the Brunstane Burn path. But we carried straight on to follow a less familiar path as it threaded through the Gilbertstoun estate. With the first unfamiliar section behind us, we re-joined the usual route to Musselburgh station. Paths, quiet back streets and a footbridge over the River Esk saw us on The Grove for a short distance, before turning onto a path that took us to Inveresk. A left and right and we were on Crookston Road, which peters out to become a path running alongside the A1 slip road. A short pause to regroup beside the site of the Battle of Pinkie, and we were on the road towards Whitecraig which crosses the A1. A left turn, and it looked as if we were heading for the steep climb that is Fa'side Hill. Those that knew where they were, looked worried. There had been no mention of this steep hill at the briefing. The leader then turned left onto a flat strtech of road and stopped. We then had a stop for cake thanks to Iain. Pressing on towards St Clement's Well, there were several comments about how beautiful it was riding past sheep grazing in the fields. The comment, "I don't know where we are" was also heard from many. The road ended and a path lead us on a footbridge over the A1 to emerge amongst the new houses being built on the edge of Wallyford. A track led us between the unfinished houses to emerge at Wallyford Industrial Estate. Down to the traffic lights, turn right and we were heading towards the top side of Prestonpans. We stayed on that familiar road until we turned left and took a path down to the site of the Battle of Prestonpans. Back on the road for a short stretch and we arrived at Cockenzie House for our lunch stop. Most of the group headed to the cafe, but a few opted to picnic in the park across the road where they dined in the warm sunshine. 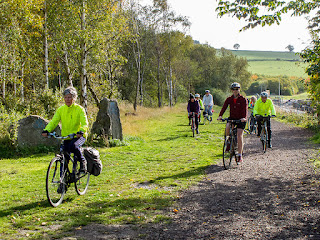 We left Cockenzie House by the rear entrance. This avoided the main road and took us past Cockenzie harbour. Avoiding the main road, we were soon on the new cycle path. With no shelter, this was where we were hit with a brief but heavy shower. Back onto the coast road, we left Prestonpans and joined the cycle path beside the Firth of Forth. Unfortunately, due to the ongoing flood defence works, a section of the coast path is closed. This meant we had to re-join the road for a while, before turning off and getting back on the coast path. Onwards to Fisherrow Harbour for a comfort stop before joining the road towards Portobello. At the bottom of Milton Road we took the Brunstane Burn path to Brunstane station. The run back into town saw us retrace our outward route from the morning. We had another slight delay at St Leaonard's Street. The tar was now dry, but the crossing was not working and traffic was heavy. Back at the Meadows the leader declared the ride over.

Everyone seemed to have enjoyed the ride. There were no problems and it lived up to expectations about seeing new places. A successful ride. What more can anyone ask for?

Posted by Glenn Brearley at 23:25 No comments:

I hope you will be able to join us this coming Saturday (8th) for our October ride.

One of the nice things about our rides is that they provide a chance to discover new and unfamiliar bike routes. This month's run is no exception. Glenn will be leading us into East Lothian, mostly on familiar roads and paths, but with a couple of stretches that I'm sure will be completely new to most of the group. It promises to be an interesting route, with some nice scenery as a bonus.

The ride will be slightly longer than our usual "second Saturday" outings: about 25 miles in all. But there won't be any really nasty hills, and we'll be riding on good surfaces most of the time. There will however be a few rough patches that might be muddy in places. There will also be a couple of stretches on main roads, although with luck these won't be too busy.

For our lunch stop, we'll head to Cockenzie House. There is a friendly cafe there which offers a good range of snacks and light lunches. For those of us who prefer to bring our own food, there are plenty of places to picnic in the house's grounds or in the park across the street.

We'll meet at our usual spot at the north end of Middle Meadow Walk in time for a 10:30 departure.

Unfortunately, we haven't managed to organise another of our Extra rides this year. There simply wasn't time to arrange this before the autumn weather sets in. But rest assured that they will be back next spring. We did run four very successful Extras this summer, which is four more than in each of the previous two years. I hope you enjoyed them as much as I did.

We will, of course, continue our standard rides throughout the winter. Look out for an announcement of our November outing nearer the time.