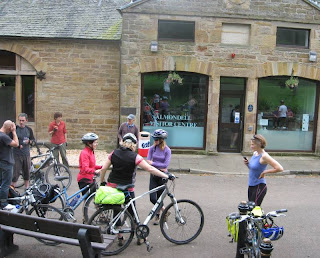 For our third Extra ride of the summer, Jenny Meek led a 21-strong group on a sortie into West Lothian. It turned out to be one of those rides where all the ingredients are just right: a delightful route, with quiet roads, well-surfaced bike paths, and mostly gentle gradients; an interesting lunch stop; congenial company; and, above all, near-perfect cycling weather (most of the time).

From our meeting point at the Water of Leith Visitor Centre, we took the canal to Hermiston House Road, then weaved through a series of pleasant country lanes by way of Gogarbank and Bonnington Mains, before re-joining the canal for a crossing of the lofty Almond Aqueduct. We entered Almondell Country Park at the north entrance, and enjoyed a fast freewheel to the Visitor Centre, where we stopped for a toilet break and general regrouping (see photo).

The next stage was on NCN 75 as it follows the fast-flowing Almond through a deep wooded gorge. This is a tricky path, with several narrow and steep sections. Inevitably we had to dismount a couple of times to haul our bikes over some difficult bits.

We emerged from the park in south Livingston. Now, this is a part of the country where I usually get myself lost (the trouble with the bike paths in Livingston is that there are so many of them). But Jenny's diligent recces had paid off, and she led us unerringly past the civic centre and St. Margaret's Academy to reach our lunch stop in Livingston Village

This was something of a revelation to most of the group. Livingston Village is the original Livingston, before the arrival of the new town in the 1960s. It dates back to the early 12th Century, and was a typical West Lothian farming community. Today, the village is still intact, despite being entirely surrounded by the new town. Its focal point is the 18th Century Livingston Inn, where we enjoyed a leisurely al fresco lunch.

After lunch, we took the well-surfaced bike path that runs alongside the Edinburgh to Bathgate railway line. We then turned right at Uphall Station onto a somewhat rougher path, which eventually led us onto the dramatic Camps Viaduct. From here, we were able to look down onto the path along the Almond that we had traversed a few hours earlier.

A mile or so later, we re-joined NCN 75 for a mostly downhill stretch via Kirknewton, Long Dalmahoy and the Herriot-Watt campus. Up to now, the day had been mostly warm and sunny, but as we reached the canal for the final leg, it turned cloudy with some spots of rain. So we quickly got to the junction with the Water of Leith path, where we went our separate ways. At just over 35 miles, it was another highly successful ride.

One of our largest ever groups - 34 people - showed up this month, with Mike leading and Ken as the crucial back-stop. We followed a similar route to last month as far as Colinton Road, then continued south and east alongside the bypass to Mortonhall Garden Centre, where many people had lunch in the cafe. Others had brought packed lunches and sat in the courtyard of the Stables Bar in the sun. The weather was lovely, although maybe a bit too warm given the height of climb today's ride involved (mostly gentle gradients though).

After lunch we turned north back towards town, climbing a little way behind the Stables Bar and then following a track beside the camp site due east. A lovely bit of downhill wheeee followed, then we turned onto the Hermitage of Braid path and started going uphill again. Recent heavy rain has gouged a horrendous gash in the path along there - a couple of feet deep; cycle with care along the edges. Most of the path was fine though, and not muddy at all really. At the top of the path we doubled back on ourselves to go along Hermitage Drive with some beautiful views of the city, then down and through Grange to get back to the start.

Total distance today was only about 16 miles, but with the large group, the warm weather and the hills, it felt like a good exercise.


View 20milers to Mortonhall Aug12 in a larger map

Next month's 20miler ride is on Saturday 8th September, starting at 10.30am in the normal place, however next Sunday (19th August) there is a longer ride (about 30 miles) starting at 10am at the Water of Leith visitor centre on Lanark Road.
Posted by Livia at 16:25 No comments:

Mike will be leading this Saturday's ride (11th August, 10.30am) on bike paths, forest trails, suburban streets and parkland on the southern edges of the city - some pleasant countryside with fine views. The total distance will only be abut 17 miles, but that doesn't mean you'll be left off lightly. There will be a number of steep-ish hills and a few rough tracks, and we'll also have several short stretches on main roa

ds. Fortunately, we'll get most of the climbing over with early, and have some nice long freewheels on the way home.

The lunch stop will be at the Mortonhall Garden Centre, where there's a spacious cafeteria. Those who prefer a pub lunch can opt for the nearby Stables Bar, which is also a good choice for those of us who like to bring our own food (plenty of seating in the courtyard).
20-Milers Extra (19th August)
Our second August ride will be somewhat longer and faster than our usual outings. These Extra rides are aimed at those who have no difficulties keeping up with our normal 20-mile runs, and now want something just a little more demanding. We start half an hour earlier than usual, finish a little later, and take slightly shorter breaks. But we still pedal at a sociable speed, and still wait for stragglers.
Jenny Meek will be leading this month's Extra. She's worked out an excellent 33-mile route through the West Lothian countryside, with an especially nice lunch stop. I'll send you more information nearer the time, but for now, you might like to note the date (which is a Sunday, not our usual Saturday), the non-standard starting point (the Water of Leith Visitor Centre in Slateford Road), and the fact that the ride starts at 10.00
Remember, all our rides are completely free. You're welcome to bring your friends, and you don't need to let us know whether or not you plan to come along - just turn up on the day.
Posted by Livia at 20:43 No comments: