How two became one 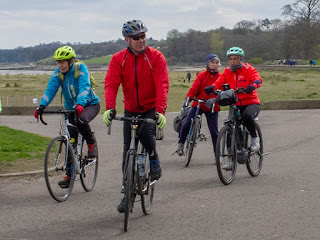 Every now and again something unexpected happens on one of our rides. Today was such a day. As would be expected, the first group set off first with today's leader at the helm. A few miles into the ride, the second group caught up when a puncture delayed them. The leader waved the group through and told them to carry on. As the day unfolded it became clear that this would be the order for the rest of the ride.

A light breeze and sunshine greeted the 37 riders that started today's ride. It was good to see quite a few new faces in amongst the familiar ones. It has been quite a while since we had such a large turn out. As a result, we split into two groups with the first group heading off ten minutes before the second. Via the familiar route taking in Bruntsfield Links, Leamington Bridge, the canal, Telfer subway and Gorgie Road, we arrived at the Russell Road zig-zags. Up them and we were on the Roseburn Path heading for Granton. The first group were delayed by a puncture near the Granton gasometer. The leader waved the others through and told them we would all meet up at lunch. From there we took Silverknowes prom to Cramond where we had a comfort and sweetie stop. On our way again, past Cramond Falls and up the stiff little climb that is School Brae to join Whitehouse Road. A right turn down Peggy's Mill Road before dropping down to join the River Almond Walkway. We made our customary stop at Cramond Brig before taking the off-road path beside the river. It was a bit rough and muddy in places, but everyone made it through without incident to Grotto Bridge. The run along Turnhouse Farm Road, beside the airport saw us battling into a strong headwind. The path beside Edinburgh Gateway station led us to the Gyle Shopping Centre car park. Once safely across that, we left the hustle and bustle of the Gyle behind to take Gogar Station Road to our lunch stop at Heriot Watt University. As ever, there was plenty of space for us in the cafeteria. The leader's group arrived some five riders short. They had missed a turning and had to retrace their steps. As a result, by the time they arrived, the first group were ready to leave. 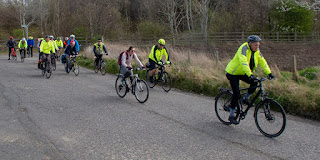 Lunch over, we joined the canal and began heading back towards town. After a stretch beside the canal, we left it at Cutlins Road. Bankhead Drive, Broomhouse Drive and the path beside the tram line led us to the impressive old Jenner's Depository building. From there we took the Water of Leith path past Murrayfield and at the Russell Road zig zags the leader declared the ride officially over. Despite the mixing up of the groups, the puncture and the lost riders, the ride went well and everyone seemed to enjoy themselves. Thanks to Jenny for leading us on an interesting [some may even say dramatic] ride. Was good the way she mixed up the route. Quite a few sections were familiar, but the way they were threaded together made things seem quite different. Also good to have a decent bit of off road in the mix.


Posted by Glenn Brearley at 23:07 No comments:

Ride to Heriot-Watt on Saturday

This is to remind you of our ride this coming Saturday (13th April). We'll be heading to a familiar destination but by an unfamiliar - and interesting - route.

Jenny (Tizard) will be leading us on a tour of bike paths and quiet roads that involves the Granton waterfront, the River Almond walkway, the Cammo Estate and the road at the back of Edinburgh airport. We'll stop for lunch at the Heriot-Watt campus, then head back to town via the canal, Edinburgh Park and Murrayfield.

Our lunch stop will be in the university cafeteria. This is a very spacious eatery where we usually get served quickly and efficiently. There is usually at least one hot dish on offer, as well as soup, baked potatoes, sandwiches, etc. For those of us who prefer to bring a packed lunch, there is no problem in eating this inside the cafeteria.

Note that most of the cycling will be in the morning, and the lunch stop will therefore be quite late. You might want to bring a bar of chocolate or piece of fruit to keep the hunger pangs at bay during the morning.

The total distance will be 24 miles. It will be reasonably flat, with just a few moderate hills. There will also be one or two stretches of rough paths that might be muddy.

As always, we'll gather at the north end of Middle Meadow Walk in time for a 10:30 departure.
Posted by Mike Lewis at 08:00 No comments: