A rookie leader, and a large turnout


It's always good when someone that hasn't led a ride before steps up and volunteers. It often results in
a new approach, new ideas and a new route. It also bodes well for the future of the 20 Milers. Most of
today's route wasn't new, but we have usually done it in the opposite direction - so, different in that
way. The ride took us out to Musselburgh, then on to Dobbies Garden Centre via Dalkeith. We returned to town via Gilmerton and Craigmillar. 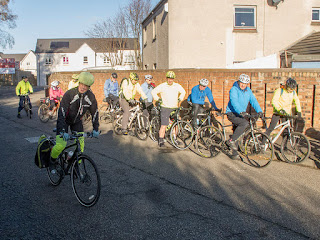 We had a fine, dry, sunny, if slightly chilly day. It was beginning to look as if a small turnout was on the cards. But, as the departure time grew closer, more and more riders arrived. Some cut it so fine that they arrived midway through the briefing. By the time we rolled away, there were thirty of us. Very impressive for a November ride. Two stalwarts of the group (who have only missed a handful of rides between them over a number of years) noted how often there has been the situation where a rookie leader has had to contend with a rather large group. Today was no exception. For a number of reasons, we also ended up riding as one group. From the Meadows we headed to the Innocent railway. Through the tunnel and  on familiar paths as far as Musselburgh station. We had a stop there in the sunshine for sweets and cake. All replenished, we headed off again. We crossed the main road into Musselburgh. It was easier than usual as the traffic was snarled up and going nowhere due to what looked like a nasty accident. From there the delightful path beside the River Esk took us to Whitecraig and on to Dalkeith. Some twiddling through back streets, through parkland and we found ourselves at a kissing gate that brought us out into a new housing estate. Not sure who thought it would be a good idea to put a kissing gate on a recognised cycle path. It certainly made getting thirty cyclists through quite a chore. After that we negotiated the horrible Eskbank roundabout, crossed the busy A7 and arrived at Dobbies for lunch. The leader told everyone we would be leaving at 1345. Despite how busy the resturant was, we all got served quite quickly. Thirty-five minutes earlier than expected, the leader told us all that we were ready to leave. Alas, one rider had just gone to get a second coffee and a cake. As their bike was locked to two others, that meant at least three of us would not be leaving early. What with that and others wandering round the garden centre, we eventually left at 1345. 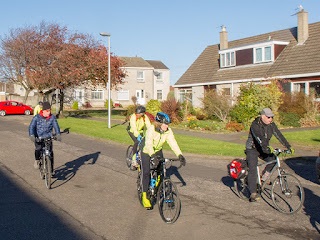 We left Dobbies and took the shared use path beside the busy road back to Gilmerton. We cut through the lovely Drum estate. We were followed by an estate worker in a small truck. We couldn't help but wonder if he was making sure we didn't loiter and ensured we left the premises promptly. Across Old Dalkeith Road, through the quiet back streets of Danderhall and we emerged on The Wisp. A short run down there and we turned off to cut through towards the Royal Infirmary. A run through Craigmillar Castle Park, across Peffermill Road, through the industrial estate and we were back at the Innocent railway. From there it was an easy run back to the Meadows via the Innocent tunnel. Everyone seemed to have enjoyed the ride. We had no mishaps and the weather had been kind to us. Thanks to Julia for leading a good ride with such a display of Teutonic efficiency. We'll gloss over the glitch at lunchtime as this was her first time as leader.


We've got our November ride this coming Saturday (11th). This should be a particularly interesting ride because our leader, Julia (Loecherbach), has succeeded in finding a lunch venue which we never visited before as a group (as far as I know). It is the spacious self-service restaurant at Dobbies Garden Centre in Lasswade. They do a good range of soups, sandwiches and snacks, and the service is reasonably fast. There are also seats outside for those of us who want to brave the November temperatures for a picnic.

The route will be fairly straightforward: about 22 miles in total. There will be a couple of moderate hills, just before and after lunch, but nothing else to worry about. We'll head out via the Innocent path, the River Esk walkway and Dalkeith, returning by way of Danderhall and Gilmerton.

The meeting time and place are as constant as the Northern Star: 10:30 at the north end of Middle Meadow Walk. And as usual the ride is completely free and open, so there is no need to reply to this post.

Now that the clocks have gone back, this would be a good time for us all to check that our lights are in good order. Sunset on Saturday will be at 16:15. Although the ride should have finished by then, it might well be dark by the time you get home. So be sure to bring your lights on the ride, and check that they have plenty of juice.

Some of you have asked me if our traditional Christmas morning ride will take place this year. Yes, we will definitely have a ride that morning. I don't have any further information just yet, but will post full details here in due course.
Posted by Mike Lewis at 09:00 No comments: