Today's ride had a feeling of autumn about it. No, the trees hadn't begun to change colour. There wasn't that autumnal nip in the air - the weather was nothing special; it was pleasant, not too hot or too cold, there was a short spell of light drizzle that came to nothing and it was overcast with a light wind. Wasps! It was the number of wasps affecting the outdoor diners at lunchtime. It was good to eat outdoors at Craigie Farm, but we were plagued with numerous annoying wasps. Sixteen riders made the start. We were given one of the most detailed briefings ever from the leader. It seemed as if every road we would travel on, was named and every turn described. All very commendable, but somewhat wasted as phrases like, "he lost me after the Leamington Bridge" were overheard. 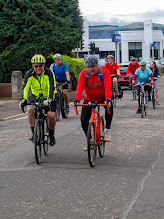 Fully briefed we headed off to the Leamington Bridge via the usual Bruntsfield Links route. We left the canal and were soon on Dundee Street. Due to roadworks and a one way system, we deviated from our usual route to Murrayfield via the Telfer Subway. Instead we went down Henderson Terrace and along Gorgie Road before turning right down Mcleod Street to get to Russell Road. This detour was unfamiliar to many, but got us to where we needed to be. Past Murrayfield, through Carrick Knowe, the quiet backstreets of Broomhouse, Gyle Park and we emerged beside the busy Glasgow Road. All safely across and we were on the quiet Dechmont Road. We had to negotiate six steps, but were soon speeding past Craigmount School. The quiet Craigs Road took us to the busy Maybury Road. As there is no crossing and a very narrow central reservation this can be a difficult road to get a group safely across. But today the temporary traffic lights [that probably annoyed the drivers] made it a doddle to get across. We continued along Craigs Road with Edinburgh Airport to our left. This area is a huge building site with numerous houses due to be built. Temporary traffic lights delayed us slightly, but we were soon on peaceful country roads just a stone's throw from the airport. We turned off and a rough track through the woods took us down to the delightful Grotto Bridge which crosses the River Almond. After a brief stop to admire the view, we pressed on through the eerily deserted Craigiehall army housing estate. A cycle path beside the A90 took us to the Kirkliston road. A short stretch on this road and we were soon turning right for the steep climb to Craigie Farm, which would be our lunch stop. 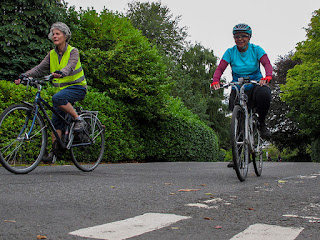 Despite the wasps, everyone seemed to enjoy their lunch and fortunately no one got stung. For some unknown reason, lunch stops often seem to be followed by a steep climb. Today it was the opposite - a lovely steep descent. At the bottom of the hill we joined the cycle path beside the A90 and began our journey back towards Edinburgh. A familiar route via Cramond Brig, Barnton, Davidson's Mains, the Blackhall and Roseburn paths, the zig-zags, Russell Road and the Telfer Subway saw us back at the Meadows where the leader declared the ride over.

It may be only the second 20 Milers ride in fifteen months, but it's good to feel that we might just be heading in the direction of some sort of return to normality. Another good ride that seemed to be enjoyed by all. The weather was pleasant, if nothing special; but considerably warmer than in January when this route is usually ridden. Thanks to Alan for leading, finding a way around the roadworks and giving one of the most in depth briefings of all time. Thanks to Mike for back marking. Fingers crossed that this is the 20 Milers back in business.

Posted by Glenn Brearley at 23:43 No comments:

It was a pleasure to see many familiar faces on our first post-lockdown ride last month. This was a limited ride with some Covid precautions still in place. In order to keep the numbers manageable, we decided not to publicise it widely. And we made a point of staying out of doors the whole time. Thank you all for your cooperation in that respect.

I am pleased to say that our September ride (details below) will be much more like a normal ride. We are not placing a firm limit on numbers, so feel free to invite your friends. If a large number turn up, we will split into two groups, with ten minutes or so between them. We still encourage you to bring a picnic lunch, but there will be a cafe option for those who prefer.

The ride will take place next Saturday, 11 September. We will meet at our usual spot at the north end of Middle Meadow Walk, near the junction of Lauriston Place, in time for a 10.30 start.

For this ride, our leader, Alan, has plotted an interesting and unusual route through the west of the city. Most of the route is on well-surfaced paths and quiet roads, although there will also be one or two rough paths, as well as a couple of short stretches on main roads that might be busy with traffic. There will some gentle hills, and one fairly steep climb just before lunch. The total distance will be about 22 miles. Most of the mileage will be in the morning, with a fairly short run home in the afternoon.

Our lunch stop will be at Craigie's Farm. The cafe there is now open again, but there have been some changes since our last visit. They now only do table service with a reduced menu, and there is a limit on the number of people sitting at each table. This means that the service is likely to be slower than before. For that reason, you may prefer to bring a packed lunch. There are picnic tables outside the cafe.

Please keep in mind that the pandemic is not yet over. We will continue to maintain a measure of social distancing where possible, even though this is no longer a legal requirement (out of doors). And of course you should not join the ride if you or any members of your household have Covid symptoms, have recently received a positive result from a Covid test or have been told to self-isolate or go into quarantine.

I think that covers everything. I'll look forward to seeing as many of you as possible on Saturday.