Quick, we need a Plan B! 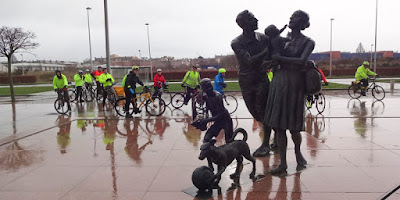 For the second time in as many months, today's planned route to Musselburgh (with the promise of some hidden gems and little known parts of the Honest Toun) fell victim to treacherously icy conditions. The writer (who should have been today's leader) grew increasingly concerned with the under-wheel conditions as he made his way towards the start from Musselburgh. In the interests of safety, the decision was made to think up an alternative route at short notice. The depth of knowledge of Edinburgh cycle routes within the group paid dividends. After the briefest of head-scratching, a new route was hatched and the group was ready to roll with a stand-in leader. Ice and snow may have been a problem further out; but within the city centre it was merely cold and wet. Twenty riders braved the conditions to make the start. This made a single group managable. At least that was the theory. Breaking with tradition, we made our way onto the busy roads that would take us across the Royal Mile, down the Mound and across Princes Street. A combination of traffic lights and Saturday morning traffic soon had the group well and truly split up. After several stops to regroup, we headed through the Rodney Street Tunnel and onto the Warriston Path to Leith. A combination of bumpy cobbles with wet old railway lines sunk into them led to hairy moments for a couple of riders. We then skirted Ocean Terminal and meandered around quiet back streets by Western Harbour Breakwater. A short spell on busy roads around Newhaven followed. That wasn't pleasant, especially as it turned quite wet. It was nice to leave the busy roads behind and make our way through Granton on cycle paths. But there was no improvement in the weather. Via the Telford and Roseburn paths we made our way to our lunch stop at the Gallery of Modern Art. In the final few minutes of our approach the rain-cum-sleet had turned to light snow. The wetness of the roads and paths were the reason it didn't settle.

What a relief to get into the cafe at the Gallery of Modern Art. It was so busy that we were forced to spread ourselves over several seperate tables. Before long we had the place looking as if it had been invaded by a bedraggled group of rufugees - we did get some funny looks! 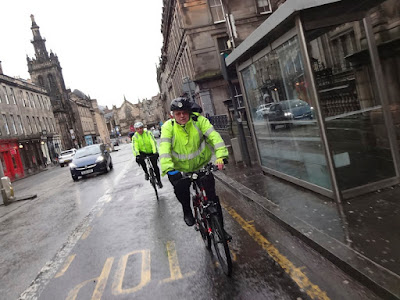 Working with such a flexible and ad hoc route; had the weather been more agreeable, we may have taken a meandering way back to the finish and added a few extra miles. As it was cold and still snowing as we departed our lunch stop; no one argued with the wise decision to head back via the shortest and quickest route. We carved our way through various back streets to the west end, through Festival Square and back to the Meadows.

At a mere 13 miles, this was one of the shortest 20 Milers rides for quite some time. Given the weather, no one was complaining. Thanks to Mike for stepping in at the last minute and coming up with a worthwhile route. That run to Musselburgh will happen at some point. It probably owes us a warm day of wall to wall sunshine!

Posted by Glenn Brearley at 22:30 No comments: