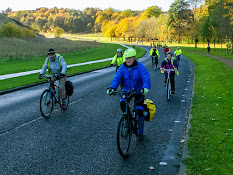 As a result of the Covid-induced lay-off, today's leader hadn't led a 20 Milers ride for two-and-a-half years. So an easy trouble-free ride to ease him back in would have been ideal. No chance! Today's ride to Inveresk had plenty of incidents to make it anything but dull. One rider was afflicted by two punctures, there were two pannier incidents and a medical emergency. Undoubtedly, the unseasonably mild weather helped, but a turnout of 27 riders was quite impressive for November. The day was reasonably mild, dry and sunny with hardly any wind - great cycling weather. At the customary briefing, the leader promised a ride to Inveresk with some familiar sections mixed in with some that would be new to almost everyone. 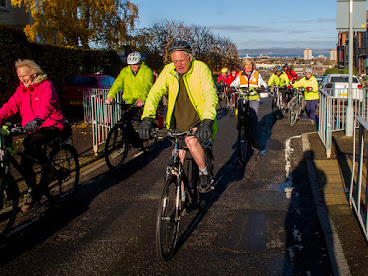 We left the Meadows and took the familiar route towards the Innocent Tunnel. But we swept past the tunnel entrance and into Holyrood Park. A glorious descent of Queens Drive, and we were soon leaving the park behind and heading through the quiet backstreets of Willowbrae. One of the many bumps in the area led to a rider having their pannier bounce off. A brief stop, the pannier was re-attached and they were rolling again. A short sharp climb of [the aptly named] Lilyhill Terrace soon had us nicely warmed up. A surprisingly easy crossing of Willowbrae Road and we were soon curving around Mountcastle Crescent. From there it was back onto Mountcastle Drive North, and we turned left at the lights towards Portobello along the segregated cycle lane. Somehow the whole group got through the next set of traffic lights before turning right into Stanley Street. The dreaded shout, "puncture" went up and the group came to a halt. Time ticked on, and despite a number of attempts using tyre levers, brute force and prayers the tyre could not be removed from the rim. Where was Alan Orr when we needed him? Recovering from injury is the answer. It looked as if the unfortunate rider's ride would end there. But no one is ever abandoned on our rides. They were directed to the bike shop in Portobello and the group continued past Portobello Golf Course. Over the bridge, through the backstreets of Joppa, along Milton Road and we were soon back on familiar territory. NCN 1 took us via Newcraighall to Musselburgh station where we joined the new cycle path to join the B6145. A few hundred yards and we turned right and headed down towards the Grove. From there we were soon at Craig House in Inveresk - our lunch stop. 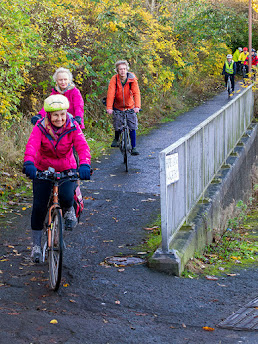 There was a pleasant surprise during our lunch stop. The rider with the puncture had it fixed at the bike shop in Portobello, and had managed to catch up with the group and continue the ride. We headed into Inveresk, turning left into Wedderburn Court. It was merely a loop round that returned us to the main road via Wedderburn Terrace, but it was one of those places that no one had been before and there were some very impressive houses there. Onwards through the village and down past Mussleburgh Grammar School. There was a loud clang and someone shouted, "stop!" It turned out that the bottom had fallen out of a rider's pannier and the clang had been their D-lock hitting the road. The belongings were gathered up, transferred to a backpack and we were on our way again. A cut through beside Tesco, along Mall Avenue, over the main road bridge through Musselburgh, a right turn at the Brunton Hall, a few more twists and turns and we were at Fisherrow Harbour. One final less familiar detour via Newhailes Avenue and Newhailes Crescent and we were heading for the bottom of Milton Road where we joined the Brunstane Burn path. We had just joined the path when a very loud shout of "stop" was heard. We all stopped and waited. Stretched out along the path, Chinese whispers spread along the line and the message suggested there was some sort of kerfuffle. After a while of wondering what sort of kerfuffle had occured, the backmarker rode to the front to brief the leader. It appeared that an elderly couple had been out walking and the man had taken ill. The backmarker had phoned for an ambulance and Iona and Barbara had agreed to leave the ride and wait for the ambulance to arrive. Having done all we could, the group prepared to move off. At that point the rider who had suffered a puncture in the morning, realised they had another in the same tyre. But with discretion being the better part of valour, they decided a walk to the nearest bike shop made more sense than trying again to remove the tyre. This time they headed back towards Musselburgh. The remainder of the group headed back towards town via the Brunstane Burn path, NCN 1 and the Innocent Railway. Without further drama, we arrived at the Meadows where the leader declared a rather eventful ride over.

The weather had been kind to us, most had seen new places, there had been a few dramas along the way; but most importantly of all, everyone appeared to have enjoyed the ride and we all got home safely. Special thanks to Iona, Barbara and Mike for helping with the medical emergency.

Posted by Glenn Brearley at 23:36 No comments:

We've got our November ride coming up on Saturday (13th). I hope you will be able to join us.

For this ride, Glenn has devised an interesting route through Portobello and Musselburgh. Even if you know that area fairly well, parts of Glenn's route may well be new to you. They certainly were to me when we did a recce last week.

The total distance will be just under 20 miles, mostly on good surfaces. There will be a few moderate hills, as well as one particularly steep climb near the start.

Our lunch stop will be at the Craig House Hotel in Whitecraig. Their menu includes a range of burgers and some other light snacks and also a vegetarian soup of the day. There is a spacious eating area, as well as some outside tables for those who like to brave the environment.

As always, we'll meet at the top of Middle Meadow Walk in time for a 10:30 departure. You don't need to let us know in advance that you are  planning to come: just turn up on the day. The ride should end before dark, but you are stongly advised to bring lights in case we are delayed and to light your way home (don't forget to check that the batteries have plenty of juice).

One other point: as with all our rides, the above route and lunch venue should be regarded as provisional. The meeting time and place are written in stone, but the other details might change according to conditions on the day and other factors.

Looking ahead, I'm pleased to announce that we will be resuming our popular Christmas morning rides this year, after last year's Covid-induced break. This will be a short, slow ride, taking advantage of the relatively light traffic in and around the city centre on that day. It will end at or near the Meadows, at 13:00 at the latest.  I'll post further details in due course. For now, just note the date (25 December).

Of course, the Christmas ride will be in addition to our normal "second Saturday" run in December, which will be on the 11th.