And Santa came too 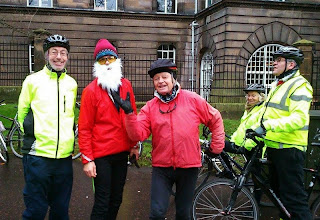 The 20 Milers annual Christmas Day short ride continues to go from strength to strength. No doubt helped by favourable weather and no sign of the forecasted frost; 25 riders turned up at the start. Michael arrived dressed as Santa which was a great hit with children and adults alike along the route. Usually we would have split into two groups. But as leader Mike was the only one that really knew the route (and because he was making some of it up as he went along) we remained as one group with a leader, mid-marker and back marker. We set off and made our first stop to admire the view from the Castle Esplanade which was crowded with tourists. We made our way round the back of the Usher Hall, across Lothian Road, behind the Sheraton Hotel and beside the canal to Leamington Bridge. 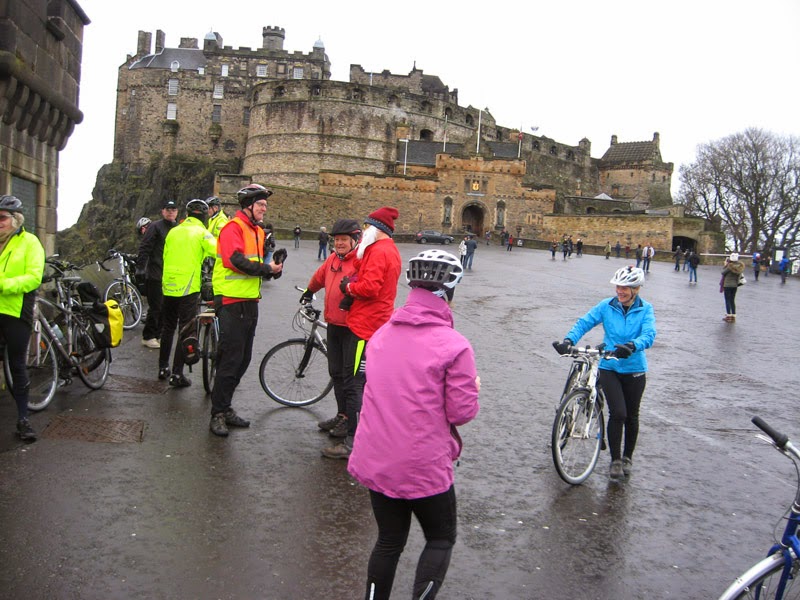 We meandered around quiet backstreets and paths to make our first of two visits to Dean Village. From there we made our way to Princes Street where we had an unfortunate "rider down" incident on the wet and slippery tram tracks. Our mid-marker picked himself up with fortunately nothing more than bumps and bruises. As he sits writing this report in the evening, he feels a bit sore but doesn't expect any lasting damage. Damned tram tracks!

We carried on and climbed up Calton Hill to be met by bright sunshine, glorious views over Edinburgh and throngs of tourists. This was also our refreshment stop. As is now the norm on these Christmas Day rides; many riders had brought cake, sweets, hot drinks, mince pies and mulled wine to sustain us for the remainder of the ride. 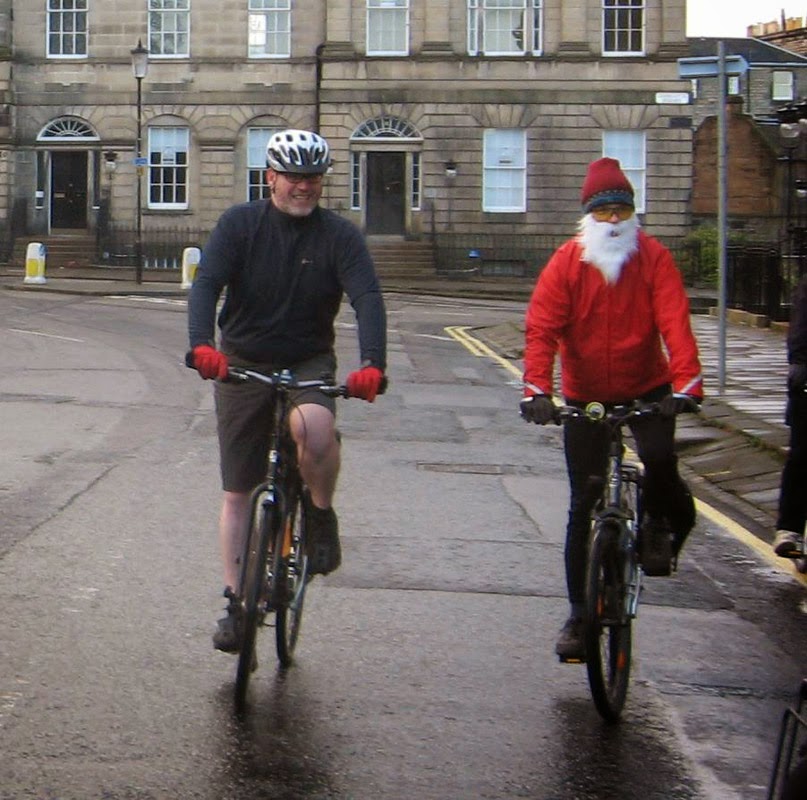 As we walked down the steps off Calton Hill the first riders began to head home. Others peeled off as they got close to home. With the numbers depleting we headed back to Stockbridge via McDonald Road, St Marks Park and Dean Village again.

Another successful Christmas Day ride came to an end with us all heading home. Thanks to Mike for leading an interesting and enjoyable ride. Thanks to those that kept us sustained with Christmas food and drink. It was good to see so many new faces; many of whom we hope will join us on our monthly rides next year. Was also good to see a number of regular CTC riders join us. 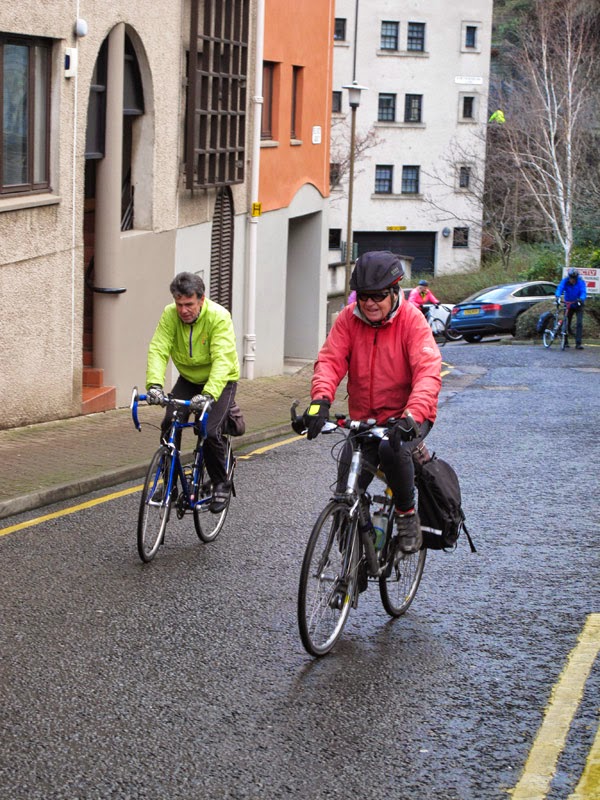 
We've got a ride planned for the morning of 25th December (Christmas day). This will be a short run, taken at our usual easy, sociable pace.

One of the nice things about Christmas day in Edinburgh is that the city is relatively free of traffic. We'll take advantage of that to visit parts of the city centre that we might prefer to avoid at other times.

We'll meet at our usual spot at the north end of Middle Meadow Walk, in time for a 10.30 start. The ride will finish no later than 13.00, in or near the West End. Note that there will be no café or lunch stop.

For those who can't make it on Thursday, our next normal monthly ride will be on 10th January.
Posted by Mike Lewis at 08:47 No comments: 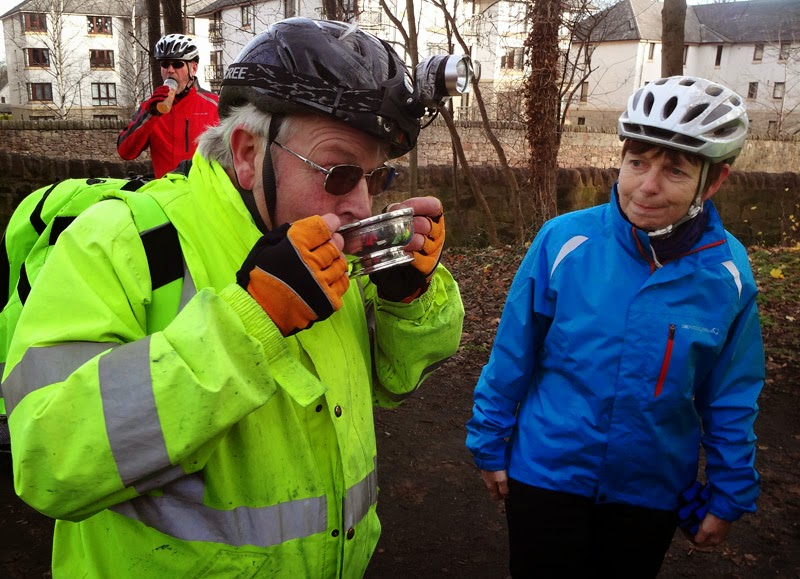 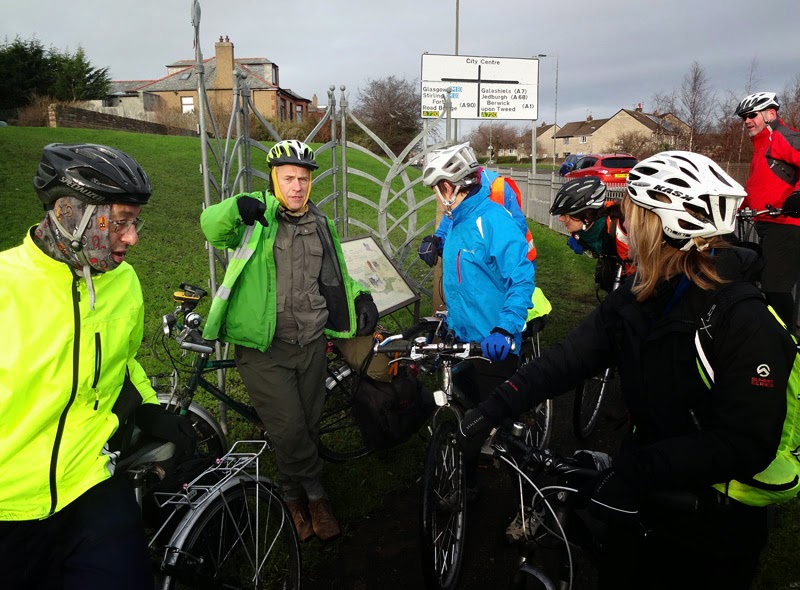 Posted by Glenn Brearley at 22:17 No comments:

For our usual monthly ride this coming Saturday (13th), Andy will be leading us on what looks like an interesting tour of bike paths in the south of the city. In deference to the short days, this ride will be slightly less than our usual 20 miles, and should present no difficulties. Our lunch stop will be at Mortonhall.

We'll meet, as always, at the north end of Middle Meadow Walk in time for a 10.30 departure. Keep in mind that it gets dark around 4 pm, so you'll almost certainly need to bring lights. The weather forecast looks cold and damp or snowy, so bring warm layers and a spare set of gloves. If the ground is icy then we may need to shorten or call off the ride.

Extra Bonus Christmas Day ride!
Our second outing this month will be our traditional Christmas morning run. This will be a short ride, mainly around the city centre, finishing no later than 1 pm. More details nearer the time.
Posted by Livia at 10:53 No comments: