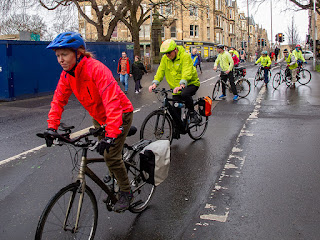 Just like last month, it was decided that today's ride would go ahead without a pub or café lunch stop. Instead, it would take the form of a half-day ride aiming to finish by 1300. The leader plotted a route of 13 miles to fit the format. But within that relatively short distance, we were promised some unfamiliar locations and ways of getting to them. The highlight of the ride was visiting a walled garden that few of the riders even knew existed.

The day dawned dry and quite windy, but nothing like as bad as earlier in the week. That was the way it remained for the duration of the ride, except for a couple of very brief light showers. A turnout of 17 riders was quite good for a windy February day following a rather unsettled week. It was great to see a smattering of new faces for a ride so early in the year. 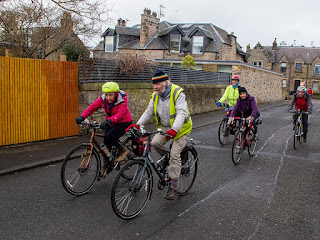 Following the customary route-details and safety briefing, we rolled away from Middle Meadow Walk and headed for the Leamington Bridge via the familiar route taking in Bruntsfield Links and Leamington Terrace. After a brief pause at the bridge, more familiar paths and roads took us onto the Roseburn Path at the zig-zags. At Craigleith we took the Blackhall Path and what seemed like the familiar route to Cramond Brig via Barnton. But a surprise left turn took us along East Barnton Avenue and through Davidsons Mains Park to emerge beside the busy-as-ever Queensferry Road. With everyone safely across, we headed through the quiet backstreets of Clermiston and cut across Clermiston Park. After a bit of climbing, we paused briefly outside St Andrew's Church before continuing. Soon we were on a cycle path alongside Clermiston Road. Crossing the road, we climbed a dirt track and we were at the delightful Corstorphine Hill Walled Garden. Most of us didn't even know this community garden existed. Leaning our bikes against the wall, we trooped in. There is something special about walled gardens, and this one certainly didn't disappoint - it was lovely. February may not have been the best time to visit, but it made many of us vow to return. In spring and summer it will be an absolute treat. Having explored the garden, we headed back down the dirt track to the road. From there, cycle paths weaved between the houses and quiet roads saw us arrive at the busy St John's Road. We crossed the road and left it behind as we rode along Corstorphine High Street and made our way through St Margaret's Park. More quiet roads and we were soon on the path that runs behind Silvan House on Corstorphine Road. The path took us to Balgreen Road, we crossed the Water of Leith and rode alongside it past Murrayfield Stadium and through Roseburn Park. From there we made our way to the zig-zags, before retracing our outbound route back to the Meadows where the leader declared the ride officially over.

For the old stagers of the group, it's very easy to think we've been everywhere. So it is great to be led somewhere completely new. All credit to Graham for doing that, especially in a shorter-than-usual ride, and to take us to somewhere so delightful.

Hopefully our March ride will return to the usual format to include a lunch stop and be around 20 miles in length. It would be nice if we could have some spring-like weather, but we'll have to wait and see.

Posted by Glenn Brearley at 22:18 No comments:

We've got our February ride coming up on Saturday (12th). Like last month's run, this will be a half-day ride, finishing by 13:00. But unlike last month, we won't try to squeeze a full-day's mileage into the morning. This time we will be doing just 13 miles. There will be a couple of stiff climbs around the middle of the morning, but no other difficulties of any kind.

For this ride, Graham has come up with what looks like an interesting and attractive route. We'll be heading out on NCN 1 as far as Davidson's Mains, then looping back round the western slopes of Corstorphine Hill before returning to town via Carrick Knowe and the Pinkhill railway path. The ride will include a short stop at the delightful walled garden on Corstorphine Hill (twice featured in BBC Scotland's The Beechgrove Garden).

As always, we will set out from the north end of Middle Meadow Walk at 10:30. And as always, the ride is free and open to all. There is no booking system and no need to let anyone know in advance that you are planning to come.

Keep in mind that with all our rides, the advertised route is subject to change, depending on conditions on the day. But the meeting time and place are always the same.

Why only half a day?

Since our January ride, Covid restrictions have been relaxed and the "three household" rule no longer applies. Despite that, we feel that it would still be unwise to take a large group into a pub or cafe for lunch. Nor is the idea of a February picnic likely to be popular. Hence the decision to finish the ride by lunch time.

All being well - and assuming no new Covid outbreak - we hope to return to our normal full-day format in March.

If you like the idea of a short, sociable ride, you might also consider joining EasyCycle's ride on Sunday 27 February. This will be a half-day run, leaving at 10:30 from in front of the Söderberg café in Middle Meadow Walk. As with our own rides, there is no advance booking, so just turn up on the day.

For those who prefer a more substantial outing, Spokes have a run on the first Sunday of every month, leaving from the Usher Hall in Lothian Road at 10:00. Spokes rides tend to be around 45 miles, finishing towards the end of the afternoon.

You can find further details of these and other local bike rides on my website: www.cycling-edinburgh.org.uk.

That's all for now. I hope to see you on Saturday, or whenever.