Today's ride was billed as an Edinburgh coast to coast. It saw us head to Cramond and follow the coast round as far as Portobello, before heading inland and back to the Meadows. We had another first for a 20 Milers ride today when a cargo bike turned up carrying a family of four. This explains how we managed to have 28 participants, but only 25 bikes. 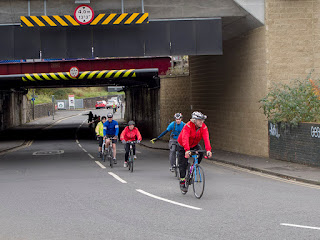 It was a good turnout for an October ride; no doubt helped by the unseasonably mild and sunny weather. Good to see a smattering of new faces in amongst the regulars. The leader gave the customary briefing. As expected, with the leader being Verity, we were told to act responsibly and be considerate to other road and path users, for our safety and theirs. Briefing over, we split into two groups and headed off towards Bruntsfield Links and the canal at Leamington Bridge. A short stretch beside the canal before turning off and heading down the Telfer subway. Despite a couple of sharp turns, the cargo bike negotiated this stretch without any problems. Onwards to join the Roseburn path at the zig-zags. This time there was a slight delay getting the cargo bike up. This resulted in the second group catching and passing the first at that stage. A strange moment when the two group back markers found themselves riding alongside eachother. The two groups had now merged into one. We then had a faller. A rider in the second group had skidded on wet leaves whilst avoiding a child. No injury or damage. But a search of the undergrowth ensued for missing cycle glasses. The glasses were eventually found. The delay meant that the first group took the front once again. We carried on to Craigleith, where we turned off on the path to Cramond. 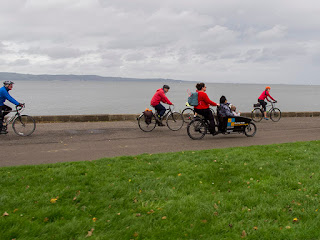 We made our way through Barnton arriving at the crossing on Whitehouse Road. Instead of heading down towards Cramond Brig, on this ocassion we turned right and headed up towards Cramond. A left turn saw us head down the steep School Brae, which took us to the River Almond. We stopped for a sweetie stop beside Cramond Island. Was it a coincidence that no sooner were the sweets opened than the second group arrived? A brisk run along Silverknowes Esplanade followed before joining the main road to Newhaven Harbour. We left the main road, passed the harbour and threaded through quiet streets to take the back entrance into Ocean terminal - our lunch stop. During the lunch stop, the writer realised the hazard of walking around a large shopping centre in hi-viz cycle clothing without a bike in sight. A member of the public came up to him to ask directions. His opening line being, "you look as if you work here." 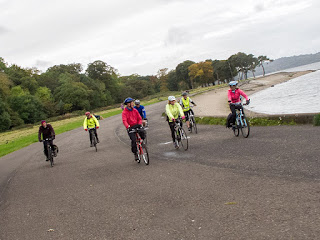 Lunch over, the two groups reconvened at the bike racks. We took the road past the docks and headed up Constitution Street, before turning left into Queen Charlotte Street, which took us to Leith Links. From there we headed back to the coast and on to Portobello Prom via Seafield. Over lunch, the leader had briefed the two backmarkers of the afternoon's route. She told us at Portobello Swim Centre, we were to turn left. Alas, she meant right. Turning left would have taken us into the Firth of Forth. Fortunately, we all turned right; so no wet wheels or riders! We made our way across the busy Abercorn Terrace and took the bridge over the Craigentinny railway sidings. The cycle paths serving the new Portobello High School took us to Milton Road. From there we threaded through the back streets of the Magdalenes to join the Innocent railway for our run back to the Meadows. Having been caught and passed by the second group earlier in the day, those in the first group were surprised at how far behind us they were at the finish. It turned out that there had been two punctures in the afternoon. Everyone seemed to have enjoyed the ride. Despite the earlier sunshine having been replaced with grey skies, the weather had stayed reasonable for the time of year. All in all, another successful 20 Milers outing. Thanks to Verity for leading.


Posted by Glenn Brearley at 23:14 No comments:


We've got our October ride this coming Saturday (14th).

Verity will be leading us on a tour of Edinburgh's north coast, heading out first to Cramond and then working our way round to Leith and Portobello. We'll be on quiet roads and well-surfaced paths for most of the time, with just a couple of stretches on roads that might be busy with traffic. The total distance will be about 23 miles, with no serious hills to worry about.

For lunch, we'll stop at the Ocean Terminal in Leith. There are several food outlets there, both to sit in or take away. For those of us who like to picnic, there is a particularly nice spot behind the building with good views of the harbour.

The meeting time and place for this ride are the same as ever: 10.30 at the north end of Middle Meadow Walk. Remember, all our rides are free and open to all, so feel free to bring your friends. There's no advance booking. Just turn up on the day.
Posted by Mike Lewis at 08:35 No comments: