For this ride, we'll be meeting at our alternative start point: the Sustrans marker at the three-way junction of the Roseburn, Blackhall and Telford paths in Craigleith (near the Sainsbury's petrol station in S. Groathill Avenue). We'll set out at 10.00 (half an hour earlier than usual) and aim to get back by around 16.00.

Keep in mind that these Extra rides are longer and faster than our usual runs. The total distance this time will be 30 - 35 miles. Most of the route will be on quiet roads or well-surfaced paths, but there might also be a couple of stretches on rough tracks.

For lunch, we'll aim for the Silver Sands beach at Aberdour. Bring food for a picnic, or pick up a sandwich at the beach café.
Meeting point here:
View Larger Map
Posted by Livia at 07:32 No comments: 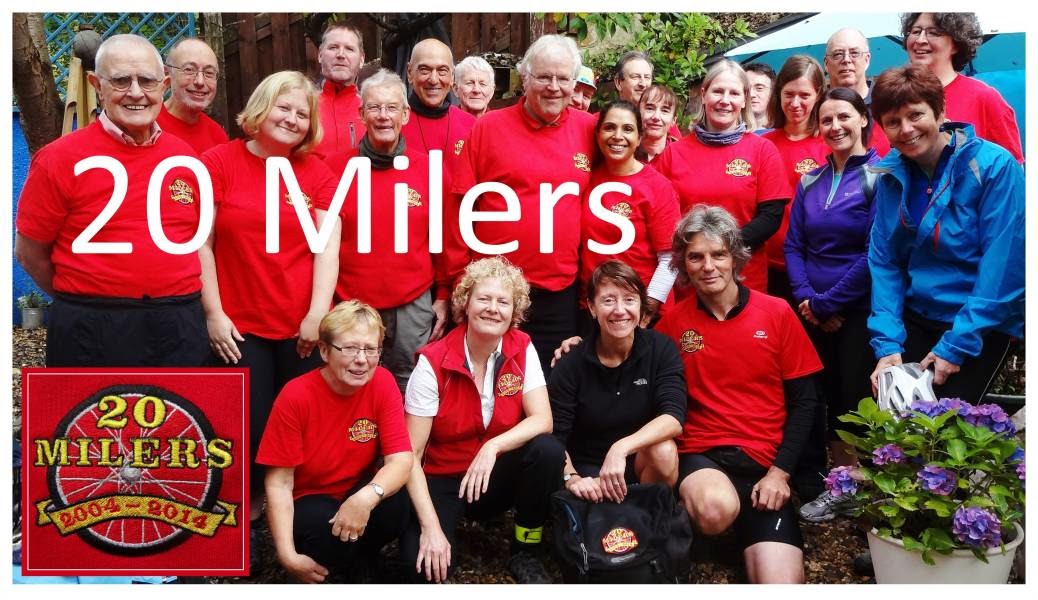 To celebrate our tenth birthday, many of our regular riders - including several who have been with us since our early days - met today for lunch at the Cramond Falls café.
Posted by Mike Lewis at 19:00 No comments:

September ride to the EICA 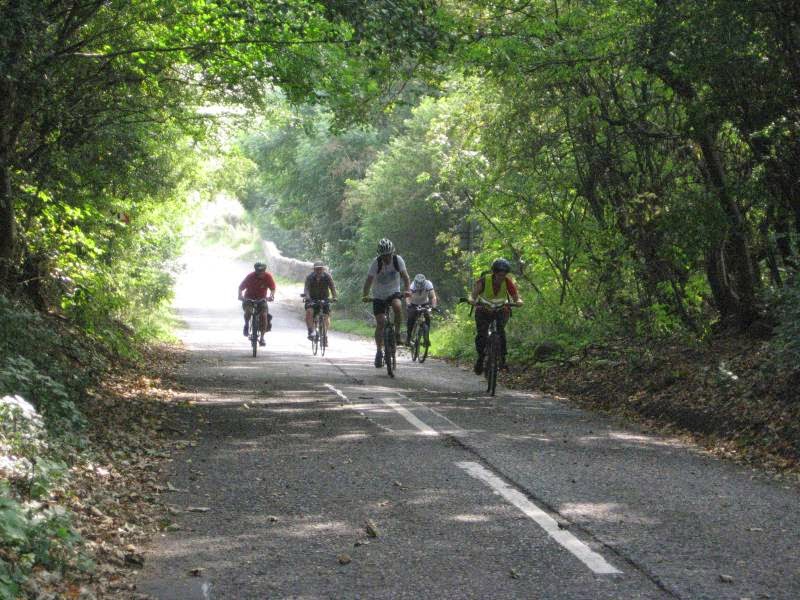 We've had some terrific weather for our rides this summer, and this one was no exception: a real T-shirt and shorts day. Not surprisingly, we had high turnout, with about 26 riders turning up at Middle Meadow Walk. Unfortunately, ten thousand or so other folk had a similar idea. Apparently, the Orange Order had chosen this same spot for the start of their big parade.

With the Meadows seething with humanity, we started discussing alternative routes for our departure. Then the police arrived and asked us to immediately vacate the little corner that we were occupying. We hastily split into two groups. Peter Bennet led the first contingent, who struck out along Lauriston Place, Lauriston Gardens and Bruntsfield Links. The second group, under the leadership of Alan Orr, was delayed slightly be a puncture, but then followed the same route.

Once clear of the Meadows, progress was much smoother. We headed down Whitehouse Loan, across Morningside Road, along Balcarres Street, and through the delightful Craiglockhart Wood. At Allan Park, we joined the canal towpath, which we followed for four miles to Hermiston House Road. This was followed by a few more miles on minor roads - including a few hills - around the edge of Ratho.

Our lunch stop was at the Edinburgh International Climbing Arena (EICA). This huge structure - the largest of its type in the world - was built on the site of a former quarry, with one of the faces being converted to a 25-metre climbing wall. The café area is about half way up the vertical elevation of the wall, and offers a dramatic view of the rock-climbers at work. 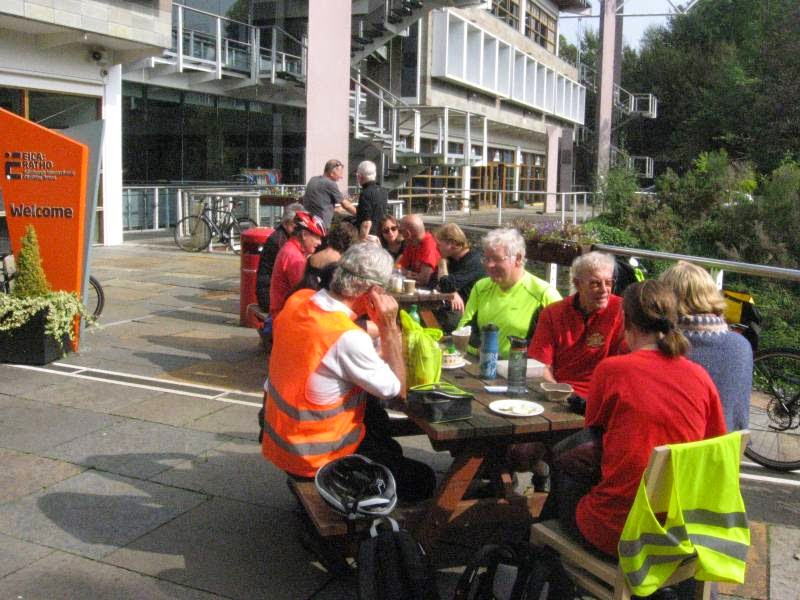 The café serves the usual selection of snacks and light meals, but the service can be painfully slow at times (when we did a recce for the ride last week, eight of us had to wait 20 minutes just to have our order taken). Forewarned, many of us had brought our own food today, which we ate at the picnic tables on the sunny terrace.

For the afternoon leg, we took the canal path back to Ratho, and then headed across the Ratho Park Golf Course. We always try to avoid disturbing the golfers when taking this route, which is in any case a right of way for walkers and cyclists. But not all the golfers are happy with that situation, and a couple of them decided to throw some verbal abuse our way rather than concentrating on their game. Well, it's not the first time that's happened, and it won't be the last.

The rest of the ride was uneventful. We continued through Gogar, Edinburgh Park, The Gyle, and Balgreen, finishing at Roseburn, where several of the group peeled off while the remainder headed back to the Meadows - now quiet again after the turmoil of the morning.

20-Milers on Pedal for Scotland 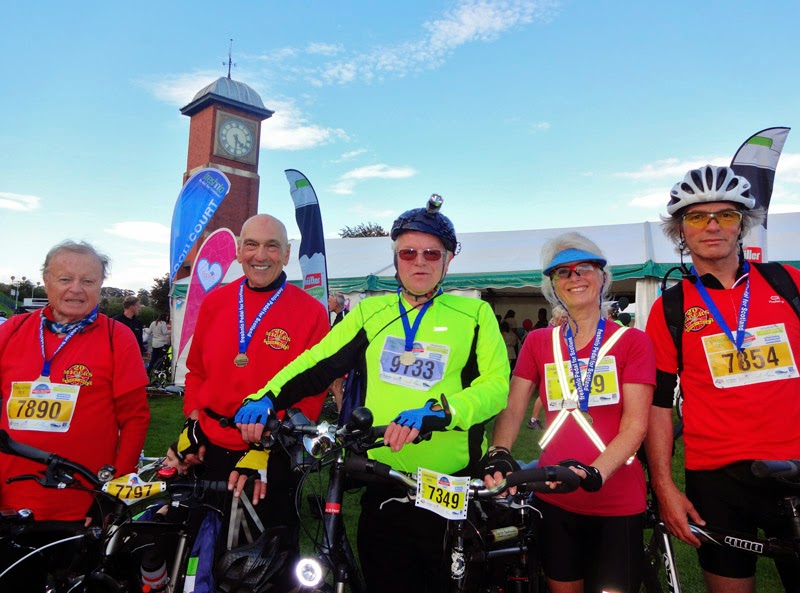 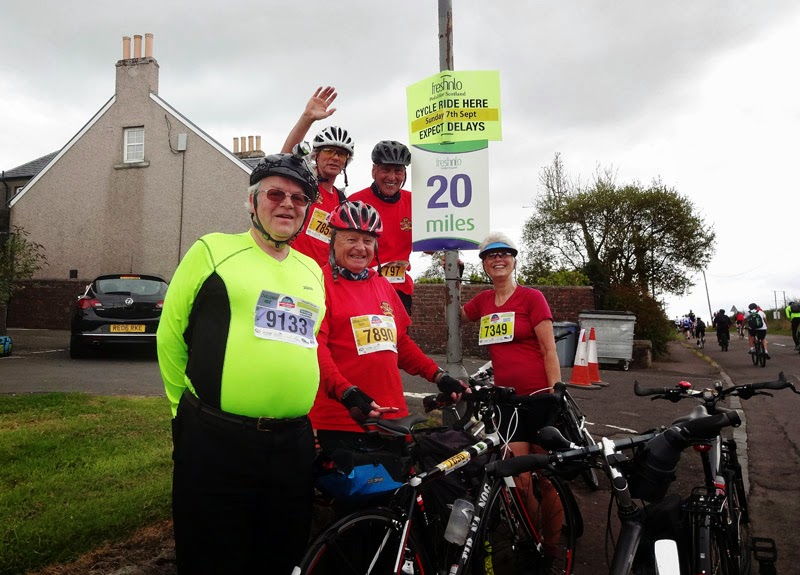 A small group of redoubtable 20 Milers, including one of our colonial cousins from down under, headed for Glasgow Green on Sunday morning for the start of the 2014 Pedal for Scotland 47 mile Challenge Ride.

The ride was largely blessed with excellent cycling weather with only a slight drop in temperature and a few spots of rain at the Avonbridge service area where the hot soup on offer was gratefully received and kit removed at the previous service stop hastily put back on again.

The route was well marked with plenty of marshals stationed along the way to guide us through the tricky bits, and police stationed at busy junctions and roundabouts to hold back the traffic and provide us with free passage. All this and a following wind made for a hugely enjoyable ride, with some stunning scenery and cyclists of all ages readily joining in the fun.
At Linlithgow Palace we were treated royally to stacks of food that included soup and packs of sandwiches, pasta salads and an unlimited supply of Tunnocks Caramel Wafers, many of which found their way into our backpacks, back pockets and cycle panniers.

So well fed were we that the group decided to bypass the final service stop at Kirkliston to continue on down to Crammond Brig and hence along familiar cycle paths to Roseburn, and eventually to Murryfield Stadium, where we arrived at the finish line shortly before 4.30pm. Having left the starting point a little after 10am, that made a journey time of just over 6 hours with stops, not a bad time considering, and a tremendous day's cycling.

Our next ride is this coming Saturday (13th) - a little longer than normal at 26 miles, but without any particular challenges. Mainly on roads or surfaced paths, reasonably flat with just some moderate hills in the morning.

Lunch stop at the Ratho climbing centre - there is a nice cafe but queues can be long so bring your own picnic if you prefer. Excellent views of the largest indoor climbing wall in the world.

PS note that EasyCycle rides are now on Sundays - next ride 28th September from Peter's Yard on Middle Meadow Walk
PPS our final 2014 "Extra" (longer) 20milers ride is on Saturday 4th October - heading across the bridge to Aberdour.
Posted by Livia at 22:38 No comments: