.
We've got one of our Extra ride this coming Sunday (3rd August). As you know, these rides are longer than our usual runs: this one will be about 32 miles. We start earlier, finish later, and go at a slightly faster pace. If you find our normal "second Saturday" rides well within your capabilities, you should have no difficulties with this one. But those who sometimes find it hard to keep up on our normal rides might prefer to give this one a miss.

For this ride, Glenn will be leading us to the Gosford Estate, which is just this side of Aberlady.

Be warned that the route will involve several stretches on main roads which might be busy with traffic. But there will also be some nice quiet stretches along the East Lothian coast. We'll be riding on firm surfaces for much of the time, apart from a couple of miles on slightly rough paths. The route is not particularly hilly.

For lunch, you can bring a picnic, or get a bowl of soup or a sandwich from the café

The ride will start at 10.00, from in front of the Scottish Parliament in Holyrood. We'll meet by the bike racks, which are just by the entrance to the Parliament, behind the bus stop.

The ride will probably end around 16.00 - 16.30. But don't hold me to that. The finish time will depend on the turnout, the weather, and general progress. 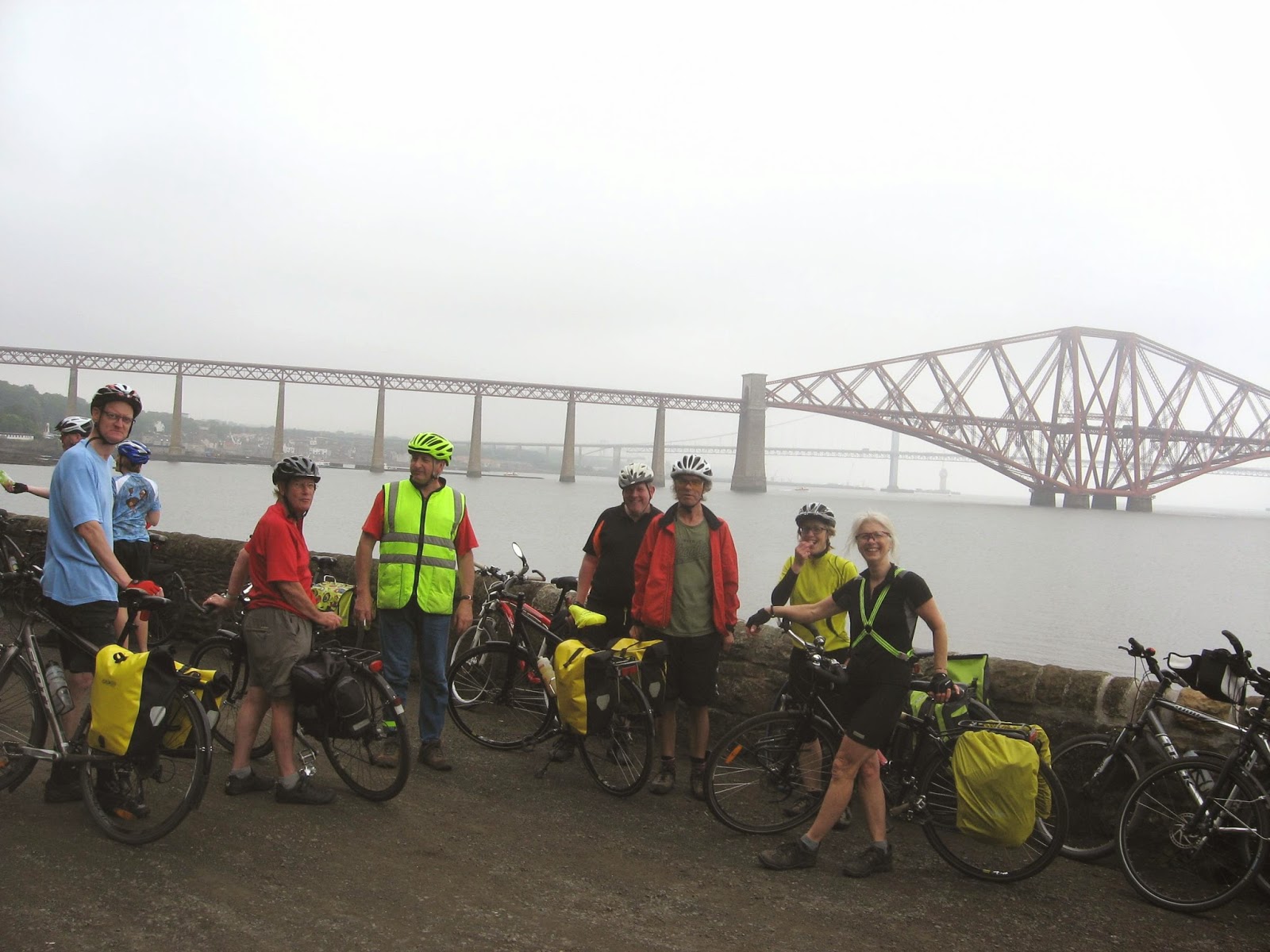 On a warm but murky Saturday morning, fourteen of us met at the Roseburn marker for the first ever 20-Milers weekend away. Six us of planned to stay overnight in Stirling, whilst the remaining eight intended to accompany us for part or all of the way and return to Edinburgh by train.

We made our way to the Forth Road Bridge by a route used many times before. Once over the bridge, Ken and Logan peeled off to check a pub in North Queensferry for a lunch stop on a future ride (at least that's what they told us). The rest of us headed onto the less familiar NCN Route 76 through Limekilns and Crombie. A puncture split the group. Persistent rain and low cloud spoiled the views as we hugged the coast. A lunch stop in Culross was a welcome respite from the rain and allowed us to regroup.

After a good lunch we pushed on through Kincardine where a further puncture split the group again. The back group struggled to find their way out of Alloa before eventually making it to Stirling. Here there was a parting of the ways as six headed to the hotel for a welcome shower whilst the remainder made for the station and the train. A pleasant evening was spent in Stirling where we enjoyed an Italian meal and some liquid refreshment.

Following a good night's sleep and a hearty breakfast, the group of six set off in glorious sunshine for the Kelpies. Following further adventures, including split groups and route-finding troubles, we eventually met up with three riders who had travelled by train from Edinburgh. 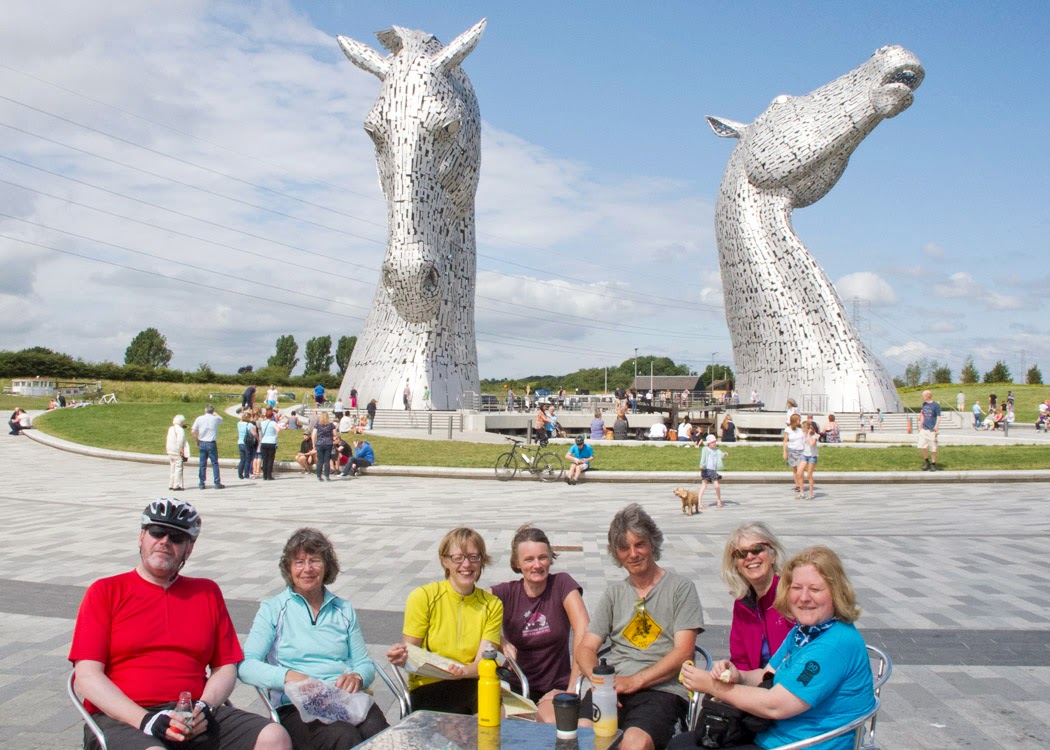 Visiting the Kelpies had to be the highlight of the trip. They were absolutely amazing (see photo, right). We then set off for home past the Grangemouth petro-chemical works. A brief stop to buy food in Bo'ness and then off to Blackness Castle for a late picnic lunch. A familiar route through the Hopetoun estate, South Queensferry, Dalmeny estate, Cramond and Barnton saw us return to our starting point at the Roseburn marker.

Those that did the whole route clocked up about 85 miles over the two days. It must have been a successful trip as on parting, someone asked, "where are we going for our night away ride next year?"

Email ThisBlogThis!Share to TwitterShare to FacebookShare to Pinterest
Labels: Kelpies, Round the Forth, Stirling, weekend ride

July ride to the Harlaw Reservoir 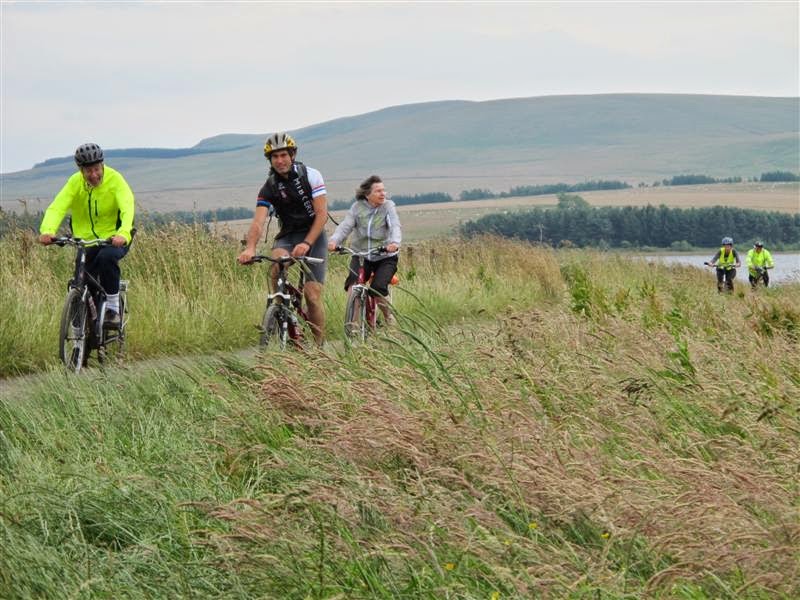 After several hot and sunny days, this morning was cooler and more overcast - but still good weather for cycling. Around 30 of us turned up for a ride to the edge of the Pentland Hills. I led the first group, with Ken in charge of the second.

Our route took  us over Bruntsfield Links, and then to Whitehouse Loan, Hermitage Drive, Braidburn Valley Park, the Braid Burn path, and Redford Road. At Colinton, we had a brief comfort stop before continuing along Woodhall Road. This part of town has a distinctly suburban feel to it, but once we passed the City Bypass, we were in open countryside, with fields on both sides of the road, and good views all round.

Inevitably, given that we were heading for the Pentland Hills, we had some climbing to do. Most of this was concentrated on the Curry Kirkgate, a grindingly steep half mile of ascent that climbs from Blinkbonny to Harlaw Road. We all made it to the top without mishap - albeit with various degrees of exhaustion.

A mile or so later, we arrived at our planned lunch stop: the picnic tables by the Harlaw Reservoir. Here, there was a moment of slight embarrassment for yours truly. I had assiduously warned the group that there would be no café or pub anywhere near the reservoir, and that they must bring their own food or face starvation. What I didn't know was that some enterprising person recently set up a caravan, right outside the ranger station, from which they were serving hot drinks, sandwiches, soup, cakes and a tempting selection of crêpes: in short, everything you need for a decent lunch. I'm sorry I didn't know about this earlier - although several of our party were quite happy to buy a meal from the caravan and eat the sandwiches they had brought with them.

After lunch, we did a circuit of the Harlaw and Threipmure Reservoirs. And then it was downhill almost all the way home. We had an exhilarating freewheel down to Balerno, followed by a fairly fast run on the Water of Leith path to the point where it crosses the canal.

At this point, the two groups were re-united. Some riders then chose to continue along the Water of Leith to Roseburn. Others made a bee-line back to town along the towpath. For most of us, the timing was impeccable: we got home shortly before the arrival of a heavy burst of rain which lasted well into the evening.

Next Saturday's ride: A Harlaw picnic 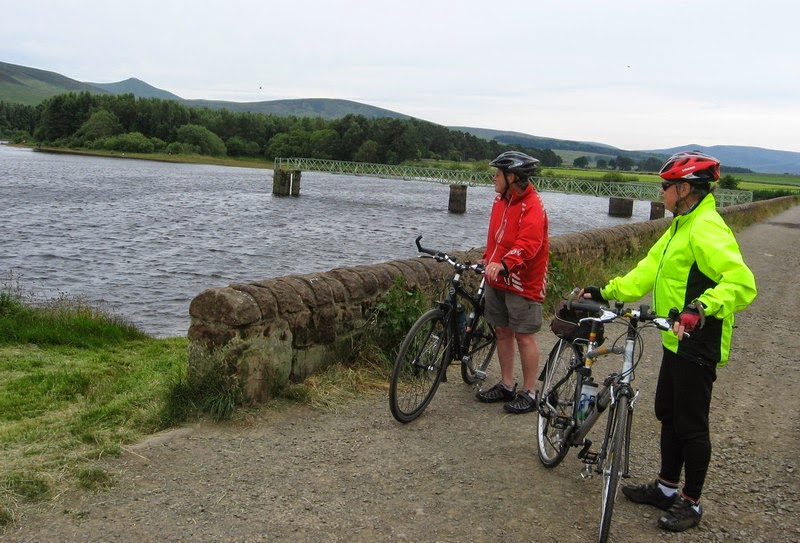 Our next ride is this coming Saturday (12th July). We'll be taking a particularly scenic route: heading out to Colinton, and then climbing to the edge of the Pentland Hills. Our lunch stop will be a picnic at the Harlaw Reservoir.

Inevitably there'll be some hills, including a particularly steep one just before lunch. But we'll take them at our usual steady pace, and give stragglers plenty of time to catch up. And, as a reward, we'll have some nice long freewheels in the afternoon. The total distance will be 21 miles. Most of the route will be on quiet roads and firm paths, but there will be about two miles on rough tracks.

As always we'll meet at the top of Middle Meadow Walk in time for a 10.30 departure. The ride will finish mid afternoon.

Remember, the lunch stop on this ride will be a picnic. There will be no pub or café at the lunch stop, so if you don't want to go hungry, be sure to bring food. Depending on numbers and progress, we might stop for a coffee near the end of the run.

There is a toilet at the picnic place, but this sometimes attracts long queues, so we'll have an additional comfort stop about 45 minutes before lunch.

What if the weather's bad?

A light drizzle or a short shower won't put us off. But if the weather is really foul, we'll switch to Plan B: a shorter ride, with a café or pub lunch in Colinton. If the weather is borderline, we'll make a decision at the start point. There are several sandwich outlets at the Meadows, so if you're not sure whether to bring food, plan to arrive early so that you can pick up something if necessary.
Posted by Mike Lewis at 08:52 No comments: