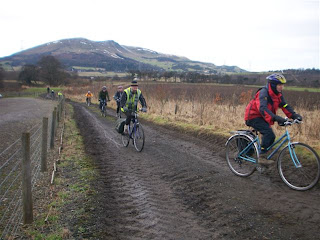 We were warned that there would be mud, and mud there was. From Mortonhall to Niddrie, there was about four miles of the stuff. Fortunately, we coped with it well, and there were no mishaps. It certainly added interest to what was already an excellent ride.

Under the leadership of Andy Hunter (of Storybikes fame), 33 of us set off from the Meadows, heading south via Lovers Loan and the Astley Ainslie, and quickly reaching the heights Braid Road and Mortonhall. We were a little early for lunch, so Andy took us on a scenic detour by way of Buckstone and Mounthooly, from where there were fine views of the Moorfoots and the Pentlands (see picture). The paths were already churned up; an additional 33 pairs of wheels did nothing to improve them.

After lunch (split between the Stables Bar and the cafe in the garden centre), we headed east and north. We followed the Burdiehouse Burn (more mud) by way of Ellens Glen and Gilmerton, then along a particularly mucky path behind the Infirmary. On reaching Bingham, we turned west, heading back to town by the Innocent Railway.

Despite the conditions, it was another successful 20-Milers ride. The day was mild with almost no wind, and, as a bonus, we were treated to a couple of Andy's famous stories. The total distance was 17 miles.

I'm off now to clean my bike.


View Feb10 Storybike in a larger map
Posted by Admin at 09:59 No comments: