Announcing our next cycling weekend


This year's 20-Milers cycling weekend is now fixed for 21 -22 May. Our destination will be Dunbar.

There will be 35 - 40 miles of cycling each day. We'll leave Edinburgh on the Saturday morning, taking an inland route via Pencaitland, Gifford and Garvald. On the Sunday, we'll return by way of North Berwick and the coast. You can expect a few hills on both days, but none of them as severe as those on our Peebles weekend last year. The pace will be similar to our normal monthly rides.

There are several hotels, B&Bs and guest houses in Dunbar, with a range of prices. You will be responsible for booking your own accommodation, but we will all meet up for a meal on the Saturday evening.

If you are interested in joining this ride, please let Glenn know. This doesn't commit you to anything. It's just to give us an idea of numbers, and also so that we can keep you informed of any changes in plan.

A canal, a river bank, a university and a shopping centre 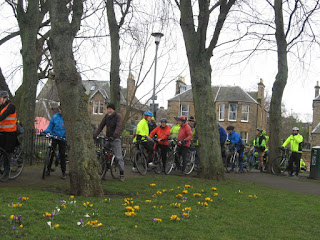 Unlike our two previous rides, today's run proceeded according to plan. It was an overcast morning with a fresh breeze, but it was free of the hazardous ice that stymied our January and February outings.

Twenty-four of us – including several newcomers (welcome) - set off under the leadership of Michael Law. We ambled down Middle Meadow Walk, across Bruntsfield Links, and onto the canal at the Leamington bridge. Continuing the gentle pace, we left the canal at Harrison Park, then headed to Russell Road and Roseburn Park. Then came a couple of miles along the river bank towards Slateford. Somewhere on that stretch one of the riders had a puncture; a few of the group stayed to help him fix it, with the whole party re-assembling a short while later at the Water of Leith Visitor Centre.

After leaving the river in Currie, we crossed the Lanark Road, and took a series of back roads to the west gate of Heriot-Watt University, which was our planned lunch stop.

The cafeteria at the university is an ideal venue for a 20-Milers lunch. The staff are used to dealing with large numbers of hungry students and conference delegates, and were not at all put out by the sudden arrival of two dozen cyclists. And given that this was a Saturday and therefore relatively quiet, there was plenty of room for us to spread out.

Lunch finished, we left the campus by Gogar Station Road, and weaved through to Edinburgh Park. With most of the office buildings empty for the weekend, this area was looking particularly bleak, but at least we had the roads and paths to ourselves. By contrast, the Gyle Centre was teaming with Saturday shoppers. 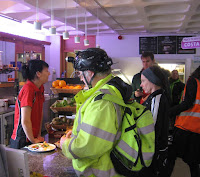 The final leg took us past South Gyle Station and the Carrick Knowe golf course, then onto the Corstorphine railway path and so back to Roseburn and the Meadows. At just a smidgen more than 20 miles, it was another very successful ride.

(A special word of thanks to Neil Miller, who volunteered to stay with one of the group who was afflicted by a debilitating migraine, then helped her find her way home.)


For this month's ride (this coming Saturday), Michael Law will be leading us on a tour of bike paths in the south west of the city, heading out to the Juniper Green / Currie area. Our lunch stop will be the Heriot-Watt campus in Riccarton. This has an extensive cafeteria where you can get hot snacks and sandwiches. There's also a nice picnic spot there, overlooking the loch.

The meeting place and time are the same as always: 10.30, at the north end of Middle Meadow Walk.

The dark afternoons are now receding, so you won't need to bring lights for this ride (unless the weather is bad and visibility poor). But do give your bike a check-over to make sure it's road-worthy. And please bring a spare inner tube if at all possible.

There's no need to book a place on our rides. Just turn up at the appointed time.
Posted by Mike Lewis at 08:45 No comments: