A chilly, damp ride - and a change of plan

Today started very cold, with the temperature around zero and with icy patches on the roads. We had planned to go to Musselburgh, but a communiqué from our agent in that town told us that the paths there were particularly treacherous. After a hasty re-think we opted for a shorter ride within Edinburgh.

Under Alan Orr's leadership, 19 of us set out, cautiously pedalling through Polwarth and Dalry, and then to Ardmillan Terrace and Russell Road. We zig-zagged up to the Roseburn Path, and then headed north west on the familiar NCN 1. By the time we reached Cramond Brig, the thermometer had soared to 3C, and most of the ice had disappeared. So we pressed on, reaching Craigies Farm about 20 minutes later. The café at Craigies has been enlarged since our previous visit, so we had no difficulty finding tables for an early lunch. 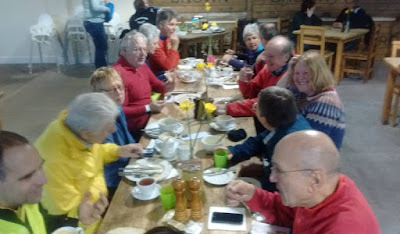 As we were finishing our soup and sandwiches, the rain started, so we headed straight back to town, arriving at Craigleith just before 2 pm. At that point, our leader declared the ride over.

Thanks to Alan for coming up with this route at short notice. As it happens, it was similar to the route we were planning for February. So we'll probably revert to Musselburgh next time - weather permitting, of course.


We'll be having our first ride of 2016 this coming Saturday (9th). Glenn will be leading us on a tour of some of the lesser-known parts of Musselburgh, with a pub lunch in Whitecraig. It looks like an interesting route, with only a few moderate hills. But be prepared for one or two muddy paths, as well as a short stretch on a busy main road. The total distance will be 21 miles.

Our meeting time and place is the same as ever: 10.30, at the north end of Middle Meadow Walk. The ride is planned to end at the Meadows well before dark, but you should bring lights anyway in case we get delayed.
Posted by Mike Lewis at 10:22 No comments: