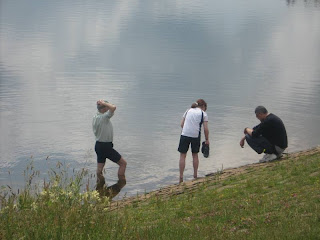 On most of our rides, we stop at lunchtime for a hot snack or light meal to see us through the day. Today, just for a change, we skipped the cafés and pubs, and opted for a picnic instead. It turned out to be an ideal day for it: clear skies, only a slight breeze, and temperatures reaching the mid twenties.

With such good weather, it was no surprise to see another high turnout. Over 30 of us set out from the Meadows. But by the time we got to the bottom of Whitehouse Loan, the ride was already well strung out. So we decided to split ourselves into two groups. I led a slightly faster party, with David (Gilchrist) acting as backstop. Ken and Logan looked after the slightly slower group.

Our destination was the Harlaw Reservoir. Given that this is on the edge of the Pentland Hills, and is at an altitude of 850 ft (compared to 260 ft for the Meadows), it was inevitable that we would have to do some climbing. This started almost straight away, with an ascent of Braid Avenue to Hermitage Drive.

Then came an easier stretch through Braidburn Valley Park and on the path running alongside the Braid Burn and through Colinton Mains Park. But this was followed by another slog, this time up the steep path to the NAAFI in Redford Road. (It's funny how we still refer to this point as the NAAFI, even though that establishment closed several years ago, with no trace of the former buildings remaining.)

After a nice downhill run into Colinton (and a stop at the convenient new conveniences), we headed up Woodhall Road and Blinkbonny Road, and then started on the real work of the day: the climb up Curry Kirkgate. In fact, this wasn't quite as bad as some of us had feared. I can't speak for the slower party, but nearly all of my group reached the top - albeit quite slowly - without having to get off and push. The first riders in the second group came into sight just as we had got our breath back and were setting off on the last leg to Harlaw 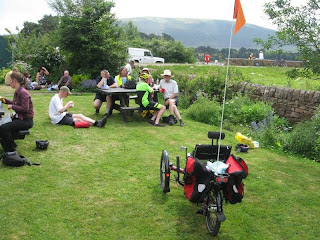 The two groups joined up at the reservoir. This proved to be an excellent place for a picnic. We spread ourselves between the reservoir wall and the various tables and benches in the delightful garden behind the rangers' station. After lunch, some of us set out for an extra circuit of the reservoir. Others passed the time by paddling in the water, trying a recumbent trike belonging to one of the group, and queuing for the only loo.

On leaving the picnic spot, we immediately reaped the reward for the hard work of the morning, with a lovely long freewheel into Balerno. We then made good time along the Water of Leith path, eventually reaching the Lanark Road bridge and the canal. At this point, about a third of the group chose to go straight back to town along the towpath. The rest of us headed for the Water of Leith Visitor Centre, where we took a lazy afternoon tea on the sunny terrace before drifting off on our separate ways.

Leader: Mike, with help from David, Ken and Logan
Report and photos: Mike

Saturday's ride (13th) is the normal 20-miles, however this month we hope to eat al fresco at a picnic spot by Harlaw Rangers' station - no cafe. If the weather is wet then we will find an alternative venue with shelter, but be prepared to either bring your own sandwich etc. or to buy something at the start point and carry it.

If the weather is as warm as it has been this week, a large bottle of water is highly recommended for the day, plus please bring a spare inner tube in case of punctures.

There will be a certain amount of UP on this ride (we are going to the Pentlands, after all) but the normal gentle 20miler pace will be maintained.

You can keep an eye on the weather forecast here.
Posted by Livia at 23:51 No comments: 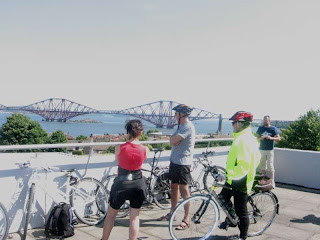