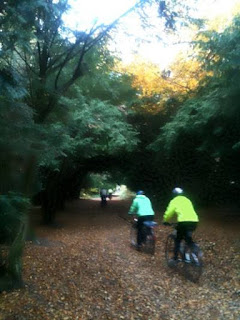 For our November ride, Chris Pearson led a group of 20 riders on a fascinating route through the east and south of the city.

In bright sunshine, we left the Meadows via George Square and the Pleasance, then headed through Holyrood Park to Duddingston Village. We then proceeded along Cavalry Park Drive to Duddingston House (built in the 1760s for the Earl of Abercorn, and now housing offices and a conference centre). We continued through the quiet streets of Bingham (passing St Mary Magdalene, which Chris describes as "possibly the ugliest church in Britain"), and then along a short stretch of the Innocent Path.

Just before Asda, we took a new section of path that goes to Fort Kinnaird, and then on to Whitehill Road. We continued through Shawfair, Hilltown, Millerhill Road and Danderhall. At the padlocked gate leading into the Drum Estate, Chris surprised us by apparently using his key to enter the grounds (it was actually a bit of sleight of hand involving what looks like the door to a private house but which actually leads to a public path).

After passing Drum House (a Palladian mansion built by William Adam around 1730), we continued through Gilmerton and along Lasswade Road to the entrance to Burdiehouse Valley Park, and then across Captain's Road and into Gracemount. After crossing Howden Hall Road, we reached Mortonhall.

For lunch, we divided ourselves between the Mortonhall Stable Bar and the café in the nearby garden centre. In the bar, the server asked (politely) for payment in advance, hinting at previous difficulties with cyclists leaving without paying - no further details forthcoming.

After lunch, we took a muddy but picturesque woodland path towards Braid Road, struggling a bit up a section with loose gravel. We crossed Comiston Road into Pentland View, and then on to Braidburn Valley Park.

At this point, the first drops of rain were falling, so we hastily continued on the final section of the route, via Canaan Lane, the Astley Ainslie grounds and Whitehouse Loan, with people peeling off at various points along the way. It was another excellent ride - and, as a bonus, was completely puncture-free.

Route for Saturday 10th November's ride
Chris Pearson will be leading the group on a route that covers quiet roads, little-known paths and seldom-visited villages on the south-eastern edges of the city. There are also two historic houses along the way. Lunch will be at Mortonhall. We'll probably return via the Braidburn Valley path.
Chris warns that there may be some short muddy sections. And, he adds, "the steep climbs will be short and the long hills will be gentle".
At the lunch stop, you can choose either a snack in the Stable Bar, or the café in the garden centre, which offers a good range of sandwiches, salads, soups, baked potatoes and the like. The courtyard of the Stable Bar is a good choice for those who like to bring their own food.
Lights
Although we fully intend to be finished by dusk, there are always the possibility of delays, so we recommend that you bring bike lights on the ride over the wintery months.
Posted by Livia at 21:18 1 comment: