"Why did it have to rain on my parade?" 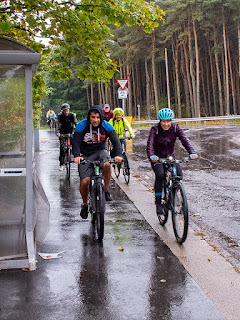 Having established herself as an integral member of the 20 Milers, today Yaz stepped up to lead her first ride. Her question, "why did it have to rain on my parade?" summed up the weather. It was dry when we started, but within minutes the rain began to fall. It was certainly heavier than the forecasted "light showers". Fortunately, the rain had almost stopped as we arrived in South Queensferry for lunch. The afternoon was just about dry, but we were all back home long before the sun made its first appearance of the day. The 21 riders that arrived at the start made this our highest turn out since our rides recommenced in August. It was a bit of a surprise, especially considering a far from promising weather forecast. Following an impressive maiden leader's speech from Yaz, we rolled away from the Meadows to Leamington Bridge via Toll Cross. Just beyond the bridge, we paused briefly whilst waterproofs were donned. In rain that was heavy enough to be unpleasant, we followed the well worn route to Dalry Road via Fountain Park and the Telfer Subway. Negotiating the roadworks and one way system at Murieston involved a short walk along the pavement. Back on the bikes, we climbed the zig-zags to join the Roseburn Path to Craigleith. The rain wasn't getting any heavier, but neither did it show any sign of easing. We took the Blackhall Path and made our way through Barnton to Cramond Brig. 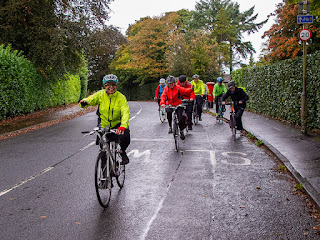 The leader held a brief conference with a couple of experienced leaders, and concluded that given the under-wheel conditions, it made sense to abandon the planned route through the Dalmeny Estate. It was an unfortunate, but necessary choice given the conditions. It would have been quite treacherous in places. After informing the group of the change, we headed off following the path alongside the A90 instead. As we headed towards the Chapel Gate entrance to the Dalmeny Estate, a rider fell. Fortunately, it happened at low speed and caused no damage or injury. They picked them self up, brushed themselves down and we were rolling again. Through Dalmeny village and along the path that emerged beside the Co-op and we were in South Queensferry. As we'd arrived at the opposite end of town due to the change of route, we had to make our way through the one way system to Hawes Pier for our lunch stop. Those that got themselves sorted quickly made it to the pub. Those that weren't so quick arrived to find there was no room left, and ended up eating alfresco on the sea front alongside the picnickers. It had just about stopped raining, but there was nowhere to shelter and riders were still wet from the earlier rain. As a result, several riders opted to abandon the ride and head home. 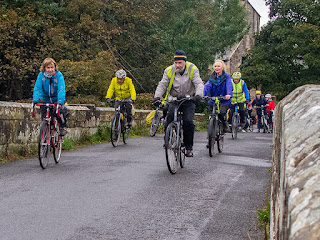 We regrouped after lunch, and with a depleted field, made our way back through town. It's great that the road is one way for motor vehicles [whilst being two way for cycles], but the narrow roads and concern that drivers don't realise this to be the case was a slight worry. The rain had stopped. Although it hadn't got any warmer and the sun hadn't appeared, wet gloves etc. were beginning to dry. Up the steep little hill to the Co-op and we were back on the path to Dalmeny village. Back alongside the A90 and we were soon taking a longer pause at Cramond Brig. As the group got moving again, a couple of riders were dawdling until the backmarker uttered the words, "come on. My tea's getting cold!" At the cycle and footpath link between Barnton Avenue West and Barnton Avenue we were held up by a car exiting the drive of one of the houses. Obviously they have every right to exit their drive (and did allow us to squeeze past); but meeting a car there was a big surprise, even to those that have used that path numerous times. From there we retraced the outward route from the morning. The closer we got to town, the more riders peeled off and headed home. Six of us made it back to the Meadows where the leader announced the ride officially over and heaved a sigh of relief.

Thanks to Yaz for doing such a good job of leading her first ride. The weather did her no favours, but deciding to scrap the route through the Dalmeny Estate was definitely right. Everyone seemed to enjoy the ride, despite the weather and thanked the leader. Thanks to Alan for back marking. A final word from the writer; Ken will be, and Logan would have been so proud of you. Well done!

Posted by Glenn Brearley at 23:35 No comments:

We've got our next ride coming up on Saturday (9 October). I hope you will be able to join us.

For this ride, Yaz will be charge. She will be leading us on a scenic circuit via Cramond Brig and the Dalmeny Estate, returning by way of Dalmeny Village and NCN 1. The total distance will be about 22 miles. Most of the route will be on quiet roads and well-surfaced paths, but there will also be a couple of rough paths, as well as two places where we will need to dismount and push because of road works. There will be just a few hills, none of them particularly difficult.

Our lunch stop will be in the shadow of the Forth Bridge, at Hawes. There are two sit-in restaurants there (the Hawes Inn and the Three Bridges), but because of Covid, they are both operating with restricted access. When we went there for a recce recently, people were queuing up to go in. To avoid a long wait, please consider bringing a packed lunch instead.

There is also a snack bar which does take-away sandwiches and hot drinks. There are seats overlooking the Forth where you can eat your lunch, and public toilets nearby.

We will meet at our usual spot at the north end of Middle Meadow Walk, in time for a 10:30 departure. We will aim to be back at the Meadows around mid-afternoon. The ride is free, of course, and you are welcome to bring your friends. We don't operate a booking system, so just turn up on the day.