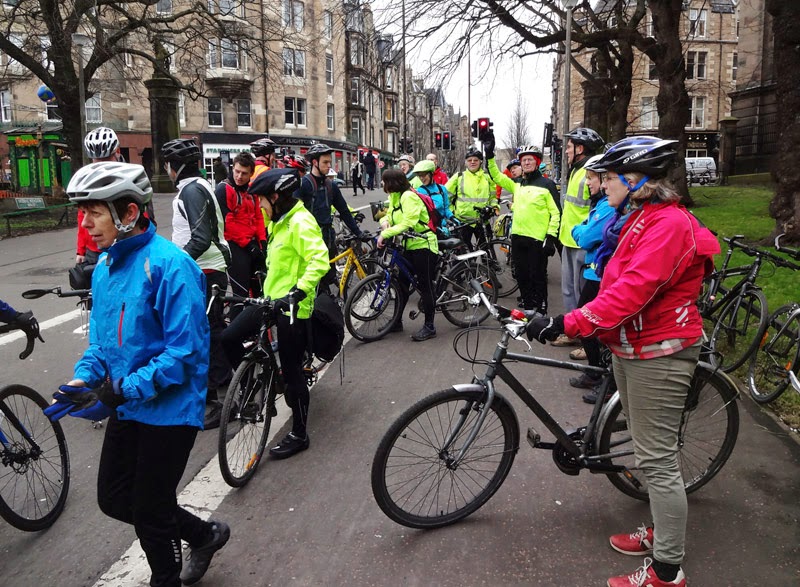 Who would have thought that a dry but chilly and overcast March day would have resulted in an all-time record turnout for a 20 Milers ride? The previous record turnout of 38 in June 2013 was beaten as 43 turned up for today's ride. Other Edinburgh cycle groups must be wondering how we do it. There's no secret formula. We simply arrange interesting rides with good company and make sure everyone feels welcome. The unsung heros of the group are those that put in the effort behind the scenes planning and recce-ing the routes and deciding on suitable lunch stops to ensure everything runs smoothly on the day.

You could see the leader, Michael's jaw drop as more and more riders arrived. We split into the customary two groups and headed down to cross the canal at the Leamington bridge, before carrying on down through the Telfer subway. Russell Road was closed to traffic for bridge repairs; but fortunately not to cyclists. We pressed on through Roseburn Park and past Murrayfield Stadium to join the Water of Leith path which we stayed on until Curriehill. The leading five of the second group missed the turning and ended up in Balerno, whilst the remainder of the group were paying attention and took the correct turning. A minor detour via the busy Lanark Road West got them back on the right route and we all headed into the back entrance of the Heriot Watt Riccarton campus for our lunch stop. 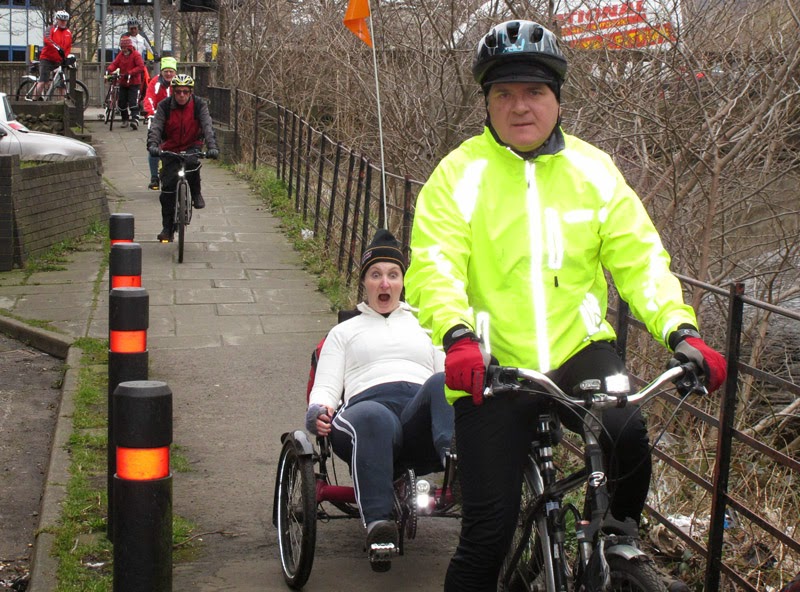 The large canteen was ideal for accomodating such a large group. In addition to getting lunch, the group met up with 20 Milers regular Livia and 3 month old baby Matthew who was presented with a teddy bear (almost as big as him) wearing a 20 Milers tee shirt. The 20 Milers main man, Mike Lewis was also presented with a card from the group in recognition of his 70th birthday. Happy birthday Mike. Suitably refreshed, the group said "goodbye" to Livia and Matthew and set off towards Edinburgh Park. We went past the lochs and busts of poets and onwards towards the Gyle shopping centre. As we made our way through the busy car park, we were relieved to be cycling rather than shopping on a Saturday afternoon. We carried on past South Gyle station, through Broomhouse, past the back of the Forestry Commission headquarters and onto the cycle path skirting Carrick Knowe golf course. This took us back to Murrayfield and we returned to the start by the same route we had headed out on earlier.

Considering the record turnout, the ride went smoothly. The only mechanical issue of the day was a thrown chain which was quickly fixed. Leading a large group is quite a challenge. So all credit to Michael on a job well done. I wonder how long until this record is broken?

Posted by Glenn Brearley at 00:03 No comments:


Our March ride will be this coming Saturday (14th). Michael (Law) will be leading us out of town along the Water of Leith, returning by way of Hermiston, the Gyle and Roseburn. This promises to be a pleasant run, with just a few moderate hills and one or two rough paths. The total distance should be about 22 miles.

For lunch, we'll stop at the Heriot-Watt campus, where there is a useful cafeteria as well as seating for those who bring their own food.

As always, we'll set out at 10.30 from the top of Middle Meadow Walk. Remember, there's no need to let us know in advance if you will be coming. Just turn up on the day.
Posted by Mike Lewis at 09:11 No comments: