Christmas Day this year was one of those rare Edinburgh days that help make our winters tolerable: crisp and cold, with a clear blue sky and no hint of a breeze. It was an ideal morning for our ninth Christmas ride. Around eighteen riders turned up: a mixed group, with ages ranging from Primary One to Bus Pass.

Under Jim's leadership, we started out by way of Tolcross and Lothian Road, then on to Festival Square, Rutland Square and the Gladstone Monument, where we paused briefly. After a circuit of the West End crescents, we did a double figure of eight around the precincts of St Mary's  Cathedral. This was an interesting section of route, giving us a chance to take in such notable buildings as Coates House, the Chapter House and the Song School: places we would never see on an ordinary bike ride.

Next came our traditional traverse of Princes Street, which was very quiet, with only an occasional bus and taxi. After weaving through St Andrew Square and York Place, we hit Leith Walk. We took advantage of the segregated bike lane as far as Balfour Street, from where we headed into Pilrig Park for a longer stop in front of Pilrig House. Here various treats were produced, not least of which was some warming mulled wine – very welcome.

Back in Leith Walk, we continued to New Kirkgate and then round the edge of Leith Links before returning on the Walk as far as Elm Row. We then bumped along the cobbles of Royal Terrace and Regent Terrace, skipping our traditional visit to the Stones of Scotland, but still enjoying the fine views over Holyrood and beyond.

And so to the climax of the ride: the ascent of Calton Hill. This was extremely busy with tourists, a large majority of whom appeared to be Chinese. Unlike on our previous two Christmas runs, the visibility today was superb, with clear views over the Firth of Forth to the Fife hills. We did a circuit of the summit paths, after which Jim declared the ride officially over. Some of the group headed to a Lebanese restaurant in Newington, while the rest of us went our separate ways. Thanks to Jim for coming up with such an interesting route for what turned out to be another excellent and successful Christmas run.


This is to remind you that we have our traditional Christmas morning ride coming up next week (Wednesday 25th). As always, it will be free and open to all, so feel free to tell your pals.

Like all our Christmas rides, this will be a leisurely affair. We'll take a gentle saunter around town with plenty of stops along the way. There will be one or two hills but we'll take these slowly and we'll cheerfully wait for stragglers.

One of the nice things about cycling on Christmas day is that the roads are much quieter than usual. We'll take advantage of that to take in parts of the city where we might not otherwise ride.

We'll set out at 10:30 from our usual meeting point at the north end of Middle Meadow Walk. The ride will end back at the Meadows at 13:00 at the latest (possibly a bit earlier). Of course, you can always peel off earlier if you need to be somewhere else for lunch.

Note that there will be no cafe or pub stop of any kind. That said, people often bring a snack or a treat to share on these rides. You might want to do the same.

There's no need to let us know if you are planning to join us. Just turn up on the day.
Posted by Mike Lewis at 09:19 No comments: 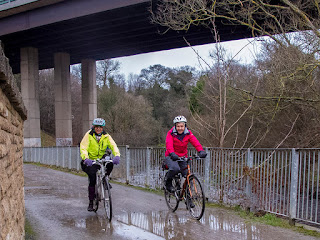 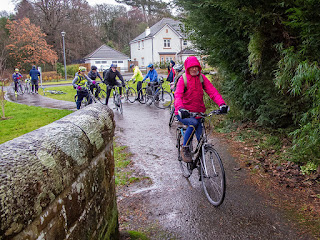 Posted by Glenn Brearley at 23:52 No comments:


We've got two rides coming up this month. I hope we'll see you on one or both of them.

Our main December run takes place this coming Saturday. The route is one that Jim pioneered last winter but which we had to curtail because of bad weather. We will be heading to the delightful Covenanters Wood in Dreghorn, where we will have another chance to see the giant sequoia trees: something more usually associated with the redwood forests of California than the south west of Edinburgh.

We will then head out along paths and quiet roads to our lunch stop, which will be at the Heriot-Watt campus at Riccarton. The cafeteria there serves a range of sandwiches and snacks, usually with at least one hot dish on offer. There is plenty of indoor seating there, so those of us who prefer to bring a packed lunch won't have to huddle in the cold for once.

In deference to the short daylight hours, this won't be a long ride: about 19 miles in all. There will be a steep climb near the start and a couple of other moderate hills along the way, but the rest of the route should be reasonably flat. Most of the route will be on firm surfaces except for a few short sections that might be a little rough and possibly muddy.

The logistics are the same as always. We'll meet at the north end of Middle Meadow Walk in time for a 10.30 departure. It will be dark at about 4 pm on Saturday, and although we should be back in town before that, you will almost certainly need lights to see you home after the ride.

For the ninth year running, we will be having what has become a traditional event for our group: a half-day ride in and around the city centre on Christmas morning. This will be a leisurely ride with several interesting stops, starting at 10.30 and ending at 13:00 at the latest. I'll post more details nearer the time.

Needless to say, both the above runs are free and open to all, so feel free to tell your pals. And, of course, there is no advance booking for any of our runs.
Posted by Mike Lewis at 08:57 No comments: