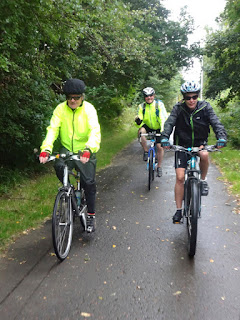 Posted by Glenn Brearley at 23:16 No comments:


We've got our September ride this coming Saturday (12th). We'll be heading into Midlothian. The route will be a straightforward one, but be warned that there will be a couple of long-ish stretches on busy main roads, as well as a few rough paths which might be muddy.

Our lunch stop will be in Roslin. There is a pub and a café there, and also a pleasant spot for a picnic.

We'll meet as usual at the top of Middle Meadow Walk, in time to leave by 10.30. There's no need to contact us in advance; if you can make it, just turn up.
Posted by Mike Lewis at 08:20 No comments:

I rode over 50 miles for a packet of crisps? 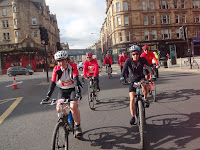 Making up one thousandth of the entry, an intrepid team of eight 20 Milers made the journey west to Glasgow to ride this year's Pedal for Scotland. An uneventful coach trip over, we found ourselves at Glasgow Green, reunited with our bikes, we crossed the start line and began our journey back towards Edinburgh. Riding through central Glasgow on closed roads and being waved through red lights by police officers was a joy. On reaching the suburbs we even found we had dual carriageways to ourselves. An opportunity to ride in the outside lane just added to the experience of the day. Even the weather was on our side. Lovely blue skies, warm with just enough of a cooling breeze to stop it getting too hot. Who said it always rains in Glasgow? 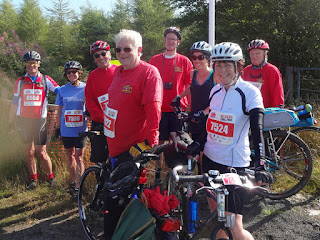 We left Glasgow behind and rode on through pleasant countryside to our first feeding station at Drumpellier Country Park where we stopped for refreshments. The group almost had a mutiny to deal with when it was discovered there were no Tunnocks caramel wafers left. Perhaps we should have chosen an earlier start time. At this stage of the ride the group stayed together quite easily and there were not too many other cyclists to get in our way. That would come later. We carried on, marvelling at how lovely the countryside between Glasgow and Edinburgh is. So different to dashing along the M8 motorway. We'd often turn to eachother and ask where we were. None of us knew the area well and we ended up reading the signposts before giving up and just enjoying being wherever we were. On through Longriggend and Limerigg we arrived at the second feeding station at Avonbridge. Here we found hundreds of cyclists queuing for the home baking on offer. After a brief rest and sharing the food we had brought with us, we hit the road again heading towards the lunch stop at Linlithgow Palace. It was on this stretch that it became clear that this year's route was much tougher than in previous years. There were some seriously steep climbs and plenty of them. The 20 Milers peleton began to split on the hills. With so many others getting off and walking, it was quite a challenge to thread our way through. Hill after hill led to tiredness setting in. One of the team made the fatal error of changing up three gears instead of down which resulted in them grinding to an halt. It was on this stretch that one of the funniest moments of the day occurred. A group of Glaswegian guys were struggling up an hill past a group of first aiders. One of them asked the lady if she had anything for a sore bum. Quick as a flash she replied, "I'll get big Jimmy to rub it better for you!" The guy fairly flew up the rest of the hill! On a more sombre note, we descended a very steep hill with a tricky bend at the bottom. Within a hundred yards there were two injured cyclists being patched up by first aiders. It was on this stretch that one of the team was riding along, heard a loud bang and wondered what it was, before realising he had just suffered a puncture. Three of them fixed it and made their way to the lunch stop some way behind the rest. 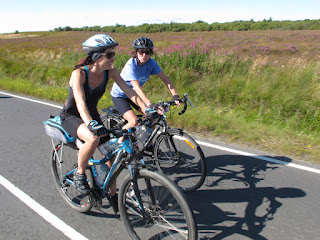 It was very busy at the Linlithgow Palace lunch stop. Were we ready for lunch? There were five packets of egg and cress sandwiches and a table groaning under the weight of cuss cuss salad. We may have been at the palace; but this was no feast fit for a king! Lunch was something of an anticlimax after 30 miles of hard riding. Back on the road again, we consoled ourselves by riding on the right hand side of the [closed] roads. One of the team said it was as close as he would get to a continental cycling holiday this year. The hills kept coming and more threading between weary walkers followed. One of the team was talking to a young woman who had never ridden a bike before doing this event. Talk about a baptism of fire! There would probably be others that would never ride a bike again! We swept past the Kirkliston Leisure Centre feeding station without stopping. We were now on familiar roads and on the home straight. An uneventful ride took us back to Murrayfield and the finish. A shame we didn't get to ride through the stadium this time. No one ever does these sort of rides for the goody bag. But this year's was particularly disappointing, and there was no medal. Quote of the day from Dawn summed it up, "you mean I rode over 50 miles for a packet of crisps?" But it had been a great day. It was about 54 miles and we had done it at an average speed a couple of miles per hour faster than a typical 20 Milers ride. The hills had made it more of a challenge. We had enjoyed it and finished with a well-deserved sense of achievement. It must have been seriously tough for the many occasional cyclists that did it. Those of us on the team now realise that going out most weekends in all weathers really does pay dividends.

Posted by Glenn Brearley at 23:45 No comments: