Despite the atrocious weather … 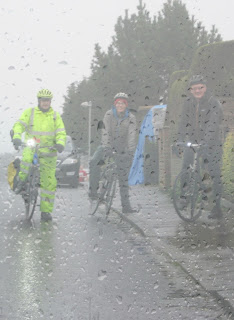 … our January ride went ahead. And what atrocious weather it was. Heavy rain, getting steadily worse throughout the morning, and winds gusting to 40 mph and more. Four riders turned up for the run, our first of 2020. All things considered, that was a surprisingly good turnout.

The original plan had been to follow a circuitous route through the west of the city, taking in Hermiston, Gogar, Turnhouse and Cammo, with a lunch stop at Craigie's Farm. After some discussion, our leader, Alan, decided that we would go ahead with the ride, but we would take a more direct and less exposed route to Craigie's. This was a sensible decision, given the conditions.

But even that curtailed route proved too much for your scribe, who bailed out soon after passing the Craigleith path junction. The other three bravely continued for a while. By Cramond Brig the rain had turned into a deluge, forcing the riders to take shelter in the tunnel under the Queenferry Road. At that point, the leader decided to head for home.

With just two riders remaining, Graham takes up the story:

"Exiting the tunnel, the rain was still falling, but not as intensely as ten minutes earlier. Out along the Kirkliston road, there were streams of water criss-crossing the road and at one point, the whole width of the road was at bottom bracket depth. Up the hill, we reached the sanctuary of Craigie's Farm. After a nice lunch, we re-dressed in our dripping jackets, wrung out our gloves and headed for home, retracing our earlier route. We were now at a point where we couldn't possibly get any wetter, and with the weather slightly improving, we decided to extend the ride. We turned left at Whitehouse Road and headed for Cramond. A whiz down School Brae took us to the waterfall, whose normally sharp edge was radiused with the huge volume of water. We then cycled downstream to the estuary, took in vistas of Cramond Island and Fife before heading along the esplanade to Granton. Here we climbed up through Forth Quarter and back on to the cycle path to return to Craigleith, where we parted company."

We can now look forward to some good rides in the coming year. Surely the weather cannot be this bad again?


We've got our first ride of 2020 coming up on Saturday (11th). Alan will be leading us on a route that takes in bike paths and quiet roads in the west of the city, with a lunch stop at one of our more popular eating places, Craigie's Farm.

The route is likely to be little over 20 miles. It will include a few short stretches on rough paths that might be muddy in places. The only serious hill to worry about will be the climb up to Craigie's from the Kirkliston Road, which we'll reach just before lunch. Lunch will probably be on the late side, with a quick return to the Meadows in the afternoon. The ride should finish well before dark but it would be wise to bring lights in case we get delayed or if you want to go for a post-ride coffee (sunset on Saturday is just after 4 pm).

Craigie's Farm has both a cafe and a picnic area. The cafe does a good range of hot dishes, salads, sandwiches and the like.

We'll meet as always at 10:30 at our usual spot on Middle Meadow Walk. Remember, there is no advance booking for our rides. Just turn up on th day.

Please keep in mind that the above information is provisional. The meeting place and time are fixed, but, as with all our rides, we reserve the right to change the route or destination at short notice, depending on conditions on the day. This doesn't happen very often, but we might need to do it, for example if some of the paths are icy or if particularly bad weather is expected later in the day.
Posted by Mike Lewis at 09:42 No comments: