It's November? Surely not! 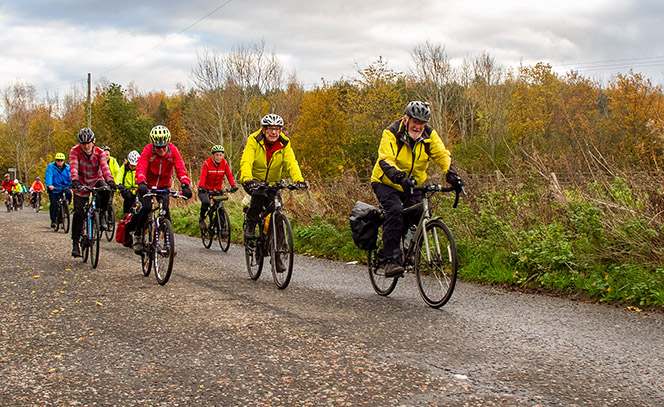 We don't keep a record of temperatures on our rides. We often remember them for either exceptionally good or bad weather. But today must have been the warmest November ride we've ever had. Sunny, barely any wind and 14°C in November was amazing. A lovely day to head to the Edinburgh International Climbing Arena (EICA) at Ratho. Some of the group even sat outside at lunchtime. The weather obviously played a big part, but getting 24 riders in November was very impressive. Great to see a few new faces in the mix as well. 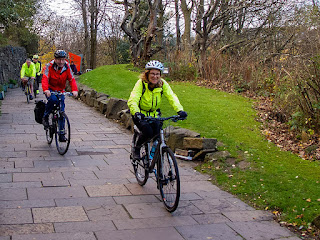 With the leader's route and safety briefing over, we headed to Murrayfield via our familiar route taking in Bruntsfield Links, Leamington Bridge, Fountainbridge and the Telfer Subway. Leaving Murrayfield behind, we crossed Balgreen Road and headed up the side of the distinctive Jenner's Depository to join the cycle path. Quiet back roads took us through Carrick Knowe and Broomhall. We crossed the busy Meadow Place Road and were soon at South Gyle station. A short stretch of quiet path, and soon we were mixing it with the Saturday morning traffic in the Gyle Shopping Centre car park. We cut through to Edinburgh Park, under the tunnel and emerged at Gogar Station Road, before turning onto a quiet minor road past Kellerstain. More quiet roads took us to Ratho. This was a lovely section - it was so quiet and peaceful and great to be out in the lovely weather. It could almost have been a spring day. We climbed out of Ratho and joined the B7030 at Bonnington. Along the road, turn right and we followed the road to the EICA and our lunch stop. Some of the group bagged the two picnic tables for an al fresco lunch, whilst the others headed inside. 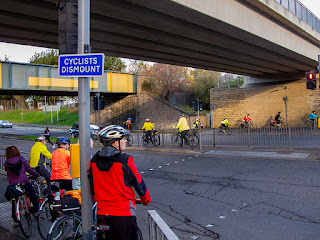 There is a rough path behind the centre that we sometimes use on the homeward route; but the recce a few weeks previously had shown it to be very rough and wet. Instead we took the road back to the B7030, turned right and headed towards the bridge carrying the M8. Turning off, we headed up to the Union Canal towpath and began our journey back towards Edinburgh. We passed the steep steps leading up to the EICA and on past the Bridge Inn at Ratho. The group became stretched out along this section. The majority kept up with the leader, but a handful fell back and lost sight of those ahead. That is when the doubt set in. Had a turn off been missed? The decision was taken to phone the leader and check. The reply came back that the leading group was waiting at the next bridge. This was the mythical "hump back bridge" that the leader had been talking about, but no one really knew which bridge he meant. It was Union Canal Bridge number 14, which we had actually ridden over on the outward route. The group was back together. Following some ribbing from the leader like, "how can anyone get lost on the canal?", we retraced our outward route back to Edinburgh Park and onwards to Edinburgh Park station. We followed the cycle path at the top side of Sighthill and Broomhouse, crossed the tram tracks and sped down to the Jenner's Depository on Balgreen Road. From there we retraced our steps back to the Meadows, where the leader declared the ride officially over.

Thanks to Alan for leading us on an interesting route with a good lunch stop, and thanks to Yaz for back marking. A good ride that was enjoyed by all. The unseasonably good weather clearly played its part.

Posted by Glenn Brearley at 23:09 No comments:

We've got our November ride coming up on Saturday (12th). Alan will be leading us on an interesting route through the west of the city, heading out to Ratho. The total distance will be about 24 miles. There will be a couple of short steep hills, and a mile or two on a very rough track which might also be muddy. But apart from that there should be no particular difficulties.

Our lunch stop will be at the Edinburgh International Climbing Arena. Although there is a cafe there, we advise you to bring a packed lunch. That's because, on our recent visits, the service at the cafe has been very slow, so you could well spend most of the lunch break in the queue. But don't worry: you won't need to picnic in the open air. There is plenty of indoor seating, including an area overlooking the spectacular 30-metre climbing wall (which claims to be the largest of its kind in the world). There are also vending machines serving hot drinks.

As always, we will meet at the north end of Middle Meadow Walk in time for a 10:30 departure. The ride should end well before dark, but it would be advisable to bring lights in case of delay. The ride is, of course, free and open to all. As you know, we don't have a booking system and there is no need to reply to this post.

Looking ahead, we will once again be organising a short ride for Christmas morning (25 December). This time it will be a joint venture with our friends at EasyCycle. I'll post details once these have been decided, so for now just note the date. This ride will of course be in addition to our normal monthly run, which will be on the 10 December.