At least there was no wind ... 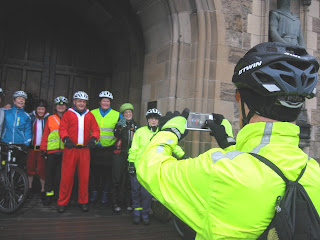 There's no other way of describing it. As far as the weather was concerned, this year's Christmas morning ride was a washout. The 40 mph winds of recent days had gone. What we had instead was incessant rain, often heavy, which lasted well into the afternoon.

But the eleven riders who turned up at Middle Meadow Walk were all in good spirits, determined not to let a bit of dampness spoil the morning. Fortified along the way with mulled wine and other treats, the ride proved to be an enjoyable one – at least until the final couple of miles when the cold and wet started to take its toll.

Our first stop was the Castle, where we did a circuit of the esplanade and posed for photos next to William Wallace. The Pentland Hills were just about visible through the murk. We then headed down the Mound for our traditional traverse of Princes Street. Not surprisingly, the city centre was dead. A few buses and taxis were to be seen, as well as the usual forlorn tourists looking in vain for something to do. Apart from that, we had the place pretty much to ourselves.

The next stage took us to the summit of Calton Hill, where we toasted the season with the aforementioned mulled wine, which was much appreciated (thank you, Michael). We then headed down to Greenside and through empty streets to Easter Road. At the Easter Road / McDonald Road junction, we experienced the new bike-friendly traffic lights, where a special green light gives cyclists a momentary priority over other traffic. 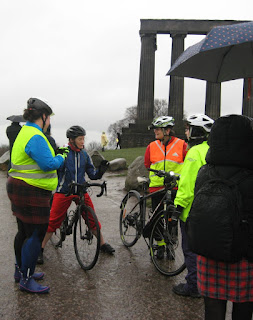 Our route then took us to St. Mark's Park, then via Five Ways to Goldenacre, Inverleith Park, Stockbridge and along the Water of Leith, which was unusually fast-flowing because of the rain. At Dean Village, we crossed the river by the narrow footbridge, then headed up Belford Road. By now, we were thoroughly wet and cold. By the time we reached the West End, about half the party had either peeled off or were seriously considering doing so. So at about 12.30, and with just under eight miles on the clock, we declared the ride officially finished. We went our various ways, with most of us heading for a hot shower, a change of clothes and a good meal. What better way to spend Christmas?


We've got our usual half-day ride planned for Christmas morning (Monday 25th December). If you've nothing better to do, I hope you'll join us. Like all our rides, this one is completely free and open to all, with no advanced booking.

One of the nice things about cycling in Edinburgh at Christmas is the relative lack of traffic. We'll take advantage of that to visit parts of the city centre where we might not otherwise cycle. The pace will be slow to moderate, with plenty of stops. There will be a couple of steep climbs, but we'll take them gently, and happily wait for stragglers.

There won't be a café or pub stop, so you might want to bring some nibbles to keep the hunger pangs away.

We'll meet at our usual spot at the north end of Middle Meadow Walk, in time for a 10:30 departure. The ride will end at the Meadows at 13:00 at the latest. We will be within the city the whole time, so if you've got lunch plans, feel free to peel off early.

Our friends at EasyCycle have their usual monthly ride on 31st December. See https://easycycle.wordpress.com for details.

And we've got two rides planned for January. On the 6th, Jim will be leading a Back to Basics run. These are short half-day rides, aimed especially at the less fit amongst us. And the following week (13th), Alan Orr will be leading our standard second-Saturday run. Both these rides will start from Middle Meadow Walk at 10:30. I'll post more details of these in due course.

That's all for now. I hope to see you on one or more of the above rides.
Posted by Mike Lewis at 09:51 No comments: 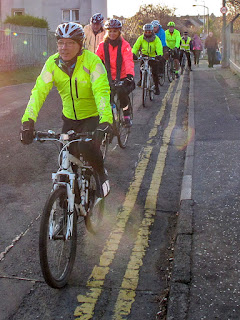 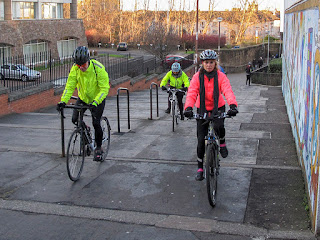 Posted by Glenn Brearley at 23:12 No comments:


We've got no fewer than three rides planned for the coming weeks. Details below.

The first of these rides will be our standard monthly run this coming Saturday. Our route will depend on the conditions on the day, but it's likely that we will be heading out towards Colinton and Currie, returning by way of Edinburgh Park and the Gyle. Our lunch stop will be the spacious canteen at Heriot-Watt's Riccarton campus.

In deference to the short winter days, this will be a short ride and a fairly slow one. We'll aim to finish at around 3 pm. If anyone wants to get home earlier than that, there will be the option of a shortcut back to town via the canal towpath.

As always, we'll meet at 10.30 at the north end of Middle Meadow Walk. Sunset on that day is 15:40, so I strongly recommend that you bring lights in case of delay and to see you home.

This will be our traditional Christmas morning ride. This is a popular event which often attracts a large turnout. I don't have any details of the route yet, but the general idea is to take advantage of the lack of traffic in order to visit parts of the city centre that we might otherwise avoid.

We'll leave from our usual spot in Middle Meadow Walk at 10.30, returning to the Meadows by 1 pm at the latest. There will be no café or pub stop, so you might want to bring a little snack to keep your energy levels up.

For the third of these three runs, Jim will again be organising a Back to Basics ride. If you haven't done much cycling lately, or if you are feeling below your normal fitness level, this ride is for you. It will go a little slower than our normal runs, take slightly longer breaks and try especially hard to avoid nasty hills. This is just a half-day run, finishing around 1 pm. I'll post more details of this event nearer the time.

All of the above rides are of course completely free and open to all. There's no advance booking, and no need to reply to this message. Just turn up at the appointed time and place.
Posted by Mike Lewis at 11:51 No comments: