An educational in-town ride for March

For this month's ride (9th March), we took an unusual route through the south and east of the city. Ten people turned up, which I thought was pretty good, considering the awful weather (steady rain and a freezing easterly wind).

We headed out through the Grange and were soon climbing the eastern slopes of Blackford Hill. We paused for a few minutes while our leader, Andy Hunter, pointed out an exposed outcrop known as Agassiz Rock. It was here in 1840 that the Swiss geologist, Louis Agassiz, noticed the distinctive grooving in the rock, which he attributed to the action of ancient glaciers - an observation which laid the foundation for modern theories of geology.

Fortified with that knowledge, we continued down Blackford Glen Road, across Gilmerton Road, and into the Inch Park. After crossing Old Dalkeith Road, we climbed a steep path towards the back of Craigmillar Castle. The path was narrow and somewhat muddy, and we ended up pushing our bikes most of the way up. 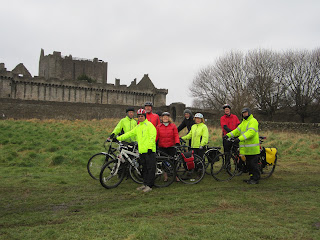 While stopping for a breather near the castle (see photo), Andy told us how Mary Queen of Scots, who lived here at various times in the 1560s, would look out over the fields where we now stood, and where her French entourage was camped. She is said to have referred to the view as "my little France". The name stuck.

A short downhill run now took us to Duddingston Road West, and then to the familiar Innocent Railway path. We left the path at Magdelene Gardens, and headed north by Hope Lane, and so to the Portobello Promenade to look for a lunch stop.

By now, the wind was on the attack with renewed vigour, and the footway was being drenched by spray. With a chill factor well into the minus zone, even the hardened picnickers amongst us decided to forgo the idea of an al fresco lunch. Instead, we opted for the Espy pub, which was warm and welcoming.

As you can imagine, it took a good dose of willpower for us to drag ourselves back to the bikes after lunch. The rain had now stopped, but the wind was still bitterly cold, and we had to dodge the waves as we continued along the prom.

At Seafield, we left the shore, and used the excellent new access point to get to the path by the cemetery. This much-impoved path reaches Leith Links by means of a useful new bridge.

After crossing the links, we headed to the Water of Leith path, which we followed all the way through Warriston, Canonmills, Stockbridge, Dean Village and Roseburn. Most of the group peeled off at various points along this section of the route, so with only three riders remaining, the ride was officially declared finished at Ashley Terrace. At 21 miles, it was another excellent run - and an educational one at that.

This Saturday's ride will be a chance to explore some interesting bike routes within the city. We'll be cycling on paths and quiet roads for much of the way, with no particularly difficulties of any kind. Depending on the exact route we take, the total distance will be between 18 and 22 miles. Our leader will be Andy Hunter.
For lunch, we'll stop at a cafe in the Portobello area, where we'll be able to get sandwiches or hot snacks. There's also be a nice picnic spot for those who prefer to bring their own food.
As always, we'll set out from Middle Meadow Walk at 10.30, with the ride finishing some time around mid afternoon. The ride is completely free and open to all, with no need to book in advance.
Posted by Livia at 23:05 No comments: