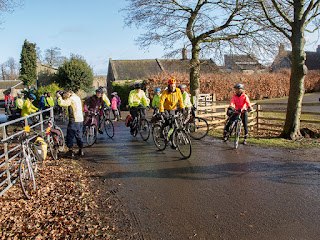 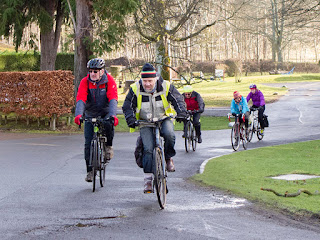 
Posted by Glenn Brearley at 23:02 No comments:


We've got our next ride on this coming Saturday (10th February). I hope you'll be able to join us.

Verity will be leading us on a tour of bike paths and quiet roads in the south of the city. Our route will include Danderhall, the Drum, Gilmerton, Burdiehouse Valley Park, Mortonhall and Braidburn Valley Park, finishing with a loop to Colinton and back along the Water of Leith. As far as gradients are concerned, I'm told that we can expect undulations rather than killer hills. The total distance will be about 23 miles, mainly on good surfaces but with a few rough tracks and a couple of short sections on main roads.

For our lunch stop, Verity has managed to find a venue that we have not visited before as a group. This is the café at the Braid Hills Golf Centre in Liberton. Their menu includes a range of sandwiches, baked potatoes, burgers and the like. As always, you have the option of bringing your own lunch if you prefer.

We'll meet at our usual spot at the north end of Middle Meadow Walk in time for a 10:30 departure. We should get back to the Meadows around 15:00 or so, which will be well before dark (sunset is at 17:08), but it might be wise to bring lights in case we get delayed, especially if you live some distance from the end point.

Remember, our rides are free and open to all, with no advanced booking.
Posted by Mike Lewis at 09:30 No comments: