Eight out, two back – a damp weekend to Perth 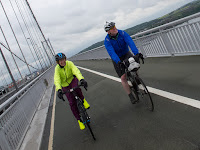 The fourth annual 20 Milers weekend away saw us head north to the fair city of Perth. What turned out to be a damp, and at times downright wet and blustery weekend saw eight set out on Saturday morning. But only two rolled back into Edinburgh in the early evening sunshine on Sunday. Whilst that may seem like a terrible rate of attrition, it wasn’t quite as bad as it sounds. 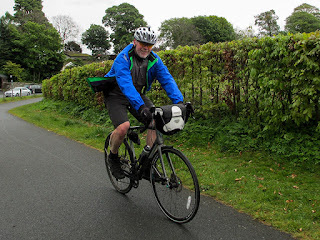 On a cool damp Saturday morning, a mere eight riders met at the Craigleith marker to begin our journey to Perth. No doubt the weather played a big part, but this was the lowest turnout since our weekend away rides began in 2014. With us all in waterproofs, we headed off along the familiar path towards South Queensferry and the Forth Bridge. One of the group fell courtesy of an uneven drop kerb at Dalmeny. Fortunately, no injury or damage occurred and we carried on through the new housing estate. As we got closer to the bridge we stopped to speak to an old lady walking her dog. She told us she thought the bridge was closed to cyclists as a result of kestrel damage! On arriving at the bridge, we discovered this was not the case. But it certainly made us smile and cropped up in the conversation a number of times over the weekend. Our concern at the bridge was the chaos caused by the roadworks. We are so used to quickly and smoothly making our way to the foot and cycleway on the eastside of the bridge. But not today. We had to negotiate our way to the westside before we could begin our crossing. Once across we were confronted with miles of cones, rope and strange door frames at crossing points. There was one benefit. The usually horribly busy road into Inverkeithing was as quiet as most of us had ever seen it. We left Inverkeithing behind us and headed towards Dalgety Bay. From there we found ourselves on the B901 Clocklunie Road – not Clock-the-loony as some on the group had christened it. This was a steep road that went down into the valley before climbing out at the far side. 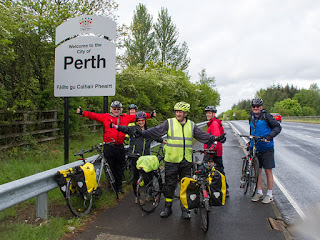 Being a busy and narrow road meant we were delighted to see a lovely wide, well surfaced cycle path running alongside. Two brave souls wanted to whizz down the road and see how far up the other side their momentum would carry them. The rest of the group took the path not caring that a gateway at the bottom would scupper any chance of that. It was great zooming down; but it was very hard work going up the other side. We then pressed on through Crossgates, Cowdenbeath and on to Kinross. In Kinross it began to rain heavily. Fortunately, our lunchstop, the Muirs Inn emerged from the gloom and we rushed inside. The rain continued as we enjoyed a lovely lunch. We didn’t rush. One of the group had been checking train times and urged us to get a move on so he could make Perth in time for his train back to Edinburgh. Well, it was time to get moving and the rain had stopped. We made our way through Milnathort and turned left up a minor road towards Netherton. A sign told us this road was closed, but fortunately we were able to get through. On this road about ten horses decided to gallop up and down their field for a few minutes. Perhaps they didn’t get to see many cyclists. We passed through Colliston, Drunzie, Duncrevie and Glenfarg. Near Dron we found ourselves on a beautiful long descent. It may have been a minor road, but the curves were gentle and the surface smooth and free of the dreaded gravel. Some reported hitting 40 mph here. Then came the cloud burst. There was no shelter on this stretch. We had agreed to regroup beneath a bridge that carries the M90 motorway. There was plenty of room under the bridge. It looked as if the weather had set in for the day. We anticipated it being like that all the way to Perth. The rider who wanted to catch his train realised he would make better progress alone, so left us and headed out into the rain. Astonishingly, a few minutes later the rain stopped and the sun made its first appearance of the day, and that’s how it stayed as we made our way into Perth. One rider headed off to meet their lift home, whilst three piled into a strategically parked van for their return to Edinburgh. And then there were three. We made our way to our overnight accommodation, enjoyed the luxury of a hot shower and change of clothes before meeting up for dinner. Obviously, dinner was less lively than in previous years due to depleted numbers. 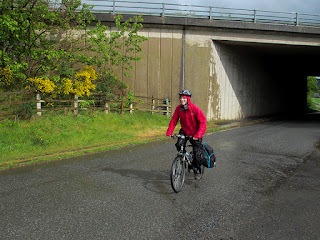 On Sunday morning, the three remaining riders met beside the main road bridge across the Tay to begin our journey back to Edinburgh. It was dry, bright but cloudy and a touch cool. We retraced our route from the previous day. With the beautiful steep descent near Dron now ahead of us as a most foreboding climb, the leader turned left on to a flat road. Phew! This quiet road led us to the A912. We headed south on this fast twisty road keeping in single file. There was some traffic, but being a Sunday morning it was not overly busy. This led us to our morning coffee stop at the delightful, friendly and welcoming Bein Inn. From there we went through Glenfarg, Duncreavie, Drunzie and Milnathort before arriving at Loch Leven Larder for lunch. The café there looked very nice. But the “you’ll have to wait at least 20 minutes for a table” did not appeal. We got some food from the deli and sat outside, but under cover as it was now raining. In a field closer to Loch Leven a cricket match continued despite the rain. At this point one of the group left us to head to Cowdenbeath for a train back to Edinburgh. And then there were two. We headed down to the loch. A lovely path and fine views should have made this part of the ride lovely. But there was a drawback – the swarms of flies and midges. It began to make sense why so many cyclists heading towards us had their faces covered as if they were on their way to rob a bank. On leaving the lochside and getting back on the road the wind got up. This annoying headwind did not seem to let up until we were back in Edinburgh. This headwind and some dull featureless roads made parts of our journey out of Fife something of a slog at times. At Dalgety Bay the leader suffered the first puncture of the weekend. He told the writer to go on. That wasn’t going to happen. The 20 Milers ethos has always been that we stick together. No one ever gets left on their own.  Puncture fixed and we were rolling again. Once more we threaded our way through the maze of roadworks to get onto the Forth Bridge. Thanks to the strong headwind, climbing to the highest point on the bridge felt like climbing a mountain. Eventually we got across. Not a kestrel in sight. From there familiar roads and paths took us back to the Cramond Brig Hotel for a well-deserved pint. We sat outside the pub in the early evening sunshine and shed our jackets for the first time all weekend. From there we returned to Craigleith where the ride was officially closed, and the final two headed home in opposite directions.

The weekend had been tough at times. Not Peebles tough, but no easy amble. There had been stretchs on some busy roads; but that was balanced by some lovely quiet lanes. Some of the climbs were tough, but going from Edinburgh to Perth – there are hills in between. Think of them as a challenge. Remember, there is no shame in walking up the steepest ones. Sometimes its quicker and easier than riding them! A big thanks must go to Jim for all the effort he put in to planning, recceing and leading the ride. Going out on his own recceing the route in the winter months deserves a mention in despatches, if not a medal.