With the leading ladies to South Queensferry 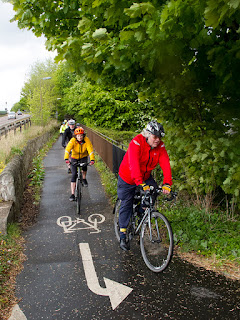 Today's ride saw us head out to South Queensferry. After a long spell of dry weather, what a shame today saw the first rain in weeks. With a break from tradition, today we had two leaders. Both Dawn and Ollie were leading for the first time. Between them they did a good job and can expect be asked to lead again. In amongst the 25 starters it was good to see a couple of new riders. It was cool, damp and misty as we headed away from the Meadows in one group. So, how does it work with two leaders and one group? On this occasion, Dawn led the group and Ollie back marked. We took the tried and tested route to the Leamington Bridge where the continued closure of the canal towpath forced us on to the busy Dundee Street. Having safely negotiated that, we went down the Telfer subway and followed the path to Dalry Road. After a short spell on that busy road, quieter ones led us to the zig zags and up onto the Roseburn path. This took us to Granton where we passed that local landmark, the Granton gasometer. On along the Silverknowes Esplanade to Cramond where we stopped whilst sweets and cakes were passed round. Whilst it was nice to have a break, the cool misty weather meant we were glad to be moving again. It was not a day for standing around. We rode beside the River Almond, before warming up on the short but steep climb up School Brae. A short run along Whitehouse Road before turning right down Peggy's Mill Road. This narrow road was new to many of the group and led us back beside the River Almond and on to Cramond Bridge. From there we made our way on NCN 76 through the lovely Dalmeny Estate. The earlier rain had damped down the dust a little. But a lot more would be needed to make the tracks truly muddy. We encountered heavy drizzle on the last stretch into South Queensferry. On the narrow High Street a lorry and coach had met resulting in traffic being at a standstill. It was easy for us to dismount and walk along the pavement to where we parked our bikes. Whilst most of the group headed to various cafes for lunch; four hardy souls sat in the heavy drizzle to eat their sandwiches. At one point, one of the picnicers even produced an umbrella. Talk about coming prepared! It soon dried up, but remained cool and misty. The group has been to South Queensferry enough times to have seen weather ranging from pouring rain to beautiful warm sunshine. We would have hoped for better in mid-May. 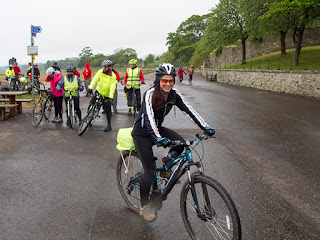 As we were preparing to get under way, a puncture was discovered. This was soon repaired and we were off. This time Ollie was leading and Dawn back marking. A short steep hill immediately after the lunch stop is never popular. But that had to be dealt with to reach the Co-op car park where we joined the cycle path to Dalmeny. Through the village and onto the cyclepath beside the A90 and we were soon back at Cramond Bridge. Making our way through Barnton, those at the back were surprised to see the leader talking to a pedestrian whilst the group had stopped further up the road. It appeared that the lady had wanted to find out more about the group. A new recruit perhaps? From there we took the familiar route back to the Meadows via Craigleith, the Roseburn path, Telfer subway and Leamington Bridge. As the ride ended, the sun was trying to peep through; but it remained cool and the wind was beginning to get stronger. New leaders; a new way of leading - two rather than one and a trouble-free ride; what more could anyone ask for? Looks like two more leaders have been added to the list.