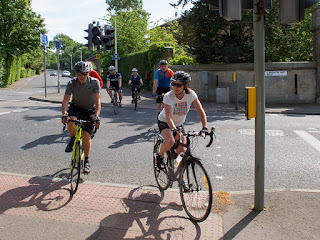 Following two days of glorious summer weather, today's opening 20 Milers Extra ride of the year looked set to continue the trend. The day dawned warm, bright and sunny. Alas, the forecast suggested something different later on. The promise of a heavy thundery downpour complete with hail around lunchtime did not bode well for the planned picnic lunch in Almondell & Calderwood Country Park. In the end we got to enjoy our picnic lunch in the dry. There was a bit of rain, but nothing like as bad as suggested. The weather of the previous two days and the lovely start to today resulted in a respectable 18 riders making the start. The leader had made it clear that the ride would begin at 1015 sharp, and it did. But riders finishing coffee and faffing about meant the ride was in disarray from the start. The one group that left the Craigleith start point was not back together as one unit until we reached the bridge at Cramond. A short distance up the A90 sliproad and we crossed to go through the subway. This detour was necessary due to the closure of the Burnshot Bridge. We found ourselves on the diverted route for cyclists and pedestrians. This consisted of a narrow track seperated from the fast moving traffic on the A90 by nothing more than cones and rope. It was a relief to ride up the slip road and follow the road to Kirkliston for a comfort stop at the leisure centre. We left the main road behind heading under a bridge carrying the M9 motorway. Beside a much older bridge, we were faced with a steep climb to join the railway path. A couple of hardy souls rode up it, whilst the rest of us got off and pushed. A short while later we joined the canal towpath to Broxburn before getting on the road to Uphall. Off road again and we were in lovely West Lothian countryside. 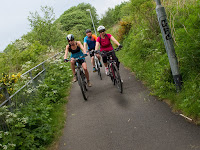 We paused atop the Camps Viaduct to admire the view and take photos. With the weather still on our side, we pressed on towards lunch. Probably the best kept secret in West Lothian, Almondell & Calderwood Country Park is tucked out of sight in the valley of the River Almond between Broxburn and East Calder. Behind the converted stable block house that is now the visitor centre lies a delightful garden complete with benches and picnic tables. That is where we enjoyed a picnic lunch. It remained warm but the sun was hidden by cloud. 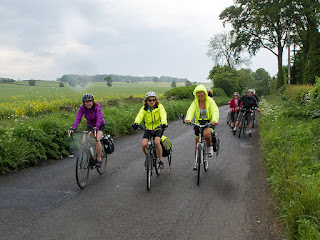 Lunch over, the first spots of rain were felt. There then began that silly indecisive dance. Shall we or shall we not put on our waterproofs? Some said it would make them too warm, some put them on, others copied what the person beside them did. We climbed the hill we had earlier whizzed down back to the entrance and the main road. It soon began to rain heavily and riders stopped to don waterproofs. Then it stopped raining. Some removed them, whilst others kept them on. It looked set to be "one of those days". We pressed on accompanied by changeable weather. Although annoying, the rain was not that heavy and continued to come and go. At the Bridge Inn at Ratho we joined the canal towpath and headed towards Edinburgh. We passed the lovely little Ratho Marina and stayed on the canal as far as Gogar Station Road. Leaving the canal behind we cut through to Edinburgh Park and the Gyle. Onwards through Broomhouse, we rode past Murrayfield where a couple of cricket matches were in full swing. At the bottom of the zig zags leading onto the Roseburn Path, the leader declared the ride over and we headed off in different directions. Thanks to Mike for leading an interesting ride out into West Lothian. Thanks to the weather for failing to live up to expectations - intermittent light rain was as bad as it got.