Today's ride could be summed up as, a low turnout; better weather than the forecast suggested; a relatively quick and trouble-free ride except for a puncture and arriving at our lunch stop very early. For the last few days the forecast had been telling us to expect a day of continual heavy rain. Perhaps that had frightened off a number of riders. Either that, or the lure of the Edinburgh World Naked Bike Ride had been too great! As it happened, the weather was nothing like as bad as expected. There was some rain at lunchtime and immediately after, but it could have been much worse. Even so, it was far from what we would expect in June. 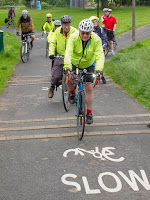 A total of just eleven riders mustered at the start. It may well have been a record low for a June ride; more the sort of numbers we would associate with a winter's ride in bad weather. Once again, there was no need to consider splitting into two groups. After the obligatory leader's briefing, we left the Meadows and set off in the direction of Dalkeith. Taking the familiar route of the Innocent Railway, we soon left the Meadows behind. The pace was a little faster than some 20 Milers rides, but it presented no problem for those present and we made very good time. A smaller group meant we were all able to get across at traffic lights, so having to wait and regroup wasn't necessary. We were even able to cross the busy road through Newcraighall without delay, something that is almost unheard of. We then sped along the cycle path to Musselburgh station where we stopped as cakes and sweets were passed round. Perhaps we didn't really need them, but it's a long-held tradition of our rides. We pressed on and joined the River Esk path (known as the Grove to the locals) to Whitecraig. There followed a short stretch on the busy A6094 towards Dalkeith. Leaving that far-from-pleasant road behind, we were soon heading along a quiet road into Dalkeith Country Park. Past the impressive "big house" - Dalkeith Palace, and we left the country park to emerge on Dalkeith High Street. A short ride through the town and we arrived at our lunch stop at 1155. It has been a long time since we arrived so early to lunch. Three riders headed off for a picnic lunch, some went into the pub and the remainder decided to risk al fresco dining despite the sky looking rather grey. Lunch was eaten outside; but as the rain got heavier, everyone retreated inside. 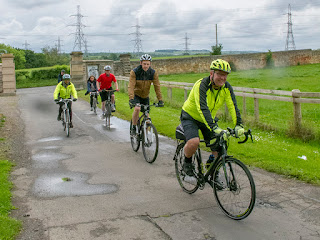 Although not too heavy, the rain was the sort you wouldn't want to stand around in, as we headed away from lunch. A few minutes later we were standing around in the rain as one unfortunate rider had suffered a puncture. Typical! Following a damp delay, the puncture was fixed and we were rolling again. As we took the cycle path towards Whitecraig, the rain became lighter before stopping completely. From Whitecraig, our return route was almost identical to our way out in the morning. The one exception being that we wheeled our bikes up and over the bridge at Brunstane station, rather than riding round via the road and path. Back at the Meadows, the leader declared the ride over as the rain began again. It was just after 1430. Thanks to Jim for leading a ride that everyone seemed to enjoy. We had made good, smooth progress despite the puncture delay and the weather had been better than any of us had dared hope. Here's hoping for better weather and a better turnout for July's ride. Come on summer, we're still waiting for you!