Three reservoirs and plenty of sun If today wasn't the warmest day of the year, it must have been very close. Our ride saw us head up to Harlaw Reservoir in the Pentland Hills. We had a slight delay due to a mechanical issue early on, and there was a minor incident with some cows. But overall an interesting route and glorious scenery made for a great day out, with the leader receiving numerous compliments at the end. 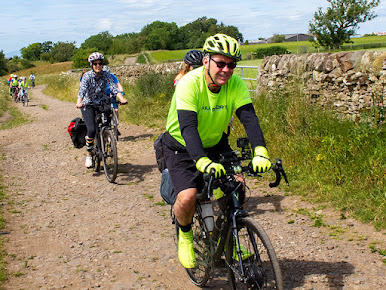 We had a reasonable turnout of 21 riders. Amongst the regulars there were a couple of new faces and a rider we hadn't seen since pre-Covid days. It was already pleasantly warm with the sun shining down from a blue sky, with a gentle breeze as the leader gave the customary briefing. With the briefing over, we headed off to the Leamington Bridge. A rider was having a mechanical issue. Quick as a flash, Alan was there to help. A quick adjustment and we were on our way. Unfortunately, the issue wasn't cured, so another stop ensued. This time the tools came out and the delay was longer. As this occurred at the back, the leader and rest of the group were oblivious and pushed on. Stopping to regroup at the entrance to Roseburn Park, the leader was informed of the situation. After a wait and a phone call, the missing riders appeared and we set off to Edinburgh Park via Broomhall and South Gyle. Travelling in the opposite direction to usual, we took the familiar route to the Heriot Watt University campus where we stopped for a comfort break. Leaving the campus behind, we made our way through Riccarton and Currie, emerging from the new housing estate for a short stretch on the busy Lanark Road West. Leaving Balerno behind, we began the long steady climb up Bavelaw Road and Mansfield Road.  Pausing to regroup at the top of the climb, we then headed up to the Harlaw visitor centre for our lunch stop. Some riders opted for the picnic tables in the garden, whilst the rest enjoyed their picnic lunch sitting on the banks of the reservoir. 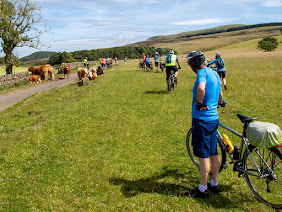 Lunch over, we headed away from the reservoir retracing our route to the road. Here we turned right  towards Currie. At the sharp left hander we went straight on rather than take the steep hill down into Currie. Shortly, the surfaced road came to an end and we were on a rough stony path for our descent past Clubbiedean and Torduff reservoirs. Before arriving at the first reservoir, following riders saw the leader stop, dismount and wheel his bike off the track and onto a wide stretch of grass. All riders followed his lead. Those at the back wondered what was happening; but as the drew closer, all became clear. A number of cows accompanied by their calves had decided to lie down in the middle of the path. To avoid disturbing or spooking them, the leader decided to give them a wide berth, especially as they had calves with them. Safely past and the lovely descent began in earnest. This was the most scenic part of the whole ride. The reservoirs and surrounding countryside look lovely at any time; but bathed in sunshine shining down from a clear blue sky looked absolutely stunning. Down off the hill and we were in the quiet back streets of Bonaly. The writer commented on how nice and colourful the houses looked. On too many previous occasions he had seen them on dull, grey and wet winter days. We headed on through Colinton, the estate behind Redford Barracks, Colinton Mains Park and Braidburn Valley Park. A short hop through the back streets of Morningside and we were on Whitehouse Loan. Here the leader declared the ride over. Thanks to Mike for leading an interesting and enjoyable ride. The numerous compliments he received were well deserved. Thanks to Alan for back marking and wielding the spanners.