A Fab day out 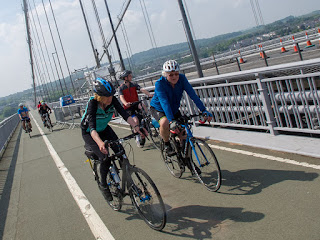 For our second Extra ride of the year we headed across the Forth to Scotland's ancient capital - Dunfermline. We were blessed with gloriously warm, if slightly muggy weather. Not surprisingly, thunderstorms were forecast for around 3.00 pm. That would keep us on our toes. On our way back, the leader kindly treated us all to Fab ice lollies in Inverkeithing.

Maybe potential riders had taken more notice of the forecast for thunderstorms than appreciated how warm it was at the time leading up to departure; but a turn out of just twelve riders was a little disappointing. Those that stayed away ended up missing a great ride in lovely weather. Following a briefing from the leader, we headed off on the familiar route via Silverknowes and Barnton to Cramond Brig. To everyone's surprise, the leader swept across the bridge there without stopping - an almost unheard of occurence! We took the path beside the A90 and on into Dalmeny village. From there we made our way past the new houses and through the back streets of South Queensferry to the Forth Bridges Viewpoint, where we had a comfort stop. From there, we headed onto the Forth Road Bridge. It is so nice now it is almost free of traffic - so much quieter; although everything still vibrates as a bus goes past. It was warm and there was barely any wind, but the mist did somewhat spoil the views. 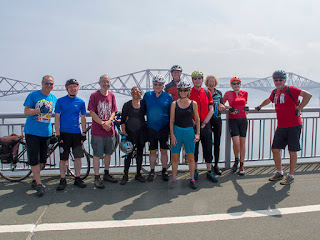 Such a contrast to an early recce for this ride back in March when the riders had almost been blown off the bridge by very strong winds. It had been so bad that the group caught the train home rather than risk crossing the bridge a second time. Across the bridge, we threaded our way through the paths and quiet roads in the area. It was great to cross the [once horrendously busy] road off the bridge without any trouble. There was a swirl of wind as we passed beneath a bridge; astonishingly [for Scotland] the wind was actually warm! We took the B981 and on through an industrial estate and past Rosyth Dockyard, before turning up and joining a road that took us past the MOD Caledonia camp. There followed a short stretch on the busy A985, before turning off onto Grange Road and making our way into Dunfermline. The delightful Pittencrieff Park was our lunch venue. Here we split into two groups, one made for the picnic tables whilst the other headed for the cafe and enjoyed lunch on the terrace. This was only the second Extra ride to Dunfermline, and on both ocassions we have enjoyed lunch sitting outside in Pittencrieff Park in lovely warm sunshine. 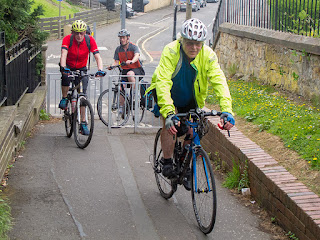 As we reconvened after lunch, the leader was conscious of the 3.00 pm forecast for thunderstorms. Whilst the pace in the morning had not been slow, it was certainly cranked up a notch or two on the homeward leg as we aimed to outrun the storm. We exited the park and were soon negotiating a mixture of busy roads and shared use paths in the centre of Dunfermline. It was good to leave them behind and head towards Inverkeithing. On this stretch, a kind car driver let us all across the road despite the lights being in his favour. We were most thankful, unlike the irate driver behind him who sped off giving him hand signals that are certainly not in the Highway Code! The phrase, "calm down dear" sprang to mind. Despite trying to outrun the storm, the leader stopped in Inverkeithing and very kindly bought everyone a Fab ice lolly. We retired to a quiet little park just off the high street to enjoy them and reminisce about Fab lollies and childhood days. At the far end of the park, through the trees was a view of an expanse of water. One rider said, "what a lovely pond". It was pointed out to them that it was actually the Firth of Forth! Ice lolly stop over, we headed back across the bridge and had a comfort stop at the Forth Bridges viewpoint. One of the group checked his phone and told us of heavy rain south of the City Bypass - it wasn't far away. From here on in the pace definitely picked up - we were on a mission. We took the same route as we had taken out in the morning. But this time we did stop at Cramond Brig to regroup. We arrived at Craigleith and it was still dry as the leader declared the ride over. Thanks to Verity for leading. A good route with some sections unfamiliar to most, lovely weather, great lunch venue and what a fab (groans all round) move buying us all an ice lolly. At the end of most rides, some of us finish off with a coffee. As we all felt the need to continue outrunning the storm, we gave that a miss today. In typical fashion, the storm never materialised. A little light rain hours later was as bad as it got.

One rider said, "what a lovely pond". It was pointed out to them that it was actually the Firth of Forth!