Somewhere new, with a bit of luck


Today's ride saw us head into uncharted territory. The leader who was leading his second Extra ride in as many months, took us into the depths of Midlothian - to Pathhead and beyond. For most this was somewhere new and unexplored. 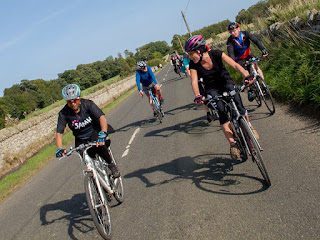 On a bright and sunny September morning, fourteen riders assembled at Fisherrow Harbour. Following the customary briefing, we headed away from the harbour towards the River Esk. We had only been under way a couple of minutes when a shout went up (that could be heard at the other side of Musselburgh), "oh no! A bird's just poo'ed on me!" We stopped and waited whilst the poor rider cleaned them self up. They were not placated by being told by several of the group, "it's lucky". Drama over, we set off again. The familiar path beside the river took us to Whitecraig where we joined the path towards Dalkeith. Leaving the path, we headed towards the road that we often take to Crossgatehall. At the junction, the leader surprised some [who thought they knew the way] by turning right instead of left. Then a left turn and we were heading towards Cousland. A sharp little climb into the village. It was now quite warm and we stopped to regroup with many shedding layers. It would remain "T-shirt weather" until lunchtime. Through Cousland, down a glorious hill, a hop across the A6093 and we were back on quiet roads heading towards Pathhead. The sun was shining, the roads were quiet and we were blessed with lovely scenery. Perfect day to be out on the bike. Just before Pathhead, we turned left onto an even quieter road. 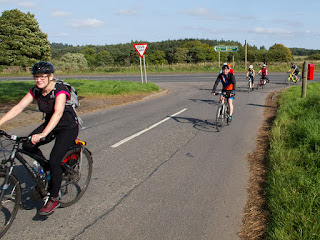 Now we were out in the country. The occasional couple of houses and a few farms were the only signs of human habitation as we rode past fields with cows, sheep and crops. One field was even shared by cows and a family of ducks. We carried on until we arrived at a T-junction. In front of us was the fast and busy A68 trunk road. Fortunately we had a good view of the road in both directions. When it was clear as far as we could see, we turned right and made our way along it in single file. After a mere 200 yards we turned onto a minor road and left it behind. We were now on a lovely deserted road riding past more fields full of sheep. We turned right at Tynehead and the road fell gradually downhill to the tiny village of Crichton. A dead end road would have taken us to the historically important ruin of Crichton Castle. Instead we took the road towards Pathhead. Another stretch of delightful quiet country road and we were heading into Pathhead. To avoid trying to turn right onto the busy A68 that runs through the village, we took to the pavement, dismounted and wheeled our bikes up to the pub where we would have lunch. The service was not very fast. But the food was good and we were made to feel welcome. 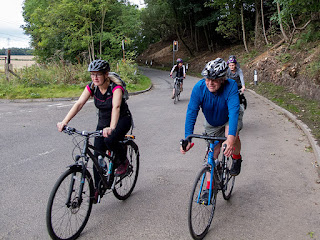 On emerging from the pub, we realised it was a bit cooler and the clouds had rolled in. Many put on an extra layer. Fortunately, it stayed dry; so no need for waterproofs. Again, it made sense to wheel our bikes down the pavement rather than join the A68 through the village. Soon we were back on lovely quiet roads. We re-joined the road we had been on earlier and retraced our steps to Cousland. That steep hill from the morning was much nicer for going down than up. We took a different route out of the village and were soon on the path towards Whitecraig. From there, the Grove took us back towards Musselburgh. Several of the riders commented on how lovely that stretch of path beside the river is. Just before the bridge that carries the main East Coast railway line, we stopped and the leader declared the ride officially over. From there some headed across the river and back towards Edinburgh, whilst others headed back towards Fisherrow and onwards to Portobello. The weather had been kind to us (especially in the morning), the scenery had been lovely, we had enjoyed riding on deserted roads. Everyone had enjoyed themselves and most could say they had been somewhere they had never been before and the only drama had been the bird incident at the very start. A perfect way to round off this year's series of Extra rides.