A few steps and lots of parks


Today's ride saw us head south-west to Colinton, followed by a big loop round to Leith and Craigentinny in the north-west. Our route took us through a number of Edinburgh's many parks, and saw us navigate several flights of steps. 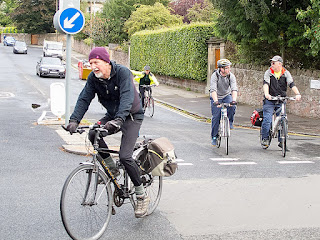 A lower than expected 18 riders assembled at the start. Despite knowing a few of our regulars were
riding through to Glasgow for the following day's Pedal for Scotland; the weather was quite pleasant - so the relatively low turnout was a bit of a mystery. At least it meant we only needed one group and we did have a couple of new faces. We left the Meadows behind and threaded our way through the backstreets of Morningside and on through Braidburn Valley Park. On through Colinton Mains Park, Spylaw Park and bypassing Colinton village, we rode through the curved Colinton Tunnel. That tunnel so reminds the writer of a scene from the film "The Italian Job", that he now finds it impossible to ride through it without whistling, "We're all members of the self-preservation society". Each to their own! We followed NCN75 before joining the Union Canal towpath. A short run along the canal and we dismounted to walk across the Slateford Aqueduct. Once across, we negotiated the steep flight of steps down to the Water of Leith path. Past the cemetery and allotments, across Gorgie Road and into Saughton Park. Major works in the park resulted in a detour that brought us out on Stevenson Drive. A twiddle through the backstreets of Saughton took us past Murrayfield Stadium and into Roseburn Park. Across the busy Roseburn Terrace and another flight of steps got us back on the Water of Leith path. We left the path at the rear of the Britannia Hotel and climbed up to Belford Terrace. From there a short ride saw us arrive at the Gallery of Modern Art - our lunch stop. The cafe was the quietest many of us had ever seen it. We quickly got served and enjoyed lunch sitting in the garden making the most of the sunshine. 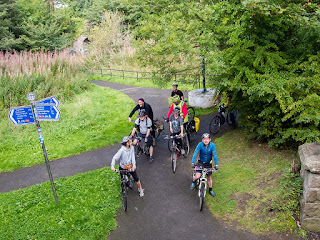 Lunch over, we made our way through Ravelston Dykes and the grounds of St George's School for Girls. Another flight of steps took us down to join the Blackhall Path. The Roseburn, Telford and Ferry Road Paths took us to The Shore at Leith via Victoria Park. From Leith Links we made our way through Lochend Park and through Restalrig to Craigentinny. Hidden away down Craigentinny Crescent, an unassuming suburban street is a most impressive mausoleum - the Craigentinny Marbles. Jim is the group's expert on its history. In his absence, David and Mike did a good job of telling the interesting story of the Craigentinny Marbles. From there, Fishwives Causeway, Mountcastle Drive North, Figgate Park and Durham Road took us back to the familiar Innocent Railway for our return to the Meadows. At lunchtime, one of the riders, new to both the group and Edinburgh had asked what the Innocent Tunnel was. So it was great for him to experience it first hand. Thanks to David for leading us on an interesting ride that despite never being too far from the city centre, showed the wide variety of what Edinburgh has to offer.