A summer meander to Dalkeith 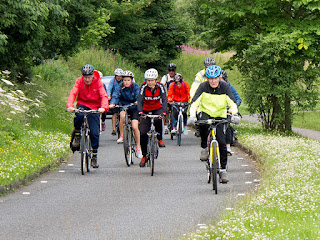 Today's ride saw us meander our way to Dalkeith on what felt like a summer's day. Summer in Edinburgh so far could best be described as mixed. The preceding week had once again given us a day of wall-to-wall rain. Against this backdrop, we were blessed with a lovely summer's day. There was a slight breeze, sometimes it was a little cool. It wasn't continuously sunny; but it was pleasantly warm without being too hot - a perfect day for cycling. Obviously the weather played a large part in us having 35 starters. As ever, it was great to see a smattering of new faces in amongst the regulars. We split into two groups and rolled away from the start. Over the George Square cobbles, we twiddled through a mixture of back streets and main roads to find ourselves in Holyrood Park via Dumbiedykes Road. We crossed Queen's Drive to join the shared path which was busy with pedestrians on such a lovely day. From St Mary's Loch we began the climb up the road towards Dunsapie Loch. This was our first climb of the day, and was made less pleasant as this narrow road was busy with cars. Half way up the hill we left the road behind and joined the path that would take us through a gate into the back streets of Willowbrae. We waited for the second group to arrive as their leader was not totally sure where to leave the road. A quite indistinct path, it would be easy to miss. All sorted, the first group moved off. The quiet roads of Willowbrae were soon behind us and we made our way into Figgate Park. Through this delightful park and soon we were held up by temporary traffic lights and heavy traffic on Brighton place. 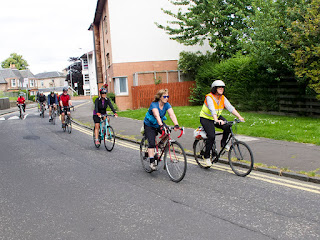 The cobbles on that road seem to get more bumpy every time we go down it. One rider was unfortunate enough to have the top part of their bell shake loose and fall in the road, where it was run over by a car. We then headed towards the beach and joined the Promenade beside the Portobello Swim Centre. Thanks to the weather, this section was very busy with pedestrians, dogs and cyclists. We took it carefully and emerged unscathed onto the road towards Musselburgh. A brief comfort stop at Fisherrow and we took quiet roads, crossed Olive Bank Road and made our way onto the lovely path beside the River Esk to Whitecraig. From there we took the busy A6094 to Dalkeith. Despite us splitting into smaller groups to make it easier for traffic to overtake, we still saw examples of reckless driving as drivers refused to be held up by troublesome cyclists. That road is probably one to avoid in future. Even the most experienced cyclists in the group didn't feel safe on it. Normally we would head into the back of Dalkeith country Park to avoid the road. But that wasn't an option due to the Dalkeith Country Show being held there. With a sigh of relief we left the road behind and twiddled through almost deserted back streets. As that bit of the route was quite tricky to follow, the leader went back to guide the second group through whilst the writer led the first group to the pub and picnic spot in King's Park. 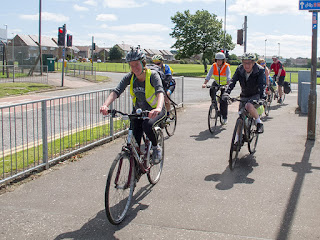 After a nice lunch either sitting outside the pub or picnicing in the park, we were ready for our return journey.  Two riders that wanted to get back quicker tranferred from the second to the first group at this point. We headed out of Dalkeith on Lothian Road and turned into the new housing estate near the fire station. The leader must have got a sore arm as he got the group through the kissing gate. There is no record of how many kisses he received! Through Waterfall Park, across Newmills Road, through another park and we were back at the horrible A6094. Fortunately, we were not going back that way. Instead, cycle paths took us back to Whitecraig via Dalkeith High School. From Whitecraig we took the Grove back towards Musselburgh. But this time we turned off and headed towards the railway station. From there we took the familiar route back to the Meadows via the Innocent Railway. Thanks to Michael for leading us to a familiar place, but by an interesting and less common route. Was great to have something akin to proper summer weather; long may it continue. Was also good to see some new faces. Hopefully everyone enjoyed themselves and we'll see them on future rides.