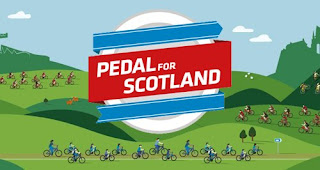 If you are planning to take part in Pedal for Scotland on 11th September, be warned. This year's event is not the usual Glasgow to Edinburgh ride, but rather Glasgow to Ingliston. The ride ends at the Royal Highland Centre, which is some nine miles short of the city centre. What's more, the early-morning buses that take you to Glasgow for the start of the ride will also leave from Ingliston. This means that Edinburgh-based cyclists will face a long and possibly dangerous ride to the start point just to get on the bus.

Getting to the bus departure point

The quickest way to cycle to Ingliston from the city centre will be along the busy Glasgow Road (A8). That's about nine miles each way, part of which involves cycling in the carriageway, taking your chances with the fast-moving traffic. It's possible to find other – less dangerous – routes, but none of these will be sign-posted, and all will add several miles to the trip.

For the day of the ride, Edinburgh Trams will relax its normal limit of two bikes per tram on services between Haymarket and Ingliston Park & Ride. Two trams per hour will carry more bikes (it's not clear how many more). But here's the snag: you will have to book your bike on the tram in advance. At present, there is nothing on either the Pedal for Scotland or the trams' website to tell you how to do that. Presumably your reservation will apply to a particular timed service. That's not so bad in the morning when you are heading for the bus. But it will mean added pressure during the ride itself to make sure you arrive back in time for your booking.

It's not just cyclists who will be inconvenienced by the change of venue. In the past, the ride has attracted friends and supporters who gather at the finish to cheer the riders on. These people will now also have to make the journey to Ingliston.

Now, the purpose of this post is not to discourage you from doing the ride. Pedal for Scotland is a great day out, and it's for a worthwhile cause. But do think carefully about the practical implications. Given the hassle involved, several of our members have decided to give the ride a miss this year, and at least one who has already booked has asked for her money back. Nobody will blame you for doing the same.
Posted by Mike Lewis at 10:27