Spring is in the air - at last! 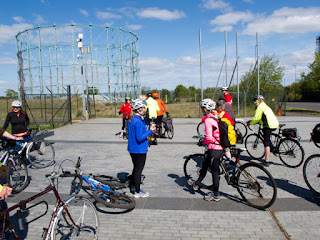 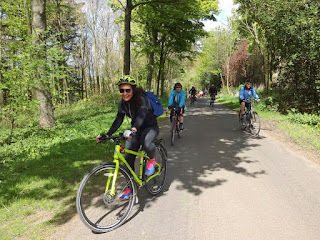 For today's ride we headed out to Craigie Farm by a somewhat less familiar route. Bright and sunny weather at the start was most welcome and must have influenced the fact that 38 riders turned up. This was the biggest turn out so far this year. Good to see a smattering of new faces and the welcome return of one of the group's stalwarts; who had been out of action for quite a few months. We had almost forgotten what it was like to split into two groups. A slight moment of panic set in when it was realised that only the leader and one other had been on the recce. Panic over. We had a leader and a second group leader, and two back markers were nominated and given a quick briefing of the route. One of the regulars realised they had a puncture just as we were preparing to leave. As ever, there were plenty offers of help. So that rider became a second group member by default. The first group set off. Puncture fixed, the second group rolled away from the start a few minutes later. We left the Meadows and headed to Leamington Bridge and the canal via Bruntsfield Links. After a very short stretch beside the canal, we headed to Fountain Park and down the Telfer subway, through Gorgie and up the zig-zags to join the Roseburn path to Craigleith. We joined the Telford path and made our way to Granton. We paused briefly beside the Granton gasometer. Even that managed to look impressive in the sunshine and it was beginning to get pleasently warm. We made our way along the busy Silverknowes Esplanade, stopping for a comfort break and ice creams at Cramond. Standing in the warm sun and looking out to Cramond Island, there was a slightly surreal moment when one of the group handed out Christmas cake. It seemed a bit strange, but the cake was lovely and greatly appreciated. The first group probably lingered longer than they realised. The second group had caught them up. This was their cue to mount up and head off. We passed the harbour and headed up the steep School Brae. Most of our rides see us whizzing down this road, so it came as something of a shock to have to climb up it. From there we headed along Whitehouse Road, turned right at the crossing and headed down to Cramond Brig before joining the path beside the A90. We carried on and made the right turn for the steep climb that took us up to Craigie Farm and our lunch stop, where the group spread out to enjoy alfresco dining. 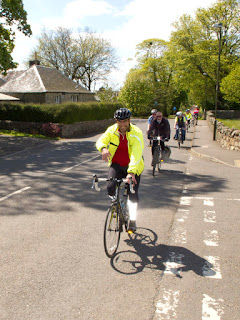 With the group suitably replenished, we headed back down the road we had come up earlier. At the bottom we turned right and headed towards Kirkliston. Before long, we turned off and made our way up a steep path beside a bridge to join the railway path towards the village of Dalmeny. One brave soul rode up the path whilst most elected to get off and push their bikes up. This delightful path took us through the trees to Dalmeny. From the village we made our way to the Dalmeny Estate. We had a lovely ride through the estate which looked resplendent in the spring sunshine with lambs gambolling around. We exited the estate and took the path beside the A90 and made our way back to Craigleith by the familiar route of Cramond Brig, Barnton and Silverknowes. We headed back down the way we had come earlier in the day. We waited as a canal boat made it's way under the raised Leamington Bridge. From there it was a short hop back to the Meadows. Even though a number of riders had peeled off as we headed back towards town; the leader insisted on leading the remainder of the group right back to the start point. No stopping short allowed here! Thanks to Verity for leading us on an interesting route to a familiar lunch stop. Thanks to the second group leader and back markers for remembering how to carry out those duties - it's been a while; and thanks to the weather for adding to the day's enjoyment.