Back on the road again

After an hiatus of 16 months, it was fantastic to have the 20 Milers rolling again. To see familiar faces and be out riding in a group again was priceless. We headed to Dalkeith Country Park by a less familiar route, overcame a locked gate, and except for the briefest of showers, enjoyed reasonable weather. It felt like a 20 Milers ride should - a much-needed touch of normality after the last year-and-a-half. 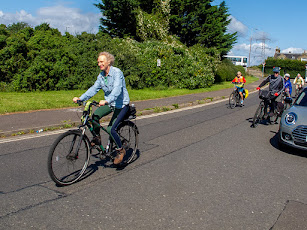 All credit to Mike who had meticulously studied the ever changing Covid-19 regulations to see when it may be possible to resume our rides. Following a few false starts, we settled for August. On the assumption that we might get 30 riders, we had two leaders and two backmarkers lined up to deal with two groups. A pleasant day dawned; not too warm, slightly overcast, a light breeze and no rain in the forecast. So it was a bit of a surprise that only 15 riders turned up. Still, only those on the mailing list were invited and the ride wasn't publicised more widely. There were no new faces, but it was great to see familiar ones and catch up.

Following a briefing from the leader, which covered Covid-19 and road safety; for the first time in 16 months, we rolled away from our starting point as a group. The Innocent Railway is currently closed due to danger of rock falls. Yes, a large number of people are using it; but in the interests of everyone's safety we were not going to risk it. This resulted in us taking an interesting and unfamiliar detour via the Grange, Mayfield, Prestonfield and the Peffermill Industrial Estate to re-join the path at Duddingston Road West. As we were leaving the Meadows, we were hit with a brief shower of light rain. The leader stopped so riders could don waterproofs. A few minutes later, the rain was gone and there was no more for the rest of the ride. Back on the familiar route, we made our way to Musselburgh and onwards to Whitecraig. From there we made our way to Dalkeith via NCN 1. Heavy traffic on Dalkeith High Street briefly delayed our entry into Dalkeith Country Park. But once through the gates, we sped downhill to our lunch stop. On the recce a couple of weeks earlier, we had our picnic lunch on the grass beside the orangery. This area was now closed. A quick scout round and we found a grassy area across the road. 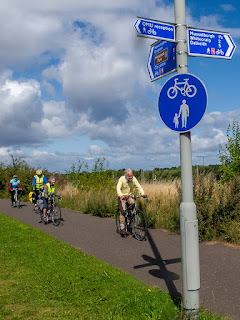 Picnic lunch over, we headed past the new Go Ape facility towards the east gate at Smeaton. We were soon brought to a halt by a locked gate across the road. Options were considered including lifting the bikes over; but a couple of heavy electric bikes in the group made that an unappealing option. The possibility of making our way through the cattle pens alongside the road was being explored when a cyclist approached from the opposite side of the gate. She explained she had ridden out that way earlier and with a deft move the gate was open. How had she done it? Although the chain was padlocked, she had noticed a carabiner link which released it easily. As they say, "it's easy when you know how". Well worth remembering when next confronted by a locked gate. We thanked the cyclist, made our way to the park exit and joined the busy A6094 for the short run into Whitecraig. From there, we retraced the morning's outward route. With the exception of a thrown chain (which was quickly sorted), the return leg was trouble-free. At the Meadows, the leader declared the ride over.

That was it, the first 20 Milers ride of 2021 was over. An enjoyable ride, bit of less familiar territory, reasonable weather, good lunch stop and a hint of excitement - what more could anyone ask for? And of course, the joy of being back riding socially in good company. Thanks to Mike for leading and Yaz for back marking. Already looking forward to September's ride. Perhaps we'll get a larger turnout.