The road to Swanston took our breath away 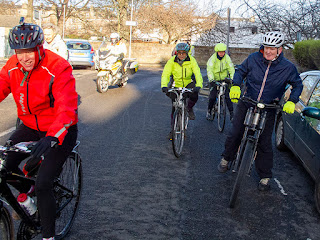 One word would sum up today's ride - wind! With Storm Ciara waiting in the wings, we knew today would be windy. Although there were strong winds right from the start, blue skies and bright sunshine gave us hope things might not be as bad as forecasted. Alas, that was not the case and the ride had to be cut short in the interests of safety. The plan was for a "themed" ride following a traditional, waymarked route: Robert Louis Stevenson's "Road to Swanston and the Pentlands". We were to follow the route he supposedly took between the New Town and the ancient village of Swanston, at the foot of the Pentland Hills. Unfortunately, we didn't even make it to Swanston before turning back.
Given the forecast, a turnout of 22 was quite impressive; certainly better than the four that set out on the January ride in truly appalling weather conditions. As ever, it was good to see a number of new riders in the mix. Bright sunshine and strong winds were the order of the day as we rolled away from the Meadows. We took the familiar route via Bruntsfield Links and the back streets of Morningside to Braidburn Valley park. Pausing at the park entrance, the leader, writer and backmarker had a quick confab about whether or not we should continue. The wind appeared to be getting stronger as the forecast had suggested, and we would be heading into much less sheltered terrain. The backmarker suggested his input would be of limited use as he said, "you know I have a rather gung-oh approach to safety!" Between us we decided to press on and reassess the situation shortly. Another confab at the park exit and the leader told the group that we would press on to Hunters Tryst where we would stop for coffee before turning round and heading back to the Meadows. Up the steep and [in places] muddy paths until we eventually emerged on Oxgangs Road. Instead of heading towards Swanston and the foot of the Pentlands, we made our way to Morrisons at Hunters Tryst for our unscheduled coffee stop. 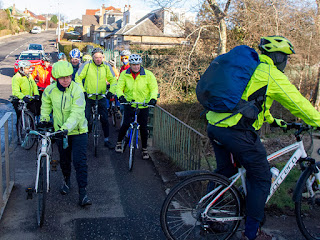 An unshortened ride and a stop for lunch rather than coffee would have been better. But in the interests of everyone's safety we had to make do with a coffee stop, which everyone seemed to enjoy. A quick whizz down Oxgangs Road North, through Oxgangs and we were back at Braidburn Valley park. From there we retraced our outward route back to the Meadows where the leader declared the ride over. It was a shame, but definitely the right call given the conditions.
Thanks to Mike for planning an interesting route that we were unable to complete, and thanks to him for making everyone's safety the priority and shortening the ride. A tough decision that perhaps wasn't appreciated by all, but clearly the right one. It's not easy being the leader. With a total of just under 10 miles covered, this was a  shortened ride; unlike the January one which was abandoned after a few miles. By way of consolation, at least there are two routes for us to complete later in the year. Fingers crossed that March offers us some better weather.

Totally was the correct decision to turn back when we did. No-one hurt and we all live to cycle another (better) day! Thanks for leading, Mike and reporting, Glenn.

Thanks for that, Graham. It's always a difficult decision to curtail a ride. I'm glad to have had your (and others') support. --Mike