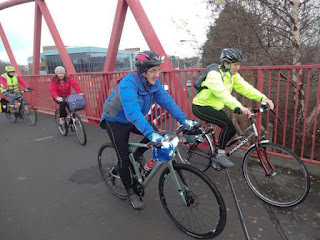 For the final full 20 Milers ride of 2016 (don't forget the shorter half day ride on Christmas Day), we entered into the Christmas spirit with a ride out to the Ocean Terminal shopping centre at Leith. A busy shopping centre two weeks before the big day, mince pies and mulled wine in Victoria Park and bike parking taken over by christmas tree sales. All of these gave the ride a festive feel. Fortunately the weather was more like an October day being reasonably bright, dry and cool with a touch of wind. The weather helped drum up a respectable 26 riders. For those opting to go cycling rather than Christmas shopping, there was a touch of irony in the destination for today's ride. Despite suffering from a cold, the leader managed to croak her way through the briefing before we set off in one group. A tough bunch these 20 Milers ride leaders! We soon left town behind us and were on the Innocent railway. Several lights were out in the tunnel, resulting in limited visibility. One rider had to stop, remove her sunglasses and switch on her lights before continuing. Beside the Range (still referred to as "Big W" by many) we turned left through the subway beneath the A1, emerging for a short stretch on the busy Milton Road. We turned right and headed over the bridge that crosses the railway and Sir Harry Lauder Road. From there we joined the busier than usual Portobello High Street. After battling with the traffic there, it was a relief to head down Bath street to join Portobello Promenade. That was much quieter and more pleasant than the high street. That took us on to Seafield and the site of the old Eastern General Hospital. We joined the cycle path towards Restalrig, crossed Lochend Road, made our way through Quarryhole Park and crossed Easter Road. We were soon on West Bowling Green Street; took a cut through path and found ourselves on the Warriston Path. We stopped in Victoria Park where the leader passed round mince pies and mulled wine. It was now starting to look a lot like Christmas. Suitably replenished, the Hawthornvale Path led us to Ocean Terminal for our lunch stop. Half of the cycle racks were unavailable as that was where Christmas trees were being sold. But we utilised the free racks and all made our way into the centre for lunch. The group split up and everyone found somewhere suitable for lunch. Many of the riders returned to their bikes with books that had been handed out in the centre. Free Christmas presents, perhaps? 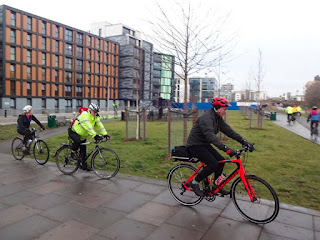 We retraced our steps and left the busy Ocean Terminal behind. Instead of returning to Victoria Park, we took the Ferry Road Path and Telford Path to Craigleith. From there, the Roseburn Path led us down the zig-zags to join Russell Road. From there the regularly used route taking in the Telfer subway, Fountainhall, the canal and back streets saw us return to the Meadows. So there ended the 2016 series of 20 Milers rides. An interesting route, welcome stop for festive food and drink and we managed to get lunch ok despite the crowds of Christmas shoppers. Thanks to Verity for leading. Probably deserves a mention in dispatches for bravely battling on despite the cold and sore throat. Let's hope for a good turnout on Christmas Day, and here's looking forward to 2017.