Fourteen for Christmas (plus Conor) 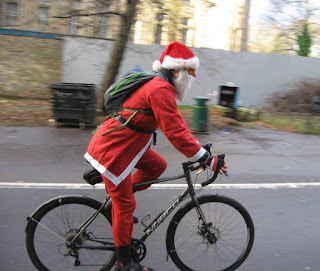 Fourteen of us gathered for our Christmas morning ride this year – including our resident Santa Claus (see photo), who attracted delighted cheers and waves from the tourists we passed along the route – not to mention a couple of requests for selfies. A less welcome visitor was Storm Conor, bringing 50 mph winds to an otherwise serene morning.

Under Jim's leadership, we set off from the Meadows, heading first for the Lochrin Basin and Fountainbridge. We weaved though Conference Square, crossed the footbridge over the West Approach Road, then into Rutland Square and Shandwick Place. We paused in Coates Crescent to admire the Gladstone Monument (unveiled in 1917, in honour of William Ewart Gladstone, MP for Midlothian 1880–1895).

Next, Jim took us on a circuit of the West End crescents. One of his reasons for this was to show us the experimental on-street bike lockers which the council have installed in Douglas Crescent. These are part of a city-wide trial to find ways of providing secure bike parking for flats and tenements. The two lockers that we saw certainly looked up to the job, but I suspect you would need an awful lot of them to meet the demand.

The next part of the ride took us back to Shandwick Place, then along the entire length of Princes Street, west to east. Thankfully, there was very little traffic– just a few buses and taxis, no trams. We stopped at the foot of the Mound in the expectation of a comfort stop, but inconveniently the toilets there were closed. Instead, we found we were able to use the facilities in one of the nearby hotels, which was a relief. 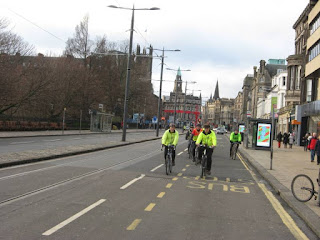 Next came the hard work of the day (well, not all that hard): the ascent of Calton Hill. The morning was still bright and sunny, so we lingered on the summit to take in the excellent views of Arthur's Seat and the Firth of Forth. Santa Claus, true to form, produced a flask of mulled wine to share; various items of confectionary were also in evidence.

Our leader eventually got us moving again. The original plan had involved heading to Lochend Park at this point, but the morning was rapidly wearing on and we had promised that the ride would end by 1 pm. So we finished up by taking a quick look at the Stones of Scotland, then headed back towards the Meadows.

Several of the group had peeled off by now, but unfortunately not the afore-mentioned Conor, who gave us more than a little trouble as we pedalled down Regent Road and Waterloo Place. The remnants of the group eventually made it back to Middle Meadow Walk. At just over seven miles, it was definitely one of our shorter rides, but also one of the more interesting.