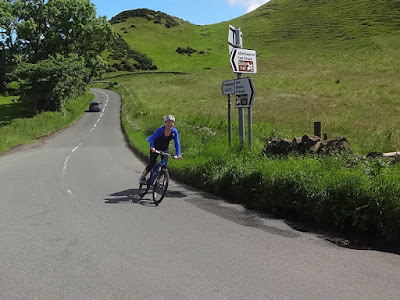 For the second 20 Milers Extra ride of the year we headed into East Lothian to tackle two substantial climbs. A lunchtime conversation led to an impromptu stop for tea and cake on the return leg. This ride started at Fisherrow Harbour in Musselburgh. As the majority of the riders were making their way in from Edinburgh; a short period of heavy rain lashed the Honest Toun. A turnout of 15 riders despite the weather was reasonable. These longer and slightly tougher rides never get the turnouts of the usual 20 Milers ones. Such a number meant we only needed one group which always makes the logistics less complicated. Although we had no new riders, it was nice to see some less frequent attendees in amongst the hardened regulars. We headed off in light drizzle on wet roads to several grumbles of "I wish I hadn't bothered to clean my bike!" Along the promenade, under the bridge that carries the main road through Musselburgh (remembering to duck) and we were soon crossing the other main road near Tesco. We were soon following the River Esk up the Grove in the direction of Whitecraig. We turned onto a muddy path just before the bridge [that carries the main east coast railway line] and made our way to the village of Inveresk. From there we followed the cycle track to the edge of Wallyford by the site of the Battle of Pinkie. There followed a short spell on a busy road that crosses the A1 before turning onto the minor road that would lead us to our first serious climb of the day - Falside Hill. A flat run in made some wonder what the fuss was about. Then the road began to climb, steepening as it weaved between hedges and banks; thus making it difficult to see what was coming next. Inevitably, this split the group with riders arriving at the summit in dribs and drabs. Several riders informed the leader that one rider had suffered a puncture on the climb. He wasn't alone. But as time passed, it appeared there may be a problem. One of the regulars volunteered to go back down and offer his help. The rest of the group waited in a layby eating cake and sweets. Eventually the three missing riders arrived and were placated with cake. It appeared that the puncture had been caused by a sea shell. How a sea shell ended up on that road, over a mile from the sea remains a mystery.
A speedy run down the other side followed and we were soon on the edge of Tranent. From there, a further downhill stretch of cycle path soon had us at Meadowmill Sports Centre. As we headed towards the main road, a fox wandered nonchantly across in front of us. After a short spell on the main road, we turned off and sped down another marvellous hill to Port Seton. We were making good progress along the coast road when a shout of "puncture" brought the group to a halt. It was the same unfortunate rider as before. This time a sliver of glass being the culprit. Once fixed, we were on our way again. It was looking as if it was going to be quite a late lunch today. At least it was dry and the sun was making a welcome apperance. We were soon heading down the lovely Longniddry railway path. It was a bit muddy in places, but didn't slow us as we headed towards Haddington and lunch. Lunch was taken sitting outside a pub in the market square. During lunch the conversation turned to afternoon tea and cakes. Talk about a cycle group that rides on it's stomach! This was when the impromptu afternoon tea stop plan was hatched. 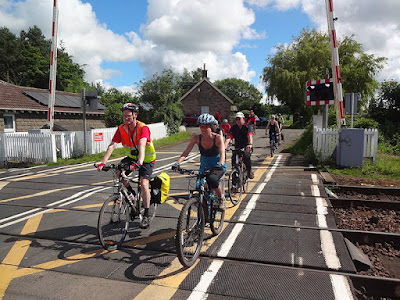 Within a few minutes of setting off, all thoughts of afternoon tea were put to the back of our minds. So soon after lunch we hit the second major climb of the day - the Garleton Hills. Just like Falside had done in the morning, this climb soon had the group very strung out. This was a busier, but wider road and it was easier to see what lie ahead apart from a few devious false summits. The run down the other side was glorious with twists and turns to make it more fun. We regrouped, and after a rest and some sweeties we made our way past the Hopetoun Monument. Another little hill followed, before we left the main road behind. For the next few miles we had the pleasure of some typical quiet East Lothian lanes. We carried on to a level crossing. No trains to hold us up. So we crossed the railway and busy A198 dual carriageway to find ourselves on the cycle path heading to Seton Collegiate Church. We headed down to the coast at Port Seton via the same road we had taken in the morning. This time we headed west rather than east. We passed the lovely Port Seton Harbour and arrived at Cockenzie House. This was our impromptu afternoon tea stop. The cakes there are amazing. It is very difficult to cycle past without going in. It has also been a very popular lunch stop on rides in the area. It was now very warm and sunny, making it difficult to get up and ride again. But we managed it. We had a short stretch on the coast road, turned off onto the John Muir Way and headed back into Musselburgh via the racecourse. Along Goose Green, over the bridge, down the side of the Esk, along the promenade and we were back at Fisherrow Harbour. The leader declared the ride over and everyone began to make their way home.

The weather at the start made it look likely that a wet day may have been on the cards. Fortunately that was not the case at all. Blue skies and sunshine had even led to suncream been applied before the day was over. Like the weather, the ride had been varied and interesting. The two hills having thrown in a bit of a challenge. The debate of which hill is the toughest doesn't look set to be settled anytime soon.