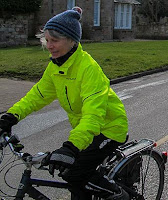 Today's ride saw a welcome return to our traditional format: a full-day run of twenty or so miles with a proper lunch stop. This was after two months in which, because of Covid restrictions, we limited each ride to half a day with no cafe or pub stop. It was gratifying to see 24 riders, including many of our regulars, turn up for today's event.

The ride was led by Iain Pearce, making his debut as a 20-Milers ride leader. Our destination was Roslin, but because the direct route to that village is only about 16 miles round trip, Iain decided to add a few interesting wiggles to make up the length. It's always good when we can find unfamiliar bike routes, and today's ride succeeded in doing just that.

After the usual briefing and safety advice, we headed down Middle Meadow Walk and across Bruntsfield Links before tackling the stiff climb up to Hermitage Drive. A bit more climbing took us up to northern flank of the Braid Hills, where we paused for a few moments to take in the view over the city. The weather at this point was uncertain, with a weak sun struggling to emerge from the clouds, and while it was not actually raining, the air had a definite dampness to it.

Almost immediately after reaching Alnwickhill Road, we cut through a diminutive gap between some houses to emerge on a path running alongside Liberton Park and what used to be the Alnwickhill Reservoir, now a housing development. This was the first of several parts of today's route which were new to me, and I suspect to many others in the group. 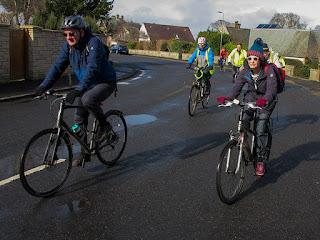 After crossing Liberton Gardens, we continued on a wiggly route through the back doubles of Gracemount and Gilmerton Dykes – again, unfamiliar territory for many of us - before reaching the City Bypass at Gilmerton Station Road. From here, the route followed the more familiar Roslin bike path, which uses the old railway line through Loanhead and across the Bilston Glen viaduct. We reached Roslin a few minutes after noon. About a third of the group found some nice spots for a picnic, with most of the others heading for Dolly's Tea Shop.

For the return leg, we retraced our steps as far as Gilmerton Station Road. The bike path here is well-surfaced and almost completely flat, and with the wind behind us it made a pleasant start to the afternoon. After crossing back over the bypass, we stayed on the path for another four miles or so, heading towards Shawfair (lots of new housing) and Newton Village. Until a few years ago, this path was little more than a muddy track alongside a field, but it has been upgraded into a wide, well-surfaced path with good lighting. As a bonus, this part of our route was gently downhill the whole way.

Leaving the path, we followed the road through Danderhall, and then through Little France Park and Craigmillar Castle Park. At this point, we were hit by two minor inconveniences: a sudden heavy rain shower, and a mechanical problem involving a recalcitrant chain. Fortunately, the rain stopped almost as quickly as it started. The mechanical problem took a little longer to sort out, but before too long we were on our way again.

The final leg took us across Peffermill Road, through the Peffermill Industrial Estate and on to the Innocent Path. After heading up the Innocent Tunnel, we made our way back to the Meadows. At 21 miles, it was a very pleasant run, with several innovative sections of route, a good lunch stop and a successful debut for the leader.