A half day January meander

Despite the rapid increase in Covid cases, it was decided it would be safe for today's ride to go ahead, but without a cafe or pub lunch stop. Instead, it would take the form of a half-day ride aiming to finish by 1300. Given this is January in Edinburgh, a picnic outdoors lunch option was quickly discounted. The leader decided to plot a route that would be quite meandering, but never too far from the centre of town for those wishing to peel off early. He also opted to stick with the full 20 miles distance and see how that panned out. 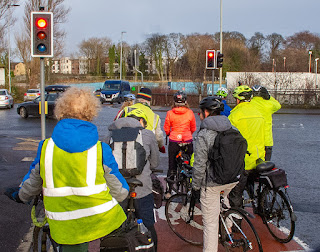 Given the change in format and forecast of changeable weather, a turnout of eleven riders was not overly surprising. As it happened, the weather was kinder than we had dared hope. It remained dry, was cool rather than cold and we even had some pleasant winter sunshine. Following the customary briefing, we took the familiar route to the Leamington Bridge via Bruntsfield Links. We remained on the canal, leaving at Ashley Terrace. We passed George Watson's College Recreation Ground on Myreside Road before turning left into Craighouse Gardens. Apart from the leader and back marker, no one else was familiar with the route. Making good progress on a flat stretch of road was fine until we turned off and were confronted with a stiff little climb into Morningside Park. Many were caught out being in too high a gear. We pressed on through Greenbank and the new housing development built on the site of the former City Hospital. At this point, a senior member of the group said, "I know all the places we've been to, but don't think I could easily thread them together into one ride". We joined the path through Colinton Mains Park, before heading through Oxgangs and finding ourselves on the quiet residential roads of Swanston. After crossing of the busy Biggar Road, quiet roads and muddy paths saw us emerge onto Frogston Road West. A fast downhill run and we were at the Mortonhall Garden Centre. 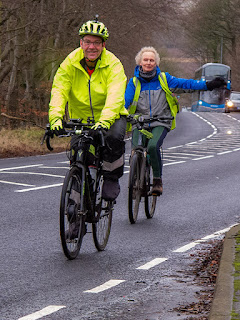 What would have been our lunch stop became a comfort stop instead. Past the caravan site, and we had some muddy and icy stretches of path to contend with before emerging on Braid Hills Drive. A right turn on Braid Farm Road, down Braid Hills Avenue and we arrived at the familiar Braidburn Terrace. Through Braidburn Valley Park and we joined the paths we had ridden earlier, but now in the opposite direction. At his point the back marker said, "we're now on the second loop". Someone was heard to say, "what? We're doing the whole ride again?" We made our way through Colinton to join the Water of Leith path. Onwards through Colinton Tunnel with its lovely murals, past the Water of Leith Visitor Centre, through Saughton Park, past Murrayfield and Roseburn Park and we were at the Russell Road zig-zags. A few riders peeled off there, with the remainder heading back to the Leamington Bridge. There the leader declared the ride officially over at just after 1330.

Thanks to Neil for leading us on a meandering, varied and interesting route that never ventured too far from town. And well done for adapting it at short notice to fit the half day format. Thanks also to Alison for her first stint as back marker.