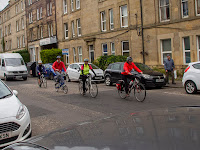 Today's ride started out with nothing to set it apart from any other of our rides. But a chance comment led us to realise it was in effect the ride to mark the 15th anniversary of the 20 Milers. As the comment wasn't made until we were a few miles into the ride, no mention of the anniversary was made at the briefing. The leader took us on a somewhat meandering route to Heriot Watt University at Riccarton. It stayed dry all day, and whilst it was not particularly cold, it was quite windy. We made our way out into a noticeable headwind, but a tail wind meant we were almost blown back to town. Another notable thing from today's ride being a new backmarker stepped into the breech and did a splendid job. 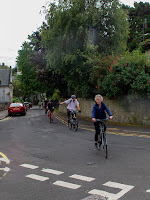 A cool and windy morning saw 23 riders assemble at the start. That's always a good number as we can get away with one group, thus avoiding the logistics of having to split into two. After the customary briefing, we rolled away to join the canal at Leamington Bridge via Bruntsfield Links. We stayed on the canal as far as Ashley Terrace where the group got split and delayed by temporary traffic lights. We regrouped and made our way through the back streets of Merchiston and past the George Watson's College sports ground on our way to Greenbank. Along the quiet roads of the housing estate near Redford Barracks and we emerged onto the busy Redford Road. Mike was talking to the writer when it dawned on him that the group had begun in September 2004 (the exact date is lost in the mists of time), thus making it 15 years to the month since the first ride. So in effect, we were on the 15th anniversary ride. Onwards through the back streets of Colinton and we arrived in Bonaly where we stopped as the leader passed sweeties round. From there we took the Water of Leith walkway as far as Riccarton. We took the back way into the Heriot Watt campus off Curriehill Road and got a shock as we arrived in the large cafeteria. Usually there are about half a dozen other customers and we would get served quickly. Not today. The university was having an open day and the cafeteria was heaving. 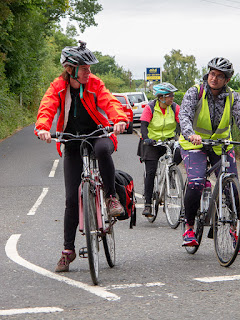 Whilst lunch took slightly longer than usual, everyone got fed and soon it was time to begin our journey back to town. Within minutes of setting out we had lost the leader. He had made a right turn which the following rider had missed and everyone else had followed. We were soon back on the right track concluding that the confusion had been caused by the appearance of a brand new building that wasn't there last time. All back together, we left the campus behind and crossed the busy Calder Road. Via Hermiston House Road, Gogarbank, Gogar Station Road and the subway we arrived at Edinburgh Park. We followed the tram line through Broomhouse and Stenhouse, leaving it at the Jenners Depository to make our way to Murrayfield Stadium. From there we made our way back to Leamington Bridge via Roseburn Park, Russell Road, Dalry Road, the Telfer Subway and Fountainbridge. The familiar route took us back to the Meadows where the leader declared the ride over. As we rode through the Meadows a man came towards us on a mountain bike being pulled along by two Husky dogs. Needless to say, he barely needed to pedal. A number of us thought what a good idea for our next ride, especially for steep hills.

Thanks to Neil for leading us to a familiar location by an unfamiliar route. Sometimes a little fore thought and planning is all it takes to mix things up and make an old ride seem like a new one. We may do twelve rides a year and have been doing them for fifteen years, but we are far from running out of places to go or interesting ways of getting to them. Last but by no means least, thanks to Yaz for doing a great job of back marking on her first time in the role. Well done. Next step will see her leading a ride.

A 'virtual trace of the route may be found at the link below. Feel free to embed if possible?